Governor Andrew M. Cuomo today kicked off the PGA championship by announcing Free Youth Golf Day, a statewide event offering youth 18 and under a free round at all 28 New York State Parks golf courses. The event will take place on July 20 and serve to introduce children across the state to the game and the opportunities available at New York State Parks. The PGA Championship at Bethpage State Park is currently underway through Sunday, May 19.

"I'm excited about today and I'm excited about the PGA of America and what they've done. We want to encourage and grow the sport of golf in New York. To help encourage that, the State is going to sponsor an event on July 20th where anyone under the age of 18 years old can golf for free at any of our state facilities," Governor Cuomo said. "It's a nice way to get young people out to experience the game, and I think once they experience it and they understand it, they will be hooked, so we look forward to doing that."

"The PGA Championship is expected to attract hundreds of thousands of visitors to New York," said Lieutenant Governor Kathy Hochul. "We're encouraging more young people to utilize our golf courses across the state, and the Free Youth Golf Day will help to support increased activity and participation. New York has some of the best golf courses at our state parks, and programs like these build on our efforts to promote recreation and tourism statewide."

New York State Parks golf courses are now open for the season. Some of the best courses and golf values in New York can be found within state parks, including the famed Black Course at Bethpage State Park - the site of two previous U.S. Opens, the 2019 PGA Championship and 2024 Ryder Cup; the Robert Trent Jones-designed Green Lakes course, James Baird and Montauk Downs courses; and the championship course at Saratoga Spa. Tee times can be booked online for many of the New York State golf courses here.

Under the NY Parks 2020 initiative, Governor Cuomo has made a tremendous financial commitment to New York State Parks, providing $1 billion for parks over the last eight years. This includes $17.5 million for state golf courses to fund improvements like irrigation systems, cart paths and clubhouses, with a nearly $2.6 million investment into Bethpage State Park to host the PGA Championship, upgrading the clubhouse, parking lots and walkways, and improving the Black Course.

"State Park golf courses offer great value and some of the most challenging play in the country," State Parks Acting Commissioner Erik Kulleseid said. "I applaud Governor Cuomo for helping to support youth golf in New York State. We look forward to seeing our regular golfers and many new visitors hitting the links soon."

The State is going to sponsor an event on July 20th where anyone under the age of 18 years old can golf for free at any of our state facilities. It's a nice way to get young people out to experience the game.

Nassau County Executive Laura Curran said, "I am proud to welcome the storied PGA Championship to Nassau County for the first time in the tournament's history. Bethpage is special because it's a challenging, world-class course that anybody can play. I'm grateful to Governor Cuomo for waiving the fee for youth players on July 20th so that any young person who wants to can play off the same fairways as the pros who will compete this week."

Suffolk County Executive Steve Bellone said, "Long Island is no stranger to hosting world-class sporting events and we are excited to welcome back the PGA Championship to Bethpage Black, one of our Island's crown jewels and among the best in the nation. I want to thank Governor Cuomo for his efforts to bring this tournament to one of New York's many outstanding state parks, which will provide enormous economic benefits and showcase Long Island front and center."

Senator Kevin Thomas said, "This is an exciting week for golf and Bethpage Black with the PGA Championship in Nassau County. Up to 200,000 spectators will watch the action live this weekend. But it doesn't have to end at the 18th hole Sunday. On July 20, Governor Cuomo is waiving greens fees at all state park golf courses for the next generation of golfing greats ages 18 and under."

Assembly Member Chuck Lavine said, "It is very exciting to welcome the 101st PGA Championship Tour to Long Island. Opened in 1936, the Bethpage Black has served as one of the premier courses available to local residents and avid golfers from across the state. Thanks to Governor Cuomo and the State Parks Department, on July 20th, New Yorkers age 18 and under will have the opportunity to play where the pros play for free when all green fees are waived for youth at each of New York State's courses."

Assembly Member Michael Montesano said, "It is very exciting that Bethpage State Park will be hosting the 101st PGA Championship this week. With over 200,000 visitors in attendance, this will be a significant boon to the local economy and a great opportunity to showcase all Long Island has to offer. I hope everyone has a great time visiting our community and wish those competing in the championship the best of luck."

More than 200,000 spectators are expected to attend the 101st PGA Championship at Bethpage State Park in Farmingdale. The weeklong event, taking place through May 19, is expected to provide an estimated economic impact of more than $120 million to the region and will feature food and beverages from the State's agriculture industry on the course. More than 1,100 full and part-time jobs have already been created as a result of the PGA Championship. 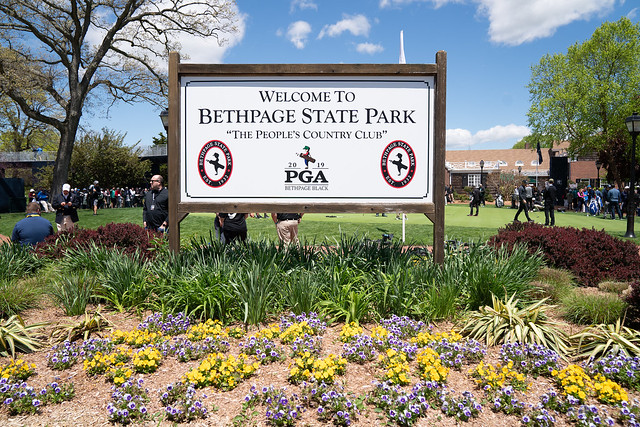 The PGA Championship also provides an opportunity to promote some of the state's industries. I LOVE NY and New York State Parks will host the "New York State Experience" in the Fan Zone to promote the state's premier courses, golf getaways, and travel options. On the course, spectators can visit the Taste NY Concession, located at Hole 14, which will feature food and beverages from Long Island and across the State. The menu includes grab-and-go snacks, such as North Fork potato chips (Cutchogue, NY) and Beigel's Bakery black & white cookies (Brooklyn, NY), as well as classic New York specialties made from locally sourced ingredients, such as Beef on Weck, Southern Tier Spiedies and a New York State cheese plate. It will also offer craft beer and wine from across the State.

To continue to promote New York's growing craft beverage industry, Taste NY has partnered with the NYS Wine and Grape Foundation and Opici Family Distributing to spotlight award-winning New York wines at the Wanamaker Club hospitality area at the tournament. In addition, the New York Wine and Grape Foundation is hosting tastings of New York wines in the Chase Sapphire Lounge at select times.

Empire State Development President, CEO and Commissioner Howard Zemsky said, "New York's State Parks are a jewel in our tourism crown and Free Youth Golf Day will welcome kids and families inspired by the PGA Championship at Bethpage to enjoy a day out at one of our one of State Parks courses."

State Agriculture Commissioner Richard A. Ball said, "We're excited to welcome the PGA Championship to Bethpage State Park and to be a part of this major event. Our Taste NY program and products will be featured near Hole 14, and our state's best wines will be featured in special tastings, showcasing our farms and food and beverage businesses and allowing visitors to enjoy some of the best food and drinks that New York State has to offer."