Ribbon-Cutting Kicks Off Opening Day; Welcomes Visitors to the Most Anticipated Fair in Decades

Governor Andrew M. Cuomo today kicked off the newly transformed 2016 Great New York State Fair, less than one year after unveiling his sweeping $50 million plan to revitalize the fairgrounds in Onondaga County. The monumental improvements to the fairgrounds will significantly enhance the experience for visitors and ensure the fair remains a top economic engine for the Central New York region. Following a tour of the newly transformed fairgrounds, a crowd of more than 400 guests joined the Governor at a ribbon-cutting celebration to kick off opening day and welcome visitors to the most anticipated fair in decades.

The Governor also announced IndyCar’s return to Watkins Glen International for the Grand Prix and return in 2017 and 2018. Visitors who purchase a ticket to the 2016 New York State Fair will receive $5 off entry to the IndyCar Grand Prix. The race will take place this Labor Day Weekend from September 1 – 4, 2016 and coincides with the free symphony concerts offered at the Lakeview Amphitheater and free fishing for kids in Onondaga Lake for a complete Labor Day Weekend experience.

“The Great New York State Fair is a central piece of our history, culture and economy, and with these unprecedented renovations, we are making it bigger and better than ever before,” Governor Cuomo said. “From the largest ever midway and the completely redesigned main gate to the Empire RV park and the brand-new Taste New York market, the Fair has undergone a transformation that is going to attract new visitors and continue driving economic growth in the region. By bringing IndyCar back to Watkins Glen, we are creating jobs, driving tourism and continuing to move upstate New York forward. I encourage New Yorkers and visitors alike to come check out the State Fair this summer and experience the very best the Empire State has to offer.”

The 375-acre fairgrounds have undergone the most significant transformation since the New York State Fair first opened its gates in 1890. Prior to the Governor’s sweeping $50 million plan to redesign the fair, the New York State Fairgrounds have remained essentially the same for over a century– no major redesign has been undertaken and investments have been for basic rehabilitation such as repairs of roofing systems, electrical systems, water and sewer mains and roadways. The lack of green areas, storm water infrastructure and rain collection systems caused severe flooding during rainstorms.

Upgraded Facilities
Today, significant construction improvements have been made on key components of the Governor’s plan, including: the dramatic new Main Gate— the arches of which recall the carriage gate that greeted fairgoers in 1900, the larger, 15-acre Wade Shows Midway that will hold more rides than ever, and the brand new 315-site Empire RV Park that is equipped with underground water, sewer and electrical service.

Additional changes are visible throughout the grounds. Vendors have been moved out of the historic area and into the fair’s new region for vending and activities on either side of the new boulevard known as Broadway. These improvements allow for more open spaces throughout the grounds with more seating and shade, and more misting stations to help cool fairgoers on hot days.

More plants and new trees have been planted and new energy-efficient LED lighting has been placed in the new areas of the fairgrounds. New uniform signage easily identifies the fair’s many historic buildings. The upgrades will be complemented by the addition of dozens of new rides, events, food vendors and exhibits at this year’s fair. A detailed list can be found here.

The Great New York State Fair is a central piece of our history, culture and economy, and with these unprecedented renovations, we are making it bigger and better than ever before.

New Exhibits and Activities
As a new addition this year, two free symphony orchestra concerts will be held at Onondaga County's Lakeview Amphitheater to celebrate the revitalization of the western shore of Onondaga Lake. The Syracuse-based orchestra, Symphoria, will perform at 7:30 p.m. on August 29 and September 1 in shows that are free with regular fair admission. A fireworks display will take place after the September 1 concert.

An all-new Taste NY Market is located inside the landmark Horticulture Building. Guests will have the opportunity to enjoy everything New York, from artisan cheeses and gourmet nuts, to local wines, craft beers, spirits and more. Visitors in the Taste NY Market will have the chance to try free samples of food and beverages from all 76 participating New York vendors and to meet the people behind those products.

On September 3, the Department of Environmental Conservation will offer free fishing at Onondaga Park. Kids of all ages will be eligible to fish and win prizes. From 8 a.m. to 10 a.m., a friendly fishing competition will take place between Bassmaster Elite pros and B.A.S.S. Nation local fishing pros. The anglers will launch from Onondaga County Park in Syracuse and fish on the newly revitalized Onondaga Lake. Kids and families will be able to meet-and –greet with BASS pros over the Labor Day Weekend. 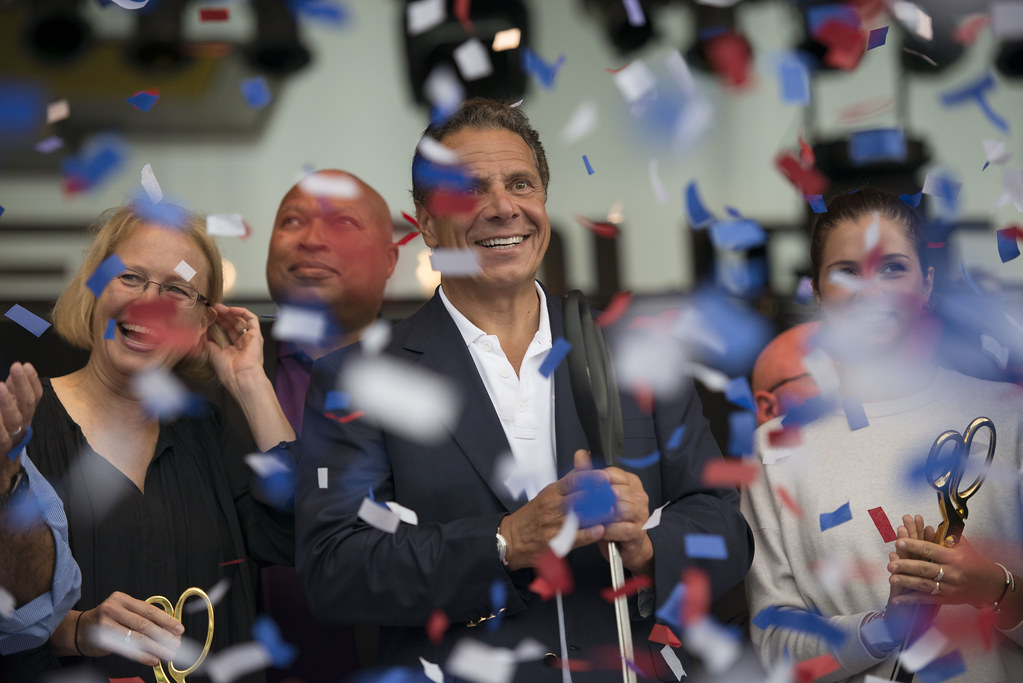 Free Giveaways
This year, every hour between 11 a.m. and 7 p.m., eight lifetime passes to the Great New York State Fair will be given away to fairgoers. Visitors can stop by the I LOVE NY Pavilion and provide their name, address and phone number to be entered into a random drawing to win a lifetime pass to the fair. Winners will be announced by the New York Lottery’s Yolanda Vega. T-shirts will also be given away to the first 5,000 guests who enter the fair. The T-shirts feature a commemorative Great New York State Fair image and will be distributed at Gates 1-4 upon entry.

IndyCar Grand Prix
This Labor Day Weekend, from September 1 – 4, 2016, IndyCar will return to Watkins Glen International for the IndyCar Grand Prix. New York State’s support of the Glen was critical in securing an additional two-year agreement, ensuring IndyCar’s return to the Finger Lakes in 2017 and 2018. Through the iconic I LOVE NEW YORK campaign, a commitment of $100,000 per year will support the Glen’s promotion of the world-renowned IndyCar Grand Prix and invite tens of thousands of race fans from across New York, Pennsylvania, New Jersey, and Canada, to the Finger Lakes region. Visitors who purchase a ticket to the 2016 New York State Fair will receive $5 off entry to the IndyCar Grand Prix.

The IndyCar Grand Prix adds to the increasing number of major events taking place at the Glen, a result of the $9.7 million investment to upgrade the speedway’s surface to meet necessary safety requirements for racers. Through the Governor’s Regional Economic Development Council initiative, a $2.25 million grant was awarded to support the completion of track renovations, allowing for the return of the IndyCar Grand Prix for the first time since 2010.

Watkins Glen International has an annual economic impact of over $200 million and more than 830,000 visitors attend events each year – making The Glen an anchor tourist attraction in the Finger Lakes Region. Promotion of the Glen will be brought to new heights when the IndyCar Grand Prix is televised live on ABC and NBCSN in the United States, and through ESPN International, which brings racing events to millions of homes throughout another 212 countries.

Commissioner Richard A. Ball said, “It’s exciting to see the dramatic improvements to the fairgrounds that not only highlight its historic beauty but also feature modern amenities to improve the experience of the Fair’s nearly one million visitors. As a result of the Governor’s vision, starting today, fairgoers will experience a new Fair, one that is still true to its tradition of promoting all things agriculture and providing great entertainment and family fun, but one that also looks to the future and lays the foundation for another 175 years of success.”

Acting Fair Director Troy Waffner said, “We have worked hard this past year to implement the Governor’s plan, showing the world that the Great New York State Fair is not only the oldest fair in the nation, but it is also the greatest fair in the nation. The fairgrounds have been reinvigorated and the changes will leave a lasting impression—from the beautiful new gate that will greet our visitors to the more open, comfortable midway. I can’t wait for fairgoers to visit us and see all the changes we have in store for them.”

Empire State Development President, CEO & Commissioner Howard Zemsky said, “Thanks to the commitment of Governor Cuomo and a lot of hard work at both the local and state levels, New York is the place to be – offering something for everyone, from local artisans, craft beverage businesses and midway rides at the Great NYS Fair, to action-packed races during the famed IndyCar Grand Prix at Watkins Glen International. All roads lead Upstate and we invite everyone to make the trip and experience two of the region’s top tourist attractions.”

Michael Printup, Watkins Glen International President said, “In the end, this was the goal of both Watkins Glen International and INDYCAR – to announce a multi-year agreement. We are very much looking forward to next weekend’s Grand Prix at The Glen, and can’t wait to get started with our efforts to grow this event moving into the 2017 season. Of course, this would not be possible without the outstanding support that we receive from New York State and Governor Cuomo. It’s just a great day and a very exciting announcement for our fans and partners.”

IndyCar President Jay Frye said, “For many New Yorkers, Watkins Glen holds a special place in their hearts. This iconic raceway brings together thousands of fans, family and friends each year and we are proud to be back at The Glen through the 2018 season. We thank Governor Cuomo for his continued support and for making INDYCAR’s return to this region possible. We are excited to cap off the great New York State Fair this Labor Day Weekend and celebrate the INDYCAR Grand Prix with all New Yorkers.”

Senator John A. DeFrancisco said, “From the newly renovated Midway, to the improvements at the RV Park and the new Main Gate, the Great New York State Fair is now home to the 21st century amenities that it deserves. This is an important example of how New York state is investing in Central New York’s assets to promote tourism and generate new economic opportunities in the region, and I thank Governor Cuomo for making these improvements possible.”

Senator Tom O’Mara said, “The excitement just keeps building for the return of IndyCar racing to The Glen on Labor Day Weekend and so today’s news that we can look forward to this racing for at least two more years is just outstanding. Our thanks to Governor Cuomo and his team for their continued support of racing in Watkins Glen. The INDYCAR Grand Prix at The Glen, on the track’s newly repaved surface that drivers and fans alike continue to give outstanding reviews, promises to be one of the circuit’s premier events and yet another top-flight attraction for the Finger Lakes and Southern Tier regions, and all of New York State.”

Assemblyman Bill Magnarelli said, “The New York State fair attracts hundreds of thousands of people every year, and with these renovations, we will continue attracting visitors and tourism dollars to our region for generations to come. The rebirth of this fair is a symbol of the revitalization of Central New York and all of upstate and I thank Governor Cuomo for his commitment to making this fair better than ever. I look forward to continuing our work together to generate opportunity throughout the region and look forward to our future progress.”