Governor Cuomo, Joined By Leaders of the TIME'S UP Movement, Signs Legislation Extending Rape Statute of Limitations in the Second and Third Degrees

Key Component of the Governor's "Women's Justice Agenda: The Time is Now" Campaign

"There has been an ongoing and pervasive culture of sexual harassment and abuse in our society, and it is made worse by the fact that victims of second and third degree rape only have five years to bring a legal claim against their attacker. Five years is an insult to these survivors and today we're providing them more time to come to terms with the trauma they experienced and to seek justice," Governor Cuomo said. "This new law recognizes the injustice that has gone on for far too long and honors all the women who have suffered this pain and all the advocates who had the courage to come forward and tell their story so that other women may be spared the pain."

"As a critical part of our Women's Justice Agenda and in partnership with TIME'S UP, this action will enable New Yorkers to seek justice and help ensure more rapists are held accountable," said Lieutenant Governor Kathy Hochul. "In New York, we are committed to changing the culture, combating sexual harassment, and protecting women against violence. Extending the statute of limitations for rape is a significant step forward for victims across our state."

Statutes of limitations on rape cases impose a ticking clock on how long victims are able to come forward if they want to seek charges. Over the last year, victims who have suffered in silence for decades have bravely spoken about their abuse, and also have laid bare the state's limited ability to prosecute their abusers due to the passage of time. These victims have also changed the culture of silence, empowering other victims to speak out against their abusers and providing them with a platform to come forward. In recognition of this fact, states across the country are lengthening or eliminating the statutes of limitations on crimes of sexual violence.

New York is a national leader in the fight against sexual harassment and this year Governor Cuomo enacted sweeping new workplace harassment protections to build on the state's nation-leading comprehensive sexual harassment package. In August, the Governor signed legislation to strengthen New York's anti-discrimination laws to ensure employees can seek justice and perpetrators will be held accountable by eliminating the restriction that harassment be "severe or pervasive" in order to be legally actionable; mandating that all non-disclosure agreements allow employees to file a complaint of harassment or discrimination; and extending the statute of limitations for employment sexual harassment claims filed from one year to three years.

This new law recognizes the injustice that has gone on for far too long and honors all the women who have suffered this pain and all the advocates who had the courage to come forward and tell their story.

Senator Alessandra Biaggi said, "Speaking from my own experience of staying silent after surviving sexual abuse, it can take decades for a person to come forward and feel ready to pursue justice against their perpetrator. By extending the statute of limitations for certain offenses of rape, sexual criminal acts, and incest, New York state is adopting procedures that allow survivors of sexual violence to report on their own terms. I thank Governor Andrew M. Cuomo and Senate Majority Leader Andrea Stewart-Cousins for their commitment to seeing this legislation through. It is critical that we continue to enact laws that hold offenders accountable, and prioritize the safety and wellbeing of survivors."

Assembly Member Aravella Simotas said, "Our culture teaches people not to be raped instead of teaching people not to rape. By updating our laws, we are sending a strong message that survivors matter, their stories matter and New York will not deny anyone accessible means to justice. I am proud that we are finally providing survivors an adequate window of time to process their trauma. I thank Governor Cuomo, Senator Biaggi, the advocates from Times Up and my partners in the Legislature for understanding the urgency of prioritizing these reforms." 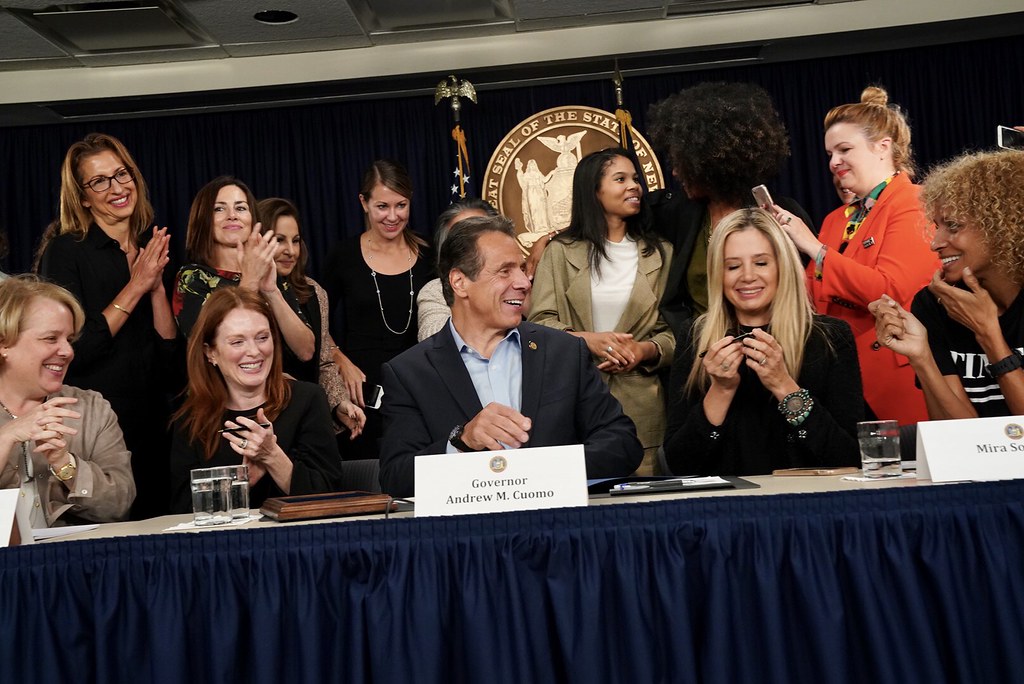 Julianne Moore, one of the 300 women in the entertainment industry who helped launch TIME'S UP in 2017, said, "Thank you so much to Governor Cuomo and the New York State Legislature for passing this very important bill. I am proud to be a New Yorker and grateful that so many survivors will be able to seek the justice they deserve."

Mira Sorvino, who traveled to Albany, along with TIME'S UP leaders Leslie Silva, Carmen LoBue and Robbie Kaplan, to advocate for the bill, said, "The signing of this bill is a watershed moment, a real advance in the battle against rape culture not only in New York but across the country. Because of it more survivors can now have their rightful day in court and a chance for justice."

Actress and TIME'S UP Activist Michelle Hurd said, "Today, Governor Cuomo and state leaders are taking a historic step to right what's wrong in the law and ensure that countless survivors in New York can get the justice they so deserve. No longer will New York State have an unjust expiration date on justice for survivors of rape."

Sonia Ossorio, President of the National Organization for Women - New York, which led the fight to eliminate the statute of limitations on 1st degree rape and advocated for reform of 2nd and 3rd degree rape, said, "Rape is a crime that rips at the fabric of our society and today New York is saying every single one of us has a right to seek justice. This is a great victory for the women, men and families of New York. We applaud Governor Cuomo for his leadership on this important issue and for standing in solidarity with survivors."

Jennifer Klein, Chief Policy and Strategy Officer at TIME'S UP said, "I am so proud to witness the Governor sign this important bill into law. We hope this bill inspires future measures to ensure safe, fair and dignified work for women of all kinds."

Alysia Reiner, an active member of TIME'S UP's network in New York said, "I'm so grateful to be here today, witnessing the power of women coming together and advocating for each other. From TIMES UP's beginning, we had a goal of systematic legal and government change to protect survivors and future victims of sexual violence and harassment, and it's deeply rewarding seeing it happen today."

Robbie Kaplan, co-founder of the TIME'S UP Legal Defense Fund said, "This bill signing is only the tip of the iceberg. In the past two years, we've built a powerful and unstoppable movement for equity and justice. There's no turning back. Stay tuned."