Governor Andrew M. Cuomo, joined by Billy Joel, today signed legislation (S.2316 (Kaminsky)/A.2572 (Englebright)) to ban offshore drilling in New York State waters. The legislation will bar the state from granting permits for drilling, or oil or gas exploration in offshore areas controlled by the State. The ban will protect New York's waters and coasts by making it more difficult for oil and gas drilling to occur close to coastal New York, even in waters controlled by the federal government. In addition, the legislation prohibits the leasing of State-owned underwater coastal land that would authorize or facilitate the exploration, development, or production of oil or natural gas. The Governor signed the bill in direct response to the Trump administration proposal to open U.S. coastal areas to drilling.

"This bill says no way are you going to drill off the coast of Long Island and New York, because we must lead the way as an alternative to what this federal government is doing," Governor Cuomo said. "Today is about making sure Jones Beach and all of the coastal communities are here for our children and for the next generation. We must make sure we leave this world a better place for them because our job as parents, as citizens, as human beings is to pass it on better than you found it."

"This legislation to ban offshore drilling in New York's waterways is part of our ongoing efforts to protect our water quality and reduce greenhouse gas emissions," said Lieutenant Governor Kathy Hochul. "While the federal government fails to address the threat of environmental damage, New York is continuing to lead the way with our aggressive clean energy goals and commitment to combat climate change for a cleaner and greener environment for future generations."

In 2017, the federal government proposed a new National Outer Continental Shelf Oil and Gas Leasing Program for 2019-2024, which would open more than 90 percent of the country's offshore waters to oil and gas drilling. For the first time in decades, the new federal plan would open up vast areas of the Atlantic Ocean for possible fossil fuel exploration and drilling, putting New York's coast at direct risk of significant environmental damage.

An exclusion from offshore drilling was granted to Florida shortly after its launch on the grounds that the state relies heavily on tourism as one of the nation's top ocean economies. However, as the number three ocean economy in the nation, New York has not been granted this same exclusion, and stands to lose nearly 320,000 jobs and billions of dollars generated through tourism and fishing industries should the exclusion not be granted. Overall, New York's ocean economy generates $11 billion in wages and contributes $23 billion in gross domestic product. Long Island and the New York Harbor are home to 11.4 million people, with 60 percent of the State's population living along nearly 2,000 miles of tidal coastline.

Additionally, the Port of NYNJ—the largest on the Atlantic seaboard—would be devastated by any major spill related to offshore drilling, disrupting operations and impacting the national economy. The Port supports 400,000 indirect jobs and 229,000 direct jobs while generating $90 billion in combined personal and business income and $8.5 billion in federal, state, and local taxes.

Secretary of State Rossana Rosado said, "New York stands united against the threats oil and gas activity pose and Governor Cuomo has once again shown his commitment to protecting the healthy ocean environment that our coastal communities and economy rely on.  This is a critical battle in our State's continued push to transform our energy future, fight climate change, and protect our state from reckless exploitation."

DEC Commissioner Basil Seggos said, "New York is leading the nation forward in the transition to a clean energy economy. We recognize that oil and gas exploration, drilling, and potential environmental damage associated with offshore drilling would endanger New York's multi-billion dollar coastal economy. Rather than putting the health of our coasts and our waters at risk, directed by Governor Cuomo, New York is responsibly expanding renewable energy to support the state's comprehensive efforts to reduce greenhouse gas emissions and tackle climate change."

Mark Izeman, New York Regional Director & Senior Attorney at the Natural Resources Defense Council said, "While the fate of President Trump's reckless plan to open our waters to offshore drilling hangs in the balance, Governor Cuomo is ensuring that New York's coastal economy is off-limits. By signing this legislation into law, the Governor is making clear that New York will protect its precious coastal waters - along with the hundreds of thousands of jobs that come with it - and safeguard our abundant fish and wildlife. Instead of our ocean waters being polluted by offshore drilling, New York will lead by capturing the winds off our coasts and investing in a clean energy future for all New Yorkers."

Senate Majority Leader Andrea Stewart-Cousins said, "The Senate Majority will not stand by as the Trump Administration plans to drill off Long Island shores. Long Island's natural resources and communities' quality of life are under threat. I applaud bill sponsor Senator Todd Kaminsky for his swift action to protect Long Island and for his leadership on protecting New York State's environment. The Senate Democratic Majority will stand up for Long Island families and fight against any efforts to drill anywhere near New York's coastlines."

Assembly Speaker Carl Heastie said, "New York's coasts and waterways are integral to the health and well-being of our state, environment and economy. We have seen the havoc that oil spills can wreak, and are committed to preventing that kind of devastation here in New York State. I am glad to see this legislation, which was first passed by the Assembly in 2018, signed into law. Thank you to our Environmental Conservation Committee Chair Steve Englebright, who sponsored this bill and made it a reality in here New York. While the federal administration continues to weaken environmental protections and push unsustainable energy policies, the Assembly Majority remains dedicated to protecting our coastlines and waterways."

Senator Todd Kaminsky said, "Keeping Long Island's waters pristine must be a priority for our state even when it is not for the federal government. By signing the prohibition on oil drilling today, Governor Cuomo and our entire state send a strong message that we will not move backward with respect to our energy policy and that we will keep moving forward to protect our natural resources."

Assembly Member Steve Englebright said, "There has been near unanimous condemnation of the federal government's proposal to open up our waters to drilling for oil and gas. This legislation takes aggressive action to protect New York's environment by prohibiting offshore drilling. This law will protect and defend our waters; keeping them safe for recreation, fishing and wildlife. At the same time this action will protect the value of our homes and the natural resources which make Long Island a tourist destination. I wish to thank my Senate Sponsor Todd Kaminsky and commend Governor Cuomo for signing this legislation into law."

Suffolk County Executive Steve Bellone said, "New York is sending a message to Washington that we will not allow oil companies to dictate public policy at the expense of Long Island's beaches.  I thank Governor Cuomo for protecting our shoreline as we embark on a new frontier to make Suffolk County the national leader in renewable clean energy."

Nassau County Executive Laura Curran said, "Expanded offshore drilling would compromise our efforts to keep our waters clean, endanger our ecosystem, and disrupt the industries that Long Islanders depend on for work. I'm grateful for Governor Cuomo's and Senator Kaminsky's leadership in protecting Long Island's precious waters and natural resources."

Suffolk County Legislature Majority Leader Kara Hahn said, "For more than a generation, New York has worked to reverse the environmental impacts resulting from the industrialization of both its shoreline and its waterways. We New Yorkers have fought too hard to protect and restore our coastal waters to ever turn back in favor of a short-sighted policy that threatens all of the work and investment we have made. I thank and applaud Assemblyman Englebright, Senator Kaminsky and Governor Cuomo for reaffirming New York's commitment to our environment and for protecting our shores."

Suffolk County Legislator Rob Calarco said, "Our shoreline goes to the heart of what it means to be a Long Islander. World-class beaches, a vibrant fishing industry, and the health and wellbeing of our people are all tied to our shores. The Federal Government is putting our livelihood and health at risk with its reckless plan to allow oil-drilling just a few short miles off our coast. I am proud to stand with Governor Cuomo and say that we will not stand-by and let Washington put Long Island at risk with this irresponsible plan."

Suffolk County Legislator Bridget Fleming said, "The 2nd Legislative District, which I represent, extends from Brookhaven to Shelter Island to Montauk Point and is home to internationally-recognized stunning beaches, a powerful tourist and second-home economy, and a resurging aquaculture and fishery industry, all critical economic drivers. For the Long Island region, tourism income generates $5.6 billion and supports over 100,000 local jobs. I fully endorse our leaders in Albany, on Long Island and in Suffolk County for leading the efforts in banning offshore drilling and preserving and protecting the ocean beaches that help to define us."

Hempstead Town Supervisor Laura Gillen said, "Long Island's beaches and waterways are legendary and our shoreline is the crown jewel of the South Shore, attracting millions of tourists and visitors every year. Safeguarding these natural assets from offshore drilling not only promotes the exploration of green energy alternatives, but preserves our beachfront communities and protects our local economy, which relies heavily on tourism, fishing and boating."

This bill says no way are you going to drill off the coast of Long Island and New York, because we must lead the way as an alternative to what this federal government is doing.

In March 2019, the U.S. Commerce Department's National Oceanic and Atmospheric Administration asked the public to weigh in on ways to "streamline" a state review process granted under the Coastal Zone Management Act, which is one of the most powerful tools states have to regulate activity off their coasts. At the direction of Governor Cuomo, Department of State filed comments that urge the federal government to abandon any attempt to weaken or undermine state authority needed to protect our vital coastal economy.

While the Secretary of the Interior David Bernhardt recently expressed uncertainty about whether the administration's drilling plan will go forward, New York and other coastal states are maintaining pressure and remaining vigilant in their opposition. Several other state legislatures have taken legislative action to block the proposed expansion of federal oil and gas leasing off their shores. Connecticut, Florida, Georgia, Hawaii, Maine, Massachusetts, New Hampshire, Rhode Island, and South Carolina have introduced bills or resolutions aimed at preventing offshore drilling on their coastal waters. California, Delaware, Maryland, New Jersey, and Oregon have successfully enacted laws. 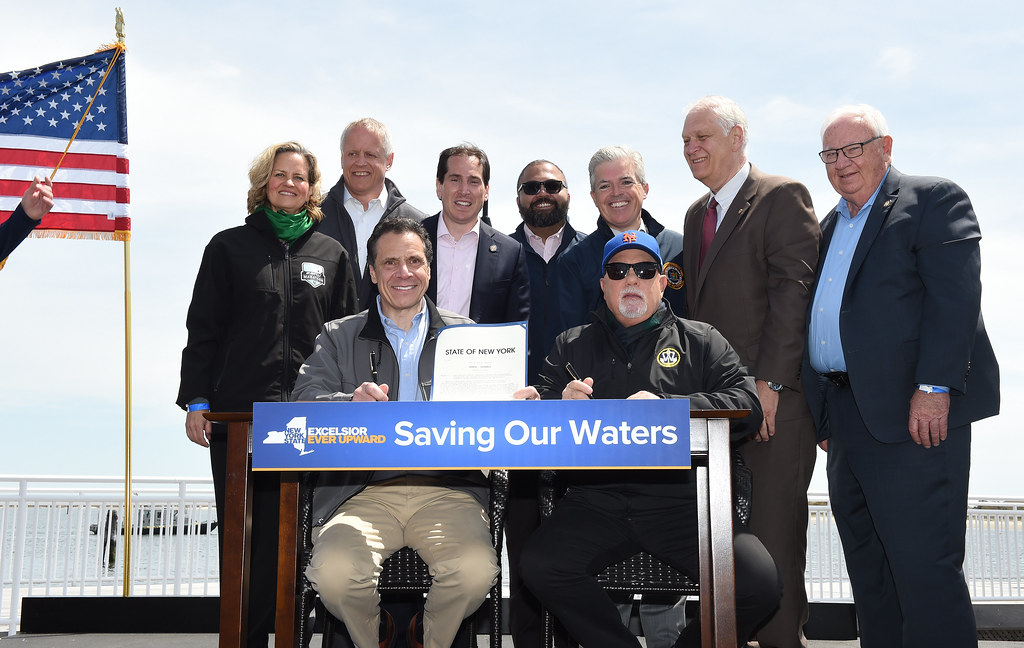