Governor Andrew M. Cuomo today announced the success of the state’s eighth regional sustainability conference, which brought together United States Secretary of Housing and Urban Development Julián Castro, community development experts, local elected officials and business leaders to share successful economic growth strategies in the Capital Region. The conference is part of a statewide effort to boost awareness of resources available to local governments and nonprofit organizations to help create sustainable communities across New York. During the conference, Governor Cuomo highlighted a new handbook that serves as a one-stop-shop resource for State grants – providing context and web links to the complete list of more than 100 innovative funding programs.

“From innovative investments to drive smart growth, to the bottom-up approach of the Regional Economic Development Councils, we are leveraging our assets to build a sustainable economy in the Capital Region and beyond,” Governor Cuomo said. “This conference brought together experts and community leaders to build on our successes, share challenges and strengths, and establish partnerships to create new opportunities and help ensure a brighter future for the entire region.”

United States Secretary of Housing and Urban Development Julián Castro said, "New York has all the ingredients for success: a productive workforce, strong state and local leadership, and a public ready to face new challenges. Today's sustainability conference is a new step toward building neighborhoods of opportunity that promote prosperity for all in the region."

The Sustainable Development & Collaborative Governance Conference draws on then-Secretary of Housing and Urban Development Andrew Cuomo's 1999 conference, "Bridging the Divide: Making Regions Work for Everyone: Shaping the Federal Agenda," which invited experts and academics in regionalism, smart growth and urban revitalization to present their ideas, followed by panel discussions among a diverse group of stakeholders.

Under the leadership of Governor Cuomo, New York State is prioritizing cross-collaboration between state agencies, local governments and community partners to maximize the collective impact of their efforts. The Finger Lakes region is a prime example of this bottom-up approach that has shown its success through the Regional Economic Development Councils.

Lieutenant Governor Kathy Hochul said, "Governor Cuomo has proven how critical sustainable principles and strategic investments are to the growth of a region, and this is exemplified everywhere you look in the Capital Region. Thanks to the Governor's leadership and vision, we continue to invest in creating and protecting jobs, jumpstarting new industries and strengthening both urban and rural communities all across New York State. The progress is undeniable and these conferences are key in building off those successes."

During the conference, Lieutenant Governor Kathy Hochul announced that New York State has secured international certification of nearly $100 million in new "Green Bonds" to drive the development of housing that has a positive impact on the environment and climate. New York is now the first state in the nation to have its affordable housing bonds certified by The Climate Bond Standards Board, on behalf of the Climate Bonds Initiative, an international not-for-profit organization supporting financing for projects around the world that help reduce the impact of climate change.

The Lieutenant Governor also announced that $6.3 million has been awarded to nine projects to help protect 2,764 acres of at-risk farmland in the Capital Region. The projects support the preservation of farmland for agricultural use and protect it from degradation through the use of perpetual conservation easements.

From innovative investments to drive smart growth, to the bottom-up approach of the Regional Economic Development Councils, we are leveraging our assets to build a sustainable economy in the Capital Region and beyond.

Other sustainability and development programs that have been initiated or reformed over the last six years under Governor Cuomo include: 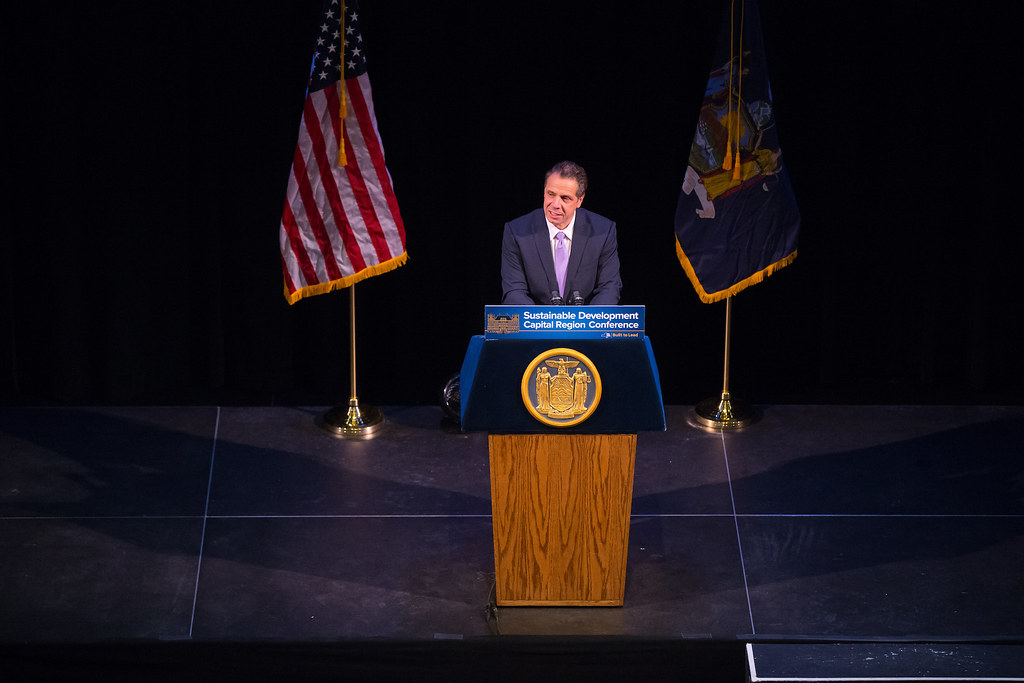 Community Preservation Corporation President/CEO and New York City's former Commissioner of Housing Preservation and Development Rafael E. Cestero said, “At CPC, we believe that housing is critical to transforming underserved neighborhoods into thriving and sustainable communities. Throughout the last several years we have seen the impact of the Governor’s economic development initiatives in attracting new housing, business, and infrastructure to cities large and small across the state. We look forward to continuing our work together to help advance the programs that will be key to expanding and preserving the state’s housing stock, revitalizing our cities, and creating more affordable and sustainable communities for all New Yorkers.”

New York State Canal Corporation Director Brian Stratton said, "Thanks to Governor Cuomo's strategy in Upstate New York, the Capital Region's economy grows every day and we must ensure that progress continues well into the future. This conference offers the local municipal and business leaders an opportunity to come together and develop the forward-thinking approach we need. The Governor's leadership has brought us to where we are today, and by tapping into the expertise of these industry stakeholders, we will continue to bring this area and this state to even greater heights."

Schenectady Mayor Gary McCarthy said, "Success in the 21st century economy requires an approach focused on sustainable development and the ability to capitalize on unique regional assets and that is exactly the strategy that Governor Cuomo has used to jumpstart economic growth throughout upstate New York. Thanks to his leadership, the Capital Region has grown to become a model these policies and by bringing the together the best minds our public and private sectors have to offer, this conference will play a key role in developing solutions that tackle the biggest challenges facing our communities today."