Hospitals Mandated to Expand Capacity by 25%

Governor Andrew M. Cuomo today directed the New York State Department of Health to begin implementing the state's "surge and flex" protocol and mandate all hospitals begin expanding their bed capacity by 25 percent to further prepare hospitals for a future COVID-19 surge. Hospitals had previously been preparing plans for this action as part of New York's Winter COVID Plan. Additionally, the Governor issued a call to all retired doctors and nurses urging them to return to service if they are able to do so. A registration will be renewed at no cost for an individual who completes the questionnaire through the volunteer portal, set up by the state Department of Health.

The Governor also announced that regions that reach critical hospital capacity will be designated as a Red Zone under New York's micro-cluster strategy. Specifically, following the implementation of the state's "surge and flex" program, if a region's 7-day average hospitalization growth rate shows that the region will reach 90 percent within the next three weeks, the region will become a Red Zone.

We're implementing the surge and flex. We're going to add 25 percent additional hospital beds. We'll renew the registration for nurses and doctors to get us a backup staff pool.

"Here in New York, we have followed the data and the science. We do more testing than any state in the United States by far, have more data points by far, and we rely on the data. It's not anecdotal, it's not political, it's not an opinion. Right now, the data is showing us that the highest percent of hospitalization is actually upstate - Finger Lakes, that's Monroe, Rochester area. Buffalo, Western New York, Central New York. You come down to New York City, Long Island, we actually have a lower rate hospitalized than upstate, which is an exact flip of where we were in the spring. In the spring, we had a largely downstate situation and upstate the situation was much better," Governor Cuomo said. "We've done a couple of things that are different than other states. In New York, the state sets all the policies and keeps numbers that are determinative of the policies. Now, we close down if you hit critical hospital capacity. We're implementing the surge and flex. We're going to add 25 percent additional hospital beds. We'll renew the registration for nurses and doctors to get us a backup staff pool, continue to caution on the small spread and at the same time, we are gearing up to have the most efficient, most effective, most fair vaccination program in the country, reaching out to the black community, Latinos, undocumented, to make sure that it's fair. The good news is New York still has one of the lowest positivity rates in the nation. Only Maine, Vermont, Hawaii are lower than we are and Maine, Vermont, Hawaii — beautiful states — but different than New York. They don't have the cities, they don't have the density, so, for us to be down that low, is really good news." 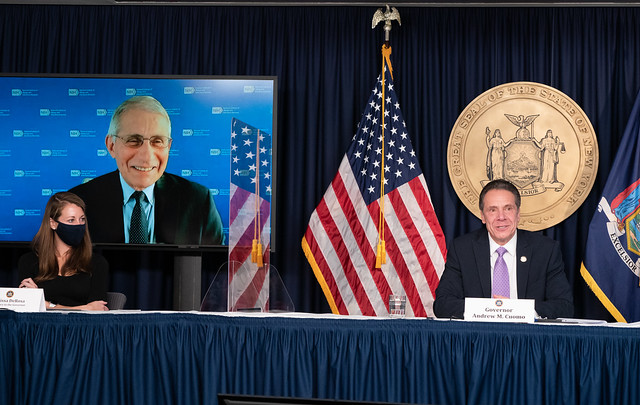 The regional hospital bed capacity and occupancy numbers, including the number of hospitalizations as a percent of the region's population, is as follows:

The regional ICU bed capacity and occupancy numbers are as follows:

Each region's 7-day average percentage of positive test results reported over the last three days is as follows:

Of the 713,129 total individuals who tested positive for the virus, the geographic breakdown is as follows:

Yesterday, 80 New Yorkers died due to COVID-19 in New York State, bringing the total to 27,232. A geographic breakdown is as follows, by county of residence: