Division of Homeland Security and Emergency Services Deploys Thousands of Sandbags and 221 Feet of Aquadam Directly to Niagara County, and is Making Available up to 100 Pumps for the Region to Protect Against Flooding

Governor Andrew M. Cuomo today directed State agencies to bolster efforts to safeguard communities along the shores of Lake Ontario and the St. Lawrence River from potential flooding that could result from the lake's rising water levels. Governor Cuomo instructed the State Department of Environmental Conservation to issue a General Permit to address the potentially damaging effects of high water levels in Lake Ontario and the St. Lawrence River due to the ongoing above average precipitation and snow melt in the Great Lakes Basin. This permit, based on an Emergency Declaration issued by the DEC commissioner, will expedite the process for shoreline property owners to quickly make necessary repairs and stabilize their properties from flood damage. High water levels are projected to continue and may cause widespread shoreline erosion, damage coastline structures and jeopardize infrastructure similar to the historic flooding that took place in the spring of 2017. Additionally, the New York State Division of Homeland Security and Emergency Services has forward deployed 20,000 sandbags, one sandbagger and 221 feet of aquadam directly to Niagara County and is making available up to 100 pumps for the region to help protect against flooding.

"This is a very challenging situation for communities all along the lakes. It's especially problematic here in Newfane and we have a several-pronged strategy that we can execute now before damage occurs to try to reduce and alleviate the problem that we anticipate," Governor Cuomo said. "We are going to issue today a general permit which will basically pre-permit residences and businesses along the water so they can make the kind of short-term and emergency repairs they need to make. Hopefully Mother Nature comes up with a different course and the lake doesn't rise any higher but we're already at record levels and our motto is always hope for the best but prepare for the worst."

"Having visited communities impacted by flooding and seeing the destruction firsthand, I know the devastating impact Lake Ontario flooding has had on homeowners and businesses," said Lieutenant Governor Kathy Hochul. "With additional deployment of resources and increased support, we are preparing for potential flooding and are ready to assist residents and protect communities in a variety of capacities."

The Department of Environmental Conservation issues General Permits, valid for a specified duration of time, following natural disasters or extraordinary weather and when multiple individuals or local governments need to undertake similar types of projects to address damage. General Permits help communities rebuild by avoiding the time-consuming process of seeking individual site-specific permits. For example, in 2017 DEC was able to expedite more than 3,000 permits for emergency work. DEC staff perform rigorous oversight and quality control efforts after the permits are issued to ensure all work being done meets regulations.

Department of Environmental Conservation Commissioner Basil Seggos said, "As communities brace for the impacts of potential flooding, New York State is taking action to reduce and address damage that could occur to property and infrastructure. DEC staff are continuing to monitor the high water conditions and are ready to help municipalities and residents along the shoreline prepare and respond until the emergency has ended."

Acting New York State Homeland Security and Emergency Services Commissioner Patrick A. Murphy said, "With flooding along the shores of Lake Ontario sadly becoming the new normal, it's critical that we as a state come together to support lakefront communities and ensure 2017 does not repeat itself. Under the leadership of Governor Cuomo, New York State's emergency response personnel have been in constant communication with our local partners and have been dispatching additional resources around the clock to the communities that need them. We are here for the long haul and stand ready to assist any other localities that need our help."

We are going to issue today a general permit which will basically pre-permit residences and businesses along the water so they can make the kind of short-term and emergency repairs they need to make.

This new General Permit was issued by DEC to include activities that shoreline property owners might need to take to make necessary emergency repairs and stabilize their properties from high water levels and wind-driven high wave events along the Niagara River, Lake Ontario shoreline and the St. Lawrence River in Cayuga, Jefferson, Monroe, Niagara, Orleans, Oswego, St. Lawrence and Wayne counties. DEC developed the General Permit in consultation with the New York State Department of State (DOS) and the Buffalo District of the U.S. Army Corp of Engineers (USACOE). Activities authorized under this permit qualify for coverage under the USACOE Nationwide Permit Program and have received a Federal Coastal Consistency Concurrence from DOS. Applicants eligible for the General Permit will receive a single approval from all three agencies.

DEC Commissioner Seggos issued an Emergency Declaration for Cayuga, Jefferson, Monroe, Niagara, Orleans, Oswego, Saint Lawrence and Wayne counties, providing for the issuance of a new General Permit for typical activities needed to be undertaken by shoreline property owners to repair and stabilize properties damaged by current high water levels in Lake Ontario and the St. Lawrence River due to above average precipitation and snow melt in the Great Lakes Basin along the Lake Ontario, Lower Niagara River and St. Lawrence River shorelines.

The issuance of the General Permit is just one of several actions taken by the state under the direction of Governor Andrew M. Cuomo to deploy additional resources and help protect communities from the region's rising water levels. Over the weekend, the Governor announced that the Division of Homeland Security and Emergency Services had begun coordinating regular preparedness calls with local partners, and was staging critical response and recovery assets along the lake's shores to mitigate potential impacts of flooding before it occurs. At the Governor's direction, the Division has deployed a total of 340,000 sandbags, multiple sandbaggers, multiple pumps and hundreds of feet of aquadam to strategic sites within the eight counties that border Lake Ontario. The Division remains in constant communication with local partners and additional sandbags and sandbaggers, and stands ready to provide additional assistance as needed. 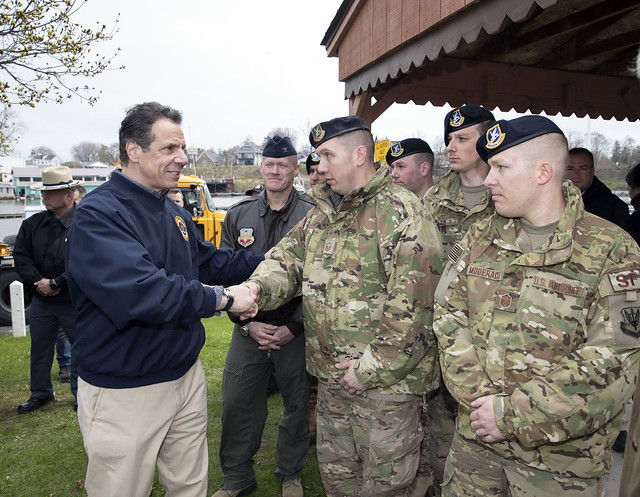 DEC experts continue to monitor data and reports from the International Joint Commission (IJC) on water level projections to identify potential areas that could be impacted by rising levels. Following severe flooding in Canada, the IJC continues to reduce outflows of water from the Moses-Saunders Dam on the St. Lawrence River in order to minimize impacts, as the lake's water level is currently more than one foot above average.