Governor Andrew M. Cuomo today announced that the New York State Department of Environmental Conservation is filing a lawsuit against the International Joint Commission for its mismanagement of Lake Ontario water levels that caused catastrophic damage to shoreline communities. As a direct result of the IJC's mismanagement, extremely high water levels exacerbated damage to residences and businesses, swept away large swaths of the shoreline, and upended the lives of thousands of New Yorkers twice in the past three years. Property owners have suffered severe erosion and loss of vegetation, while the State sustained more than $4 million in property damage that it still has not been able to fully repair. The lawsuit argues that the IJC must compensate the State for the destruction resulting from water level mismanagement.

"The facts of the matter are plain: The IJC's function is to manage the Lake Ontario water levels, and they failed - period. They have been wholly unresponsive and have taken no action to make the situation better," Governor Cuomo said. "We will not shoulder the burden of the destruction that is a direct result of the IJC's gross mismanagement of Lake Ontario water levels, and the IJC needs to compensate New York for the severe damage to the homes and businesses along the shoreline. That's what this lawsuit is all about."

Specifically, the complaint asserts the following causes of action:

In an attempt to mitigate exposure to property owners, the State repeatedly called on the IJC to release as much water from the Moses Saunders Dam as possible. Rather than protect shoreline communities, the IJC has favored commercial shipping interests. In a June 8 letter to the U.S. and Canadian Chairpersons of the IJC, the Governor, on behalf of the State of New York, called on the commission to take immediate action to correct its water management protocols to remedy the ongoing threat to the citizens and businesses caused by Lake Ontario flooding. The Governor demanded that the IJC reimburse New York for its costs, and make additional funds available for resiliency projects and other protective measures made necessary by the IJC's acts and omissions. The IJC has failed to address any of these demands. Instead, the IJC has recently reduced the outflows slightly notwithstanding continued record-high water levels. As laid out in the DEC's complaint, the IJC can no longer hide behind a claim of sovereign immunity and must now answer for its negligent conduct and failure to adhere to obligatory requirements to address high water levels.  The IJC's failure to take action compels this legal action.

The IJC's function is to manage the Lake Ontario water levels, and they failed - period.

Department of Environmental Conservation Commissioner Basil Seggos said, "Time and time again, Governor Cuomo has called on the IJC to put the safety and integrity of New York's shoreline communities ahead of shipping interests. And repeatedly, the IJC failed to act. New York State is making significant investments to improve the resiliency of homes and businesses along Lake Ontario. We are now demanding that the IJC do the responsible thing, and take action to safeguard our communities from high water."

In 2017, New York State responded quickly to the crisis and took immediate action to protect communities by delivering critical state resources to help communities and businesses rebuild. The State committed $117 million to rebuild communities along the Lake Ontario shoreline that were devastated by high water levels in 2017, only to once again this year experience record-high water levels in these same communities. Following these events, the IJC should have recognized the significant potential of future devastation from rising waters and taken action to lessen the extent of damage caused by flood waters.

Representative Joe Morelle said, "As our neighbors on the waterfront continue to experience devastating flooding year after year, we can no longer afford to wait and react—we must take action now to mitigate future damage and protect homeowners and businesses alike. Thankfully, we have a Governor who recognizes that and is taking action to strengthen the resiliency of lakeside communities like ours. I'm grateful to Governor Cuomo for his partnership and dedication to supporting the needs of our community."

Senator Rich Funke said, "The IJC has failed to protect homeowners in the Finger Lakes from devastating flooding by standing by the deeply flawed plan 2014. I've called for legal action against the IJC previously and I commend Governor Cuomo for taking action to finally hold them accountable. The status quo is unacceptable and the time for action is now."

Senator Pamela Helming said, "Today we sent a loud and clear message to the IJC.  Enough is enough! They have failed the hardworking taxpayers who own homes and businesses along the shoreline and they have failed New York. The state has stepped up to help our local communities, at taxpayer expense, to fix a problem the IJC created. This is nothing short of a man-made disaster and the IJC needs to abolish Plan 2014 and compensate those whose properties have been damaged or destroyed. This is not a Democrat or Republican issue, it's a matter of fairness and public safety. I am proud to stand with local residents, my legislative colleagues and Governor Cuomo to end this disastrous plan."

Senator Patty Ritchie said, "In 2017 and again this year, I have heard from countless people living along Lake Ontario and the St. Lawrence River whose homes were severely damaged and in some heartbreaking cases, completely destroyed due to flooding. There have been two major flooding situations since the implementation of Plan 2014 just three years ago—yet the International Joint Commission has taken little action to see what can be done to alter the plan and provide necessary relief for property owners. I thank the Governor for continuing to advocate for those who live along our shorelines and for taking this necessary action."

Senator Joseph Robach said, "I am pleased to see any action that could make the IJC return Lake Ontario water levels to the Plan 1958DD, which was more conducive for people living along the south shore, in my district and across all of Lake Ontario. This is the right move not only for lake riparian, but also for all taxpayers and can save and prevent hundreds of millions of dollars in future costs and damages. I hope this legal action will move us to a better place for everyone involve."

Assembly Member Will Barclay said, "Plan 2014 has had such a devastating impact on property owners along Lake Ontario. I support all efforts to repeal the plan and I appreciate the Governor bringing the lawsuit on behalf of everyone whose homes and businesses have been so deeply affected by this disaster."

Assembly Member Mark Johns said, "Today we are sending a clear message that this unnecessary and costly damage is no longer acceptable." 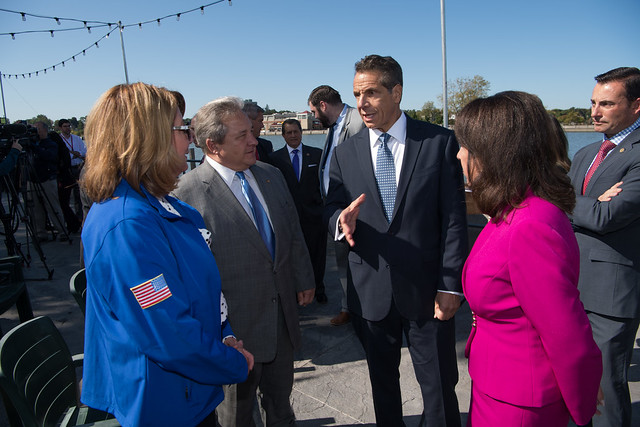 Assembly Member Peter Lawrence said, "Today's announcement emphasizes what my government colleagues and constituents have been claiming since day one, that the recent lake level problems fall squarely at the feet of the IJC and Plan 2014. This plan was supported by the IJC, with the knowledge that flooding would increase, yet there was no consideration given to property owners, who inevitably have suffered financial losses for two out of three years since the plan's implementation. I appreciate the efforts of Governor Cuomo, who fittingly calls out the IJC's mismanagement, and I hope that today's action prompts the IJC to suspend Plan 2014. If nothing is done to address the lake level, these issues will continue in a vicious cycle."

Assembly Member Bill Magnarelli said, "Our New York State communities along the Lake Ontario shoreline have been devastated by high water levels. These events have done damage to homes and businesses.  It is time that the IJC remedy this situation.  I applaud the Governor for taking action on this matter."

Assembly Member Brian Manktelow said, "I am very happy that we are continuing to put the pressure on the IJC. Meeting the past several days with owners again along the lakeshore just reinforced to me how important it is to do all that we can. I stand with the Governor on this. Our citizens deserve nothing less."

Assembly Member Angelo J. Morinello said, "Thank you, Governor Cuomo, for your continued attention to the devastation the Niagara River and Lake Ontario shorelines have experienced as a direct result of the failed policy of the IJC. They were supposed to have the money to assist remediation and protection of our shoreline. The Governor's actions will hold the IJC accountable."

Assembly Member Michael Norris said, "Taxpayers and businesses along the southern shore of Lake Ontario have suffered significant damages and this legal recourse is necessary to obtain justice for them moving forward. I commend Governor Cuomo for initiating this action."

Assembly Member Mark Walczyk, "The Governor has shown steadfast leadership on this critical matter and I applaud him on filing this lawsuit. The IJC has to step up to the plate and help foot the bill for the damage their poorly crafted plan has caused."

Greece Town Supervisor Bill Reilich said, "Lake Ontario is too economically and environmentally vital to our communities to ignore this devastating flooding and lack of accountability. Thanks to Governor Cuomo's support, we will fight every day to make the case for change and ensure we are protected from rising water levels in 2020 and for decades to come."

This year, and to prepare for anticipated, future high water levels on the lake, Governor Cuomo established the Lake Ontario Resiliency and Economic Development Initiative, or REDI Commission and committed up to $300 million to support its efforts. The multi-agency REDI Commission is charged with developing a plan to increase the resiliency of infrastructure along Lake Ontario's waterfront while strengthening the region's local economies, which are heavily dependent on summer tourism. The commission is currently examining areas susceptible to damage caused by the rising waters, including those hit hard in 2017, in order to develop a package of new state actions ranging from legislative changes to aid packages to executive actions that will not just rebuild the shoreline, but improve resiliency to withstand unforeseen weather events. The state anticipates it will have spent $45 million in response and damage costs for 2019, and as part of REDI's comprehensive examination of projects to promote resiliency and economic development in the affected region.

In addition to delivering millions in funding to help restore residents and businesses affected by the rising water-levels on Lake Ontario, New York State has deployed more than 1.5 million sandbags, hundreds of pumps, and eleven thousand feet of temporary dams in eight counties along Lake Ontario in preparation for damage caused by high water levels.  New York State will continue to take aggressive action to ensure residents and businesses are protected from these high-water levels, but the state should not have to bear the costs without any action from the IJC.