State Continues to Take Action to Prevent Zika, Deploying More Than 16,000 Larvicide Tablets and Testing More Than 110,000 Mosquitos Since March

Governor Andrew M. Cuomo today announced a series of new aggressive initiatives to combat the Zika virus in New York State. At the Governor’s direction, the state Department of Health, in partnership with the MTA, is deploying larvicide tablets to standing water within the subway system to decrease the prevalence of potential breeding grounds for the albopictus mosquito. In addition, the Department of Health will coordinate with all state agencies, including the State Office of Parks, Recreation and Historic Preservation and the Department of Environmental Conservation, to ensure all measures possible are being taken to proactively address the situation. The state is also redoubling its efforts to protect New Yorkers from the virus – ramping up distribution of larvicide tablets to homeowners and providing more Zika protection kits to pregnant women at health and family planning centers and WIC programs across the state.

The new initiatives build on the Governor’s previously announced comprehensive six-step plan to combat the Zika virus, including the launch of a statewide public awareness campaign, establishing a new rapid response team and requiring that county health departments submit Zika action plans to the state. New York City and the 57 other counties in New York have all received approval from the Department of Health on local Zika action plans. Additionally, more than 267 traps are monitored throughout New York State and 110,000 mosquitoes have been tested this year – all showing negative results for the virus.

“The Zika virus remains a dangerous public health threat, and New York State continues to pursue every possible measure to combat it,” Governor Cuomo said. “By enlisting the cooperation of state agencies and New Yorkers, we are taking aggressive action to help reduce the prevalence of mosquito breeding grounds across the state and stop this disease at its source. As the Zika situation continues to evolve, we will remain vigilant and strengthen our prevention efforts to safeguard the public health and safety of all New Yorkers.”

As mosquitoes lay eggs in or near water, and their offspring “grow up” in water before emerging as adults that fly and bite, stagnant water serves as potential breeding ground for mosquitoes capable of transmitting the Zika virus. The state is taking aggressive action to apply larvicide tablets to standing water and reduce the risk of potential transmission of the virus.

As part of the new effort, the state Department of Health, in partnership with the MTA, will target 36 priority locations to eliminate sources of standing water. The primary focus will be to increase drainage within the stations, while also deploying larvicide tablets as needed. Working with the MTA, the Department of Health will also put place new traps to monitor the mosquito population and ensure rigorous testing and reporting of the presence of the albopictus mosquito across the system. Additionally, the State Office of Parks, Recreation and Historic Preservation will continue to coordinate with both the Department of Health and Department of Environmental Conservation to aggressively identify and eliminate potential mosquito breeding grounds in parks and recreational areas across the state.

By enlisting the cooperation of state agencies and New Yorkers, we are taking aggressive action to help reduce the prevalence of mosquito breeding grounds across the state and stop this disease at its source.

The greatest danger facing those who contract Zika is a birth defect known as microcephaly. To date, one infant has been born with microcephaly in New York. This disease occurs in babies of mothers who are infected with the Zika virus while pregnant. Zika may also cause a rare disorder called Guillain Barré Syndrome, which can cause temporary paralysis. The World Health Organization declared Zika a public health emergency of international concern in February. The CDC issued travel advisory on Monday reminding pregnant women to avoid travel to areas with active Zika virus transmission. This now includes the Wynwood section of Miami, Florida, where the number of confirmed cases of local Zika transmission recently rose to 14. There have been no cases of local transmission in New York. To date, there have been 537 confirmed cases of Zika statewide – 532 of which were travel-related and five of which were sexually transmitted. Out of the 537 confirmed cases, 414 have been found in New York City.

“With six million daily subway customers, the MTA takes public health concerns just as seriously as our operational safety,” Tom Prendergast, MTA Chairman and CEO said. “Some 13 million gallons of water enters the subway system every day, from precipitation, intrusion of ground water and even the water we use to power clean platforms. But the serious threat of virus carrying mosquitos makes it even more important to we have clean, functioning drains, and adequate pump equipment, aggressive inspection and pumping schedules to remove standing water. At Governor Cuomo’s direction, we are stepping up our efforts to clear standing water which could breed virus-carrying mosquitos, and to treat areas that might allow breeding so that our passengers can travel the subway system confident that we taking all necessary preventive steps to protect them.”

"We all play a role in preventing the Zika virus,” said New York State Health Commissioner Dr. Howard Zucker. “This latest initiative to proactively address standing water in mass transit locations throughout the city is another example of Governor Cuomo’s Zika prevention plan in action. The State’s aggressive approach, combined with residents’ vigilance in removing standing water from their own properties and protecting themselves from mosquito bites if they travel to places with active Zika transmission, will help us protect New Yorkers, especially pregnant women, from Zika." 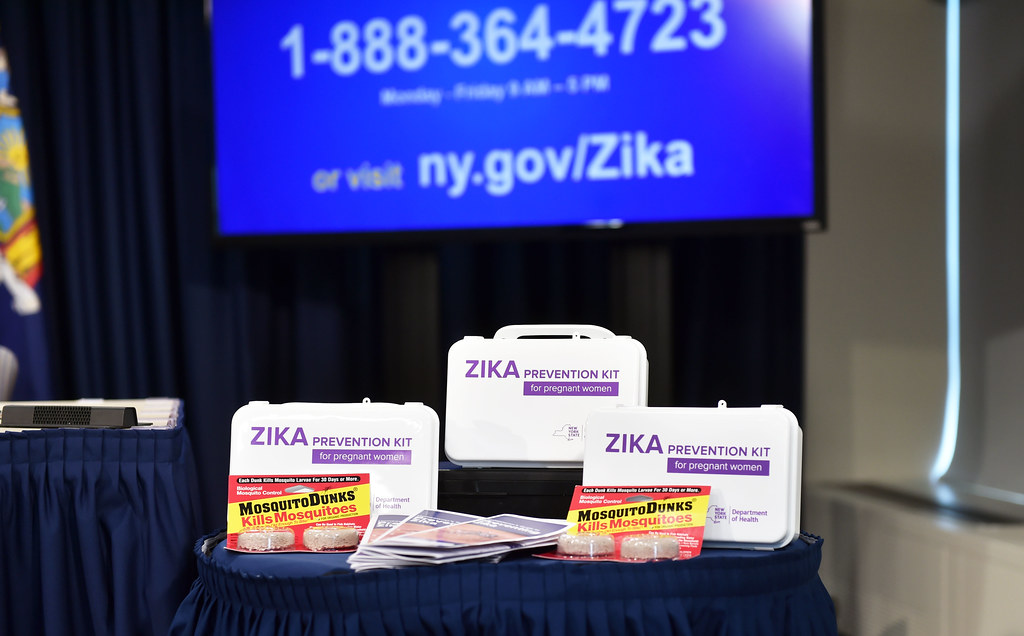 1. Eliminate Zika at its Source. To eliminate mosquito breeding sites, the state has 100,000 larvicide tablets ready for distribution across the state. More than 16,000 tablets have already been distributed to municipalities and residents. Residents can request a free two-pack of larvicide by calling 1-888-364-4723. One larvicide tablet lasts one month.

2. Aggressively Monitor the Aedes Mosquito with Special Trapping and Testing. The state is also monitoring the mosquito population by deploying special mosquito traps to collect and test mosquitoes across the region to identify and respond to potential Zika transmission. The state has deployed 250 traps in New York City, across Long Island and the lower Hudson valley since March.

4. Deploy Rapid Response Teams Wherever Local Transmission is Confirmed. The state will deploy rapid response teams wherever a case of Zika transmission by an Aedes mosquito is confirmed. To date, there have been no cases of confirmed transmission by an Aedes mosquito. The rapid response team will be composed of officials from the State Department of Health and the Department of Homeland Security and Emergency Services Office of Emergency Management to inspect surrounding areas, perform additional treatment and develop a local action plan.

6. Launch Statewide Public Awareness Campaign. The state has launched an aggressive public awareness campaign targeting New Yorkers across the state, as well as international travelers from Zika-affected areas. TV and radio PSAs began running throughout the downstate area beginning May 8 and will to run throughout mosquito season. In addition, digital media has launched with banner ads on websites frequently visited by people traveling to affected regions, as well as bus, subway and billboard ads. The campaign also includes a Zika Information Helpline (1-888-364-4723), multi-lingual posters, brochures, fact sheets and a website dedicated to the Zika Virus.