Out of an Abundance of Caution, 4 Homes Evacuated Amid Flooding

Governor Andrew M. Cuomo today deployed state resources to assist local communities impacted by flooding in Whitesboro due to ice jamming at the CSX-owned rail bridge. As a result of today's flooding, local authorities evacuated four homes out of an abundance of caution. New York has dispatched Swift Water Rescue personnel and equipment to assist localities in the Mohawk Valley and Southern Tier regions. In addition, Governor Cuomo urged New Yorkers in the Mohawk Valley and Southern Tier regions to take necessary precautions in anticipation of potential ice jam flooding on rivers and streams. The State will also be adding 5 large culverts under the CSX Bridge to mitigate the impact of flooding and building additional flood plain benches in the immediate vicinity.

"New York is taking action to assist communities impacted by destructive ice jam flooding and ensure the safety of our communities," Governor Cuomo said. "In New York we know Mother Nature's wrath all too well, and we are more prepared than ever to confront extreme weather and help residents recover as quickly as possible. When things are at their worst, New Yorkers are at their best, and we will do everything we can to support communities impacted by flooding."

The Governor has deployed the following agency resources to assist in Whitesboro:

As temperatures increase, the threat for ice jam movement and possible ice jam flooding remains near clogging points by bridges, river bends, locks, and other potential obstruction areas along these rivers and streams.

In addition to the above mentioned resources, state agencies are prepared to assist across the state with any ice jam flooding issues.

"New York is taking action to assist communities impacted by destructive ice jam flooding and ensure the safety of our communities."

The state's ten regional stockpiles are prepared to deploy key resources to assist with any flooding issues. Currently, stockpiles are equipped with:

The Department of Transportation is closely monitoring all potential ice jam and flood locations. The Department continues to clear culverts to ensure flood conditions do not arise and potential blockages are cleared quickly.  At Sauquoit Creek in the Mohawk Valley, the Department has moved an excavator and other flood mitigation equipment to the area and is also transporting a long reach excavator from the Southern Tier to the Mohawk Valley.

Thruway Authority staff are actively inspecting drainage systems are monitoring for potential flooding. Staff are prepared to respond to any flooding issues statewide with more than 664 operators and supervisors, small to medium sized excavators, plow/dump trucks, large loaders, and a number of portable VMS boards, portable light towers, smaller generators, smaller pumps and equipment hauling trailers, as well as signage and other traffic control devices available for any detours or closures.

The Canal Corporation continues to communicate with hydropower entities along the state Canal System regarding changes in releases and conditions as well as developing hazards. The Canal Corporation has taken pre-emptive actions statewide to mitigate potential flood impacts throughout the system and staff are closely monitoring known ice jam locations including known locations along the Mohawk River.

The Canal Corporation has a contractor on standby to send to Erie Canal Locks 8-10 in Schenectady and Montgomery counties to remove accumulated ice jams adjacent to the locks if they were to occur.

State Troopers are assisting with the ongoing flooding situation in Whitesboro, Oneida County, and are also monitoring along rivers and streams that are prone to ice jams and flooding in other affected areas. Troopers are ready to be deployed in case flooding occurs. All four-wheel drive vehicles are in service, and snowmobiles, Utility Task Vehicles and boats are ready for deployment as needed. 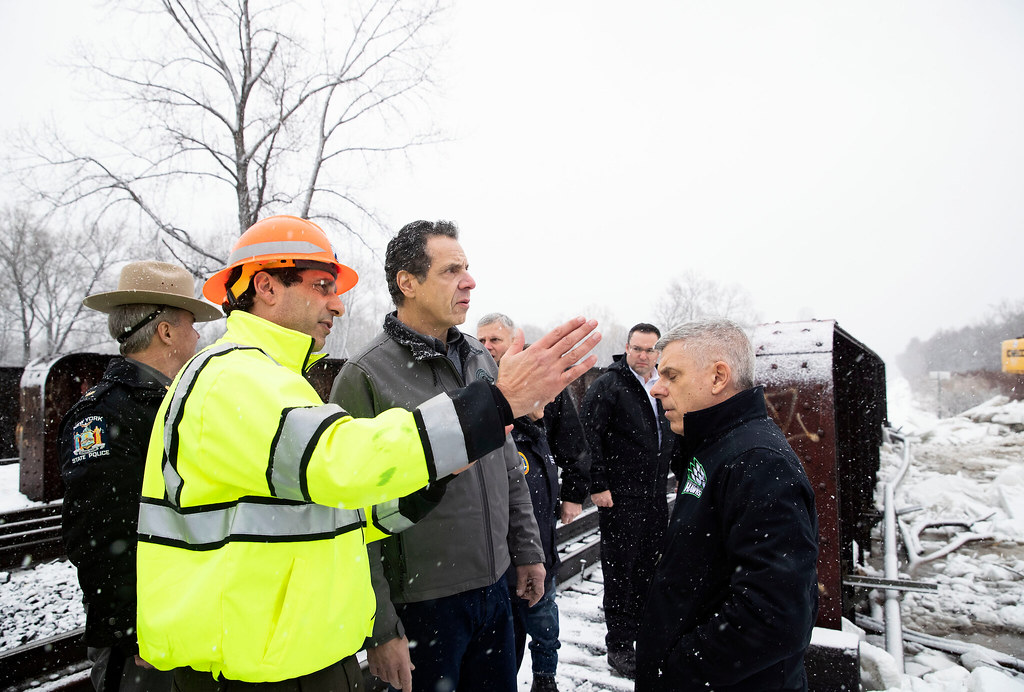 Below are flood preparation safety tips: