Division of Homeland Security and Emergency Services Deploys More than 100,000 Sandbags and Two Sandbaggers Directly to Oswego County to Protect Against Flooding

State Will Have Deployed Nearly 800,000 Sandbags, 15 Sandbaggers, Hundreds of Pumps and 920 Feet of Aquadam in the Eight Impacted Counties By Sunday Afternoon

Governor Andrew M. Cuomo today announced the deployment of additional resources to Oswego County in anticipation of potential Lake Ontario flooding. In total, more than 100,000 sandbags, two sandbaggers and 250 feet ofaquadam have been dispatched to locations throughout the County, as well as a long arm excavator with an operator to assist with aquadam deployment. The Governor also encouraged local officials in the eight counties potentially impacted by Lake Ontario flooding to work with their County Emergency Managers to submit any resource needs directly into NY Responds, the state's web-based system that enables both local governments and state agencies to submit and share vital emergency-related information and resource requests. Emergency Managers may also submit requests through the New York State Watch Center at 518-292-2200 if they are unable to access NY Responds at the time.

"As we get ready for this possible emergency, we are hoping for the best and preparing for the worst. We have deployed nearly one million sandbags and nearly 1,000 feet of aquadam to the impacted counties. But I would ask all local governments who may be in the path of flooding to let us know before the fact if they can use help - because once the flood happens, it's too late," Governor Cuomo said. "We also need to accept the new reality that these high water levels are going to continue and build back higher and stronger than before. Part of the federal government's $2 trillion infrastructure program should definitely be used for rebuilding this shoreline. And we need representation on the IJC - they need to get their act together and do a better job so we are not always in this situation."

Property owners along the shoreline in need of sandbags, aquadam or other resources should contact their municipality or county emergency management office directly for assistance. In addition to its ongoing preparedness operations along the shoreline, the state will continue to coordinate directly with counties and local partners to ensure their supply stocks for residents and business owners are continuously replenished. The Division of Homeland Security and Emergency Services remains in constant communication with local partners and stands ready to deploy additional sandbags, sandbaggers, pumps and aquadam to any localities in need.

To date, the Division of Homeland Security and Emergency Services has deployed more than 800,000 sandbags 15 sandbaggers, hundreds of pumps and 920 feet of aquadam throughout the eight counties lining the shores of the lake. New York State Canal Corporation is sending a long arm excavator with an operator to Oswego County to assist with aquadam deployment. As of today, 100 members of the New York National Guard have been activated to support preparedness operations.

Following a meeting with State officials earlier this week the International Joint Commission increased outflows of water from the Robert Moses-Robert H. Saunders Power Dam on the St. Lawrence River in order to minimize impacts, however the lake's water level remains more than one foot above average and could continue to rise.

As we get ready for this possible emergency, we are hoping for the best and preparing for the worst. 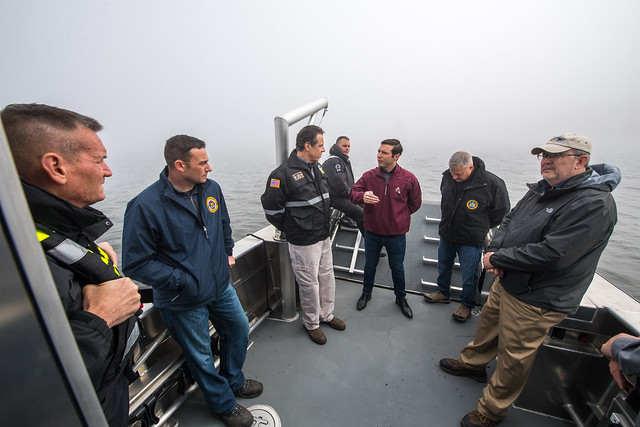 Additionally, the State Department of Transportation (DOT) is overseeing sandbag filling operations in the eight counties bordering Lake Ontario, in cooperation with the Department of Corrections and Community Supervision which has provided work crews made up of between 5-12 eligible incarcerated individuals, who have filled almost 113,000 sand bags and worked on an aquadam deployments. DOCCS will continue to make additional crews available as the situation evolves.

DOT's incident command system has been activated for this weather event and maintenance staff are deploying DHSES equipment such as water pumps and aqua dams to strategic locations bordering the Lake in anticipation of flooding.  Crews are also readying response equipment, inspecting drainage structures in low lying areas, and inspecting culverts for debris. The New York State Power Authority and Canal Corporation have also provided assistance in transporting resources to affected communities.