Governor Andrew M. Cuomo today announced the deployment of 26 bilingual mental health professionals and 25 state building inspectors to Puerto Rico to assist in the recovery efforts as the island continues to recoup from a string of devastating earthquakes. Lieutenant Governor Kathy Hochul will lead a delegation to Puerto Rico today along with the deployments and visit the towns of Peñuelas, Guayanilla and Yauco to tour earthquake affected areas. The deployments follow a series of initial damage assessments conducted by the Governor and his delegation during their trip to Puerto Rico on January 14 and 15.

"While the federal administration has turned its back on Puerto Rico, New York is continuing to step up to extend a helping hand," Governor Cuomo said. "The people of Puerto Rico are suffering and they still need our help. This deployment of mental health professionals and experts on the structural assessment team will help ensure the safety of our brothers and sisters in Puerto Rico and help them cope as they rebuild and restore their lives."

"We are committed to continuing our efforts to support Puerto Rico and assist in recovery and rebuilding," said Lieutenant Governor Kathy Hochul. "I'll be joining Secretary of State Rossana Rosado in leading a state delegation of mental health professionals and building inspectors to assess damage from earthquakes and provide individuals and families with the care and services they need following the devastation. While the federal government turns its back on our brothers and sisters, we remain steadfast in helping to ensure the health and safety of those in Puerto Rico and build back better and stronger."

The Greater New York Hospital Association will also work with New York-Presbyterian Hospital to develop a comprehensive, long-term mental health and telemedicine program for Puerto Rico's residents. The State and GNYHA will partner with the Center for Body-Mind Medicine to deploy up to 15 mental health professional to Puerto Rico, to help address the long-term impact of these traumatic events, especially in children.

The New York contingent of building inspectors consists of 19 experts from the State Office of Fire Prevention and Control, as well as six from the Department of State, who are trained to assess buildings and facilities that have suffered damage from disasters and emergencies.

As part of this deployment, the building inspection team will be tasked with inspecting a portion of the Island's 35,000 damaged buildings. Once in Puerto Rico, inspectors will be dispatched to locations in need of inspections and report findings back to Puerto Rico Planning and Housing Authority Officials. During each inspection, the New York team members will look for things that may impact the structural integrity of buildings such as leaning walls, compromised supports, severe stress cracks, and other criteria that would limit the use of a building until it can be rendered safe for occupancy.

The team will depart for Puerto Rico on February 3rd. Their mission is expected to last for 14 days.

This deployment of mental health professionals and experts on the structural assessment team will help ensure the safety of our brothers and sisters in Puerto Rico and help them cope as they rebuild and restore their lives.

Greater New York Hospital Association President Kenneth E. Raske said, "New York's hospital community stands in solidarity with Puerto Rico and is honored to help deploy bilingual mental health professionals to the Island in the wake of these terrible earthquakes. GNYHA thanks Governor Cuomo for once again taking the lead in bringing much-needed aid to the people of Puerto Rico, and is proud to once again work with him on these efforts."

New York State Secretary of State Rossana Rosado said, "New York continues to stand with Puerto Rico, and I am proud to be part of the team that is helping our neighbors rebuild and recover from the destructive earthquakes. I am grateful for Governor Cuomo's unwavering support and for our tremendous workforce for their willingness to use their expertise to assist the people of Puerto Rico."

New York State Homeland Security and Emergency Services Commissioner Patrick A. Murphy said, "Puerto Rico has gone through so much over the past several years and we are proud to help in any way we can as earthquakes continue to ravage the island. Whether it's this team of building inspectors, or a future need that has yet to be identified, New York stands ready to assist our Puerto Rican brothers and sisters in rebuilding and recovering as quickly as possible."

Office of Mental Health Commissioner Dr. Ann Sullivan said, "Natural disasters cause great stress and confusion for families and individuals and can lead to or exacerbate depression, anxiety and post-traumatic stress disorder. The people of Puerto Rico have experienced so much devastation in recent months and will benefit greatly from the expertise of the bilingual mental health professionals arriving on the island Monday. Governor Cuomo has once again demonstrated a strong commitment to assisting and supporting our most vulnerable citizens." 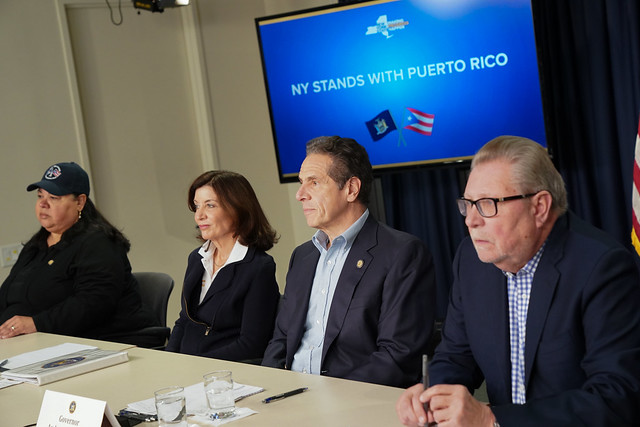 Since this series of devastating earthquakes began several weeks ago, New York has stood shoulder to shoulder with Puerto Rico and has worked to support the Island's recovery any way it can. Not only has the Governor personally traveled to the island to survey damage and promote solidarity, but he has deployed engineers and utility experts from the New York Power Authority to address power outages caused by the earthquakes and work to stabilize the island's power system to help mitigate the repeated power outages. The state has also provided hundreds of blankets, pillows and emergency kits to those affected and joined with the Greater New York Hospital Association to authorize the deployment of bilingual mental health professionals to support people on the island who are suffering from the trauma of the disaster.

Prior to the earthquakes, Governor Cuomo has continuously directed critical resources to communities in need following Hurricane Maria's landfall in September 2017. In the immediate aftermath, New York established the Empire State Relief and Recovery Effort, ultimately distributing at least 4,400 pallets of supplies collected from 13 donation sites across the state. New York State also deployed more than 1,000 personnel, including hundreds of utility workers and power experts, to help with power restoration and grid stabilization.

Under the Governor's leadership, New York State has dedicated approximately $13 million to support the more than 11,000 displaced Hurricane Maria victims living in New York. Part of this funding is being directed to organizations who connect vulnerable Puerto Ricans to needed services such as employment, housing, benefits counseling and health care. Governor Cuomo has also committed up to $11 million dollars in housing and workforce funding for displaced Puerto Ricans: a $1 million program to provide robust case management services to displaced Puerto Ricans, and up to $10 million in job training and placement.

NYPA is presently offering continued consultation on a wide-range of issues relating to the rebuilding of Puerto Rico's grid, focusing specifically on these areas: technical assistance and advocacy, reforming management and operations, and strengthening emergency preparedness. Between the months of November 2017 and April 2018, more than 450 New York State utility personnel, led by NYPA, went to Puerto Rico to help restore power. The New York State utility crews, under NYPA's leadership, consisted primarily of transmission and distribution experts, damage assessors and general support staff, who undertook repairs to transmission lines and other electric infrastructure work focusing its initial power restoration efforts in San Juan. They brought with them hundreds of bucket trucks, diggers, excavators and other specialized equipment to complete the necessary repairs to damaged transmission and distribution lines and worked 16-hour days, seven days-a-week to help restore power. The NYS utility workers then joined with utility workers from around the country—led by the Edison Electric Institute, the American Public Power Association and the National Rural Electric Cooperative Association—to help restore power to other areas of the island

Governor Cuomo and the New York Congressional Delegation continue to advocate for Puerto Rico to receive essential federal assistance. In 2017, Governor Cuomo along with members of the New York Congressional Delegation and with Puerto Rican elected officials issued a Build Back Better Assessment Report. The report identified specific sectors needing investments, including housing, power grid and resiliency, and agriculture, among others.

After the 2018 summer, Governor Cuomo announced the successful completion of the summer-long NY Stands with Puerto Rico Recovery and Rebuilding Initiative. Throughout the summer, more than 650 SUNY and CUNY students, as well as skilled labor volunteers, traveled to island communities still recovering from Hurricanes Maria and Irma to provide assistance to those in need. Over the course of five deployments, volunteers logged in nearly 41,000 hours cleaning, restoring, and rebuilding homes. The goal to renovate 150 homes was far exceeded, with a total of 178 homes restored over 10 weeks.

Under the direction of Governor Cuomo, SUNY's and CUNY's respective Board of Trustees passed resolutions in the fall of 2017 authorizing campuses to provide students from Puerto Rico and the U.S. Virgin Islands impacted by hurricanes Maria and Irma with the ability to pay tuition at the in-state rate for the 2017-2018 academic year. Both systems renewed the granting of in-state tuition for the 2018-2019 academic year.