20 Sandbaggers, Over One Million Sandbags, Hundreds of Pumps, and Over 5,000 Feet of Aquadam Currently Deployed to Affected Counties

Governor Cuomo today declared a State of Emergency for the eight counties impacted by potential Lake Ontario flooding: Cayuga, Jefferson, Monroe, Niagara, Orleans, Oswego, St. Lawrence and Wayne. The Governor's order directs state agencies to protect State property and to assist local governments and individuals in responding to and recovering from the flooding.

The Governor also directed the Commissioner of the New York State Office of Parks, Recreation and Historic Preservation to implement a 5 mile per hour speed limit, where the Commissioner finds it appropriate, to control wakes along the Lake Ontario shoreline in the affected counties as part of the state's ongoing response to coastal flooding in the region. Beginning today, vessels operating within 1,000 feet of shore, unless otherwise directed by a County Declaration, must observe a 5 mile per hour speed limit to reduce impacts to shoreline residences and infrastructure caused by wave action and to promote safe boating. The no wake zone does not apply to communities along the St. Lawrence River.

"We are preparing now for the reoccurrence of the 2017 flooding situation, which as people remember was devastating and caused a lot of damage and a lot of hardship for thousands of New Yorkers. We're talking about the entire shoreline of Lake Ontario, so it's hundreds of miles of New York State property," Governor Cuomo said. "The only course of action is to do everything we can to be prepared before the flooding actually happens - and that's what we're doing. I'm also declaring an emergency order for the affected communities that sets a maximum speed limit of 5 miles per hour 1,000 feet from shoreline because the last thing we need are boat wakes creating additional waves. The emergency order also gives us flexibility in dealing with local governments and private property so we can install aquadam and other equipment to protect the shoreline."

Under normal conditions, boaters are required to obey the 5 mile per hour speed limit within 100 feet of shore. With the current state of emergency in the region, and as water levels continue to rise throughout Lake Ontario, the Governor is authorizing and directing State Parks to institute the expanded speed restriction to 1,000 feet in appropriate areas, unless otherwise directed by a County Declaration.

Waves created by boat wakes can exacerbate shoreline erosion, further threatening residential and municipal infrastructure. Reducing speeds will result in smaller boat wakes and lessen the wave action along the shore. Reduced speeds are also necessary to ensure safe boating, as many hidden hazards and debris have been covered by elevated water levels and can threaten boaters' safety. State agencies are working with municipalities to educate boaters and have positioned digital message boards at strategic locations throughout the region.

We are preparing now for the reoccurrence of the 2017 flooding situation, which as people remember was devastating and caused a lot of damage and a lot of hardship for thousands of New Yorkers.

In addition to the 200 New York National Guard activated by the Governor to assist with preparedness operations, 200 members of the New York National Guard are on standby for immediate deployment in the eight counties impacted by Lake Ontario flooding. To date, the State has deployed 20 sandbaggers, over one million empty sandbags and 560,000 filled sandbags, hundreds of pumps, and over 5,000 feet of aquadam to the impacted regions. 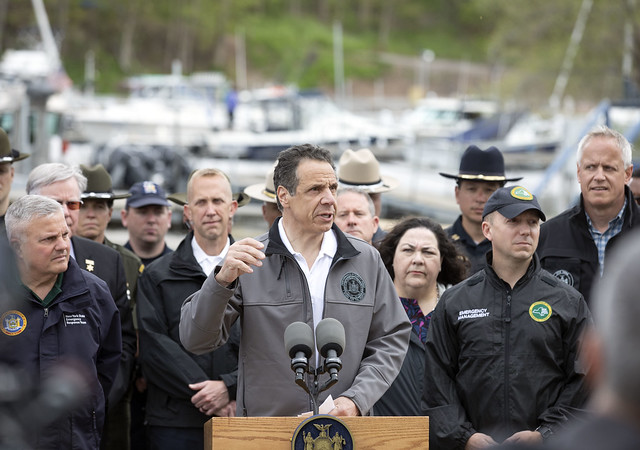 The Governor is also urging local officials to work with their County Emergency Managers to submit any resource needs directly into NY Responds, the state's web-based system that enables both local governments and state agencies to submit and share vital emergency-related information and resource requests. Emergency Managers may also submit requests through the New York State Watch Center at 518-292-2200 if they are unable to access NY Responds at the time.