Governor Andrew M. Cuomo today debuted the new Second Avenue Subway station at 86th Street, and kicked off an open house in the station that will last from 4:30 PM to 7:00 PM today. The Governor also announced that a new entrance to the subway has opened at 63rd Street and 3rd Avenue, enabling MTA customers to begin accessing the F line immediately, and the Second Avenue Subway Q Train when service begins at Noon on Sunday, and unveiled the new artwork at the station.

During the event at the 86th Street station, the Governor invited New Yorkers to preview the station, whose features include high ceilings, column-free design, vibrant lighting, and world-class contemporary artwork. Today’s open house follows last week’s at the new 96th Street Station, which marked the first time the public had access to the Second Avenue Subway since the start of construction. As with 96th Street, the words "Excelsior" and "E Pluribus Unum" – New York’s message to people who ride the subways in New York – are displayed on the beams inside of the new stations. Photos of the 86th Street station are available here and of the 63rd Street station here.

"The new stations are magnificent in both their form and their function, from the innovative design to the world-class artwork that adorns the walls, and we are excited to welcome New Yorkers to see the new stations that will become part of their daily lives," Governor Cuomo said. "The on-time opening of the Second Avenue Subway is concrete proof of the grit and determination of New Yorkers, and will provide much-needed relief to a congested system. I encourage all New Yorkers to come check out the stations and take advantage of this new, vital subway line."

The open house follows the Governor’s recent presentation of the largest public art installation in state history that will be featured in the new state-of-the-art Second Avenue Subway stations. The inaugural Second Avenue Subway ride will be on New Year’s Eve and revenue service will begin at noon on January 1.

"The on-time opening of the Second Avenue Subway is concrete proof of the grit and determination of New Yorkers, and will provide much-needed relief to a congested system."

MTA Chairman and CEO Thomas Prendergast said, "We’re thrilled to start the new year with a new Subway line and to invite all New Yorkers to come get a preview today. Launching the new Second Avenue Subway is a great moment in MTA history and we’re eager to make even more history by starting work on the subway’s second phase to 125th Street. It’s what the MTA must do every day—run the systems that are at the heart of the region’s economy but improve and expand those systems to keep the region growing even stronger. Governor Cuomo has our thanks for helping with both.”

Open Houses
To give New Yorkers a special preview of the new station and station areas at 86th, the Governor announced a special tour and open house at the 86th Street Station. The open house will begin at the North East corner of 86th Street and Second Avenue. MTA staff will be on-hand to answer questions and to distribute maps and commemorative items marking the historic transit expansion.

The new entrance at 63rd Street and Third Avenue will also open today for revenue service. Artist Jean Shin will be on hand to discuss her work, and senior MTA staff will be available there to talk about the entrance from 4:30 to 7 p.m.

The new 86th Street Station features include access for the disabled, climate control to maximize customer comfort, modern computerized signage, and column-free construction for an open, airy atmosphere. The station is 969 feet long and 45 feet wide, and was built with high-ceiling and column-free design to create an airy sense of openness. Its two-tiered mezzanine design is a fixture of the Second Avenue Subway stations and improves the flow of riders, reduces crowding on the platform and enhances the overall subway experience for riders. 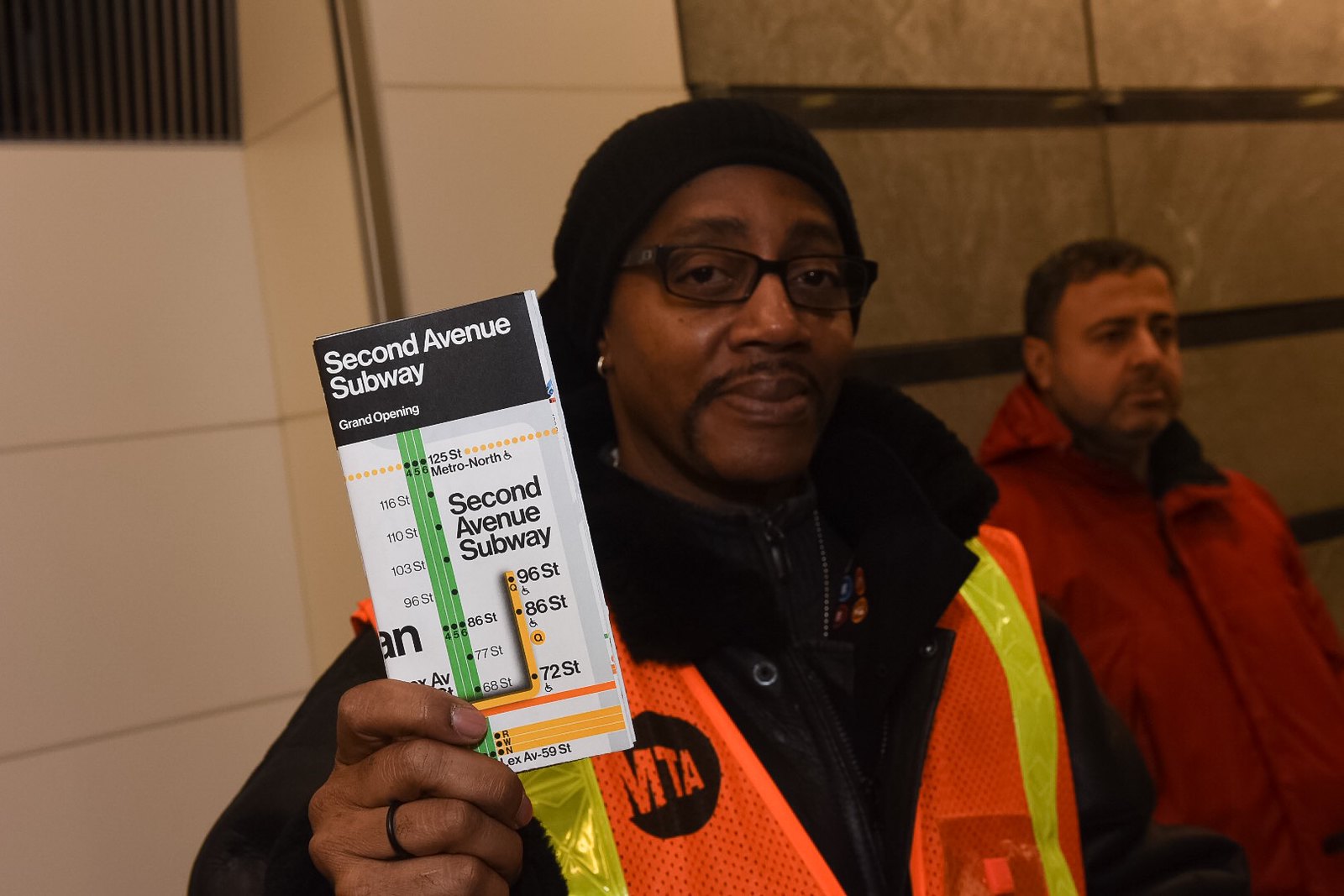 At the 63rd Street Station, Jean Shin’s installation “Elevated” uses archival photographs of the 2nd and 3rd Avenue Elevated train to create compositions in ceramic tile, glass mosaic, and laminated glass at each of three station levels – entrance, mezzanine, and platform. The images include construction scenes and historical images from the neighborhood, including semi-transparent and reflective materials that enable contemporary viewers to see themselves in the cityscape of the past.
Photos of the Second Avenue Subway art are available here;a video featuring the art is available here.

Revenue service will begin at noon on January 1, when the first uptown Q train to Second Avenue departs from the 57th-7th Avenue station. Trains will run every six minutes during peak hours and will run from 6 a.m. to 10 p.m. for the rest of the first week. Overnight service will begin on Monday, January 9.

Phase I of the Second Avenue Subway will decrease crowding on the adjacent Lexington Avenue Line by as much as 13 percent, or 23,500 fewer riders on an average weekday. It will also reduce travel times by up to 10 minutes or more for those on the far east side or those traveling from the east side to west midtown. Further phases of the project will extend the line to Hanover Square in the Financial District. The new stations will provide transfers to other subway and commuter rail lines.

As part of the Governor’s efforts to build a 21st century transportation network smarter, faster and more efficient than ever before, the state has launched a “New MTA” webpage. The webpage will offer a one-stop guide to the proposals that are part of New York’s unprecedented $100 billion infrastructure plan to build a new New York.

The Second Avenue Subway expansion is part of the Governor’s sweeping statewide initiative to redevelop and rebuild New York’s aging infrastructure from the ground up. The comprehensive plan includes a new LaGuardia Airport, completely redesigned Penn Station, the LIRR 2nd and 3rd Track projects, the New New York Bridge, a major expansion of the Jacob K. Javits Center, as well as a complete overhaul and upgrades to the MTA's seven bridges and two tunnels in the metropolitan region.