Governor Andrew M. Cuomo and Congresswoman Louise Slaughter today joined Amtrak officials to open the new, $44.3 million Rochester Intermodal Station to passenger service. The new station will speed up travel with expanded track service, streamline operations with a modern concourse and baggage handling system, and improve the overall passenger experience with enhanced accessibility, retail amenities and a larger building inspired by the aesthetics and architecture of the historic Bragdon Station, which once stood on the same site.

"This magnificent new train station will be the front door to the Finger Lakes, improving rail travel, enhancing passenger and commercial rail service while supporting tourism and regional economic growth," Governor Cuomo said. "By working together with Congresswoman Slaughter and other leaders, we have built a new Rochester Station, a gateway for the region and another significant success in our efforts to modernize transportation infrastructure across the state."

Congresswoman Louise Slaughter said, "This is a truly important day for Rochester and our region. It was seven years ago this month that I secured the first of several rounds of federal funding for this new station. Along the way, there were many meetings with stakeholders and constituents as the design took shape and construction began. I'm so proud to join Governor Cuomo today to finally cut the ribbon on our new Americans with Disabilities Act-compliant station, which will get wheelchairs and strollers easily on board. This station was built by local companies and local workers. It will improve safety, strengthen our economy, and give passengers the welcome to our great city that they deserve. It recognizes Rochester's past with inspiration from own Claude Bragdon while looking toward the future."

The station, which was turned over to Amtrak to own and operate, replaces the "temporary" station that had served the region for 36 years.  The design of the new Rochester Station is reminiscent of the iconic Bragdon Station, which was built on the site of the new station in 1914 and demolished in 1965.

Amtrak started passenger service at the new station today. The trailer that is serving as the temporary station will be removed.  Finishing work and landscaping will be completed this year.

At 9,500 square feet, the new station is larger than the 7,200 square foot former station and provides more comfortable waiting and ticketing areas. Murals of the City of Rochester hang over the ticketing counter and a mural featuring the Finger Lakes Region faces it across the waiting area.

Operationally, the new Rochester Station improves train service and reduces travel delays. It features two new dedicated passenger tracks. The former station had only one platform track, which passenger and freight trains shared, often having to slow or wait outside of the station area until the track was clear. In having two additional tracks reduces congestion, allowing two passenger trains traveling in opposite directions to stop at the station and freight trains to bypass the area without stopping.

The new station also has a two-sided, high-level passenger platform, which makes it easier for passengers to get on and off trains. That will help reduce travel delays and make trains more accessible and convenient for travelers, especially those with physical disabilities and families traveling with young children. The new station, passenger concourse, platform and passenger information display systems are all fully compliant with the Americans with Disabilities Act.

The station also has a more efficient system of handling the more than 40,000 pieces of luggage that travel through there annually. To the right of the new ticketing window, Amtrak has a secure counter to accept checked luggage. Baggage is transferred to trains through a newly constructed access tunnel to the new platform. The station also has a new, more reliable baggage cart.

Funding for the project includes $23.4 million from the State Department of Transportation and $20.4 million in federal funding, including a $15 million grant from the Federal Railroad Administration through the Transportation Investment Generating Economic Recovery Program, which was secured by Congresswoman Slaughter. The City of Rochester contributed $500,000. Amtrak contributed to the new Passenger Information Display System at the station.

Retail space will include a Taste NY kiosk featuring locally made grab-and-go food and beverages. Downstairs, the concourse features an LED cube television system highlighting the Finger Lakes and other New York State attractions. Striking black and white photographs of scenes from the City of Rochester punctuate the hallway.

The exterior of the station features a welcoming canopy over the front entrance capped by a four-foot-diameter clock set into the arched building facade above.

In addition, bicycle and pedestrian access to the station has been improved with new sidewalks, lighting and bicycle racks. Station parking has been reconfigured to improve accessibility and allow commercial bus operations to be linked to the station in the future.

"This magnificent new train station will be the front door to the Finger Lakes, improving rail travel, enhancing passenger and commercial rail service while supporting tourism and regional economic growth."

Amtrak Vice-President of Government Affairs and Corporate Communications Caroline Decker said, "Amtrak appreciates the dedication and vision of Congresswoman Slaughter and Governor Cuomo in bringing a state-of-the-art, new station to the City of Rochester and upstate New York. We are thrilled to reopen this station and serve our Western New York customers with our Empire Service, Maple Leaf and Lake Shore Limited lines for their personal and business travel, while also improving the local and state economies."

CSX Regional Vice President of Government Relations Maurice O'Connell said, "The development of the new state-of-the-art Amtrak station in Rochester is a model project that the nation will point to as an example of how a public-private partnership can be effective in meeting a community's rail transportation and economic development needs while ensuring that safe and efficient freight rail service remains available to CSX's customers. We applaud Governor Cuomo and Congresswoman Slaughter for their leadership in realizing this vision for the Finger Lakes Region of New York State."

U.S. Senate Minority Leader Charles E. Schumer said, "The grand opening of the new Rochester train station is a welcomed new gateway to the whole Monroe County region. Working together with Rep. Louise Slaughter and community leaders, we secured millions in hard-won federal investment for both this shining new station and the new RTS bus station. These upgraded transportation hubs are driving downtown redevelopment and rolling out the red carpet for residents and visitors alike to travel to and experience Rochester."

U.S. Senator Kirsten Gillibrand said, "I am extremely pleased to announce the opening of the new Rochester train station. The new Rochester train station is a source of pride for our state. It will boost our local economy and it will give New Yorkers and tourists alike a new way to travel around our beautiful Finger Lakes Region. I was proud to advocate for this new station and will continue to fight in the Senate to make sure that Rochester and all of New York have the resources needed to take on much-needed infrastructure projects like this."

Assembly Majority Leader Joseph D. Morelle said, "The new state-of-the-art Rochester Station is a vital component of our vision for Downtown's revitalization and an exciting step forward for our community. Not only will this new station increase accessibility and convenience for passengers, it will also make the area more attractive to business and tourism, fostering new economic growth. I am grateful to Governor Cuomo, Congresswoman Slaughter, and our partners at CSX and Amtrak for their commitment to this long-term project."

Senator and Senate Transportation Committee Chair Joe Robach said, "The Rochester region is experiencing a rebirth thanks in part to projects like our new, state-of-the-art train station, which will help our city grow and further develop our local workforce. I am proud to have worked with the Governor, Congresswoman Slaughter and the rest of my colleagues in government to help make this project a reality."

Senator Michael H. Ranzenhofer said, "The state-of-the-art Rochester train station will welcome passengers from across the state and region to the Finger Lakes, and show them all of our unparalleled tourism assets to drive economic growth and vitality. Thank you, Governor Cuomo, for your commitment and leadership on this project,"

City of Rochester Mayor Lovely Warren said, "Since taking office, Governor Cuomo has invested heavily in improving the lives of Rochester residents, helping us rebuild our infrastructure and move our economy forward. Today we are taking another step forward to improve this city for today and for generations to come. The beautiful new Rochester train station is another testament to the transformation underway here in Rochester."

New York State Department of Transportation Acting Commissioner Cathy Calhoun said, "Governor Cuomo and Congresswoman Slaughter know the value of a rail system that is fast, reliable and efficient for travelers and shippers, enhancing mobility and supporting local economic activity, job creation and business growth.  The new Rochester Station promises to do all that and more, improving rail service and making a lasting contribution to this city's continuing revival." 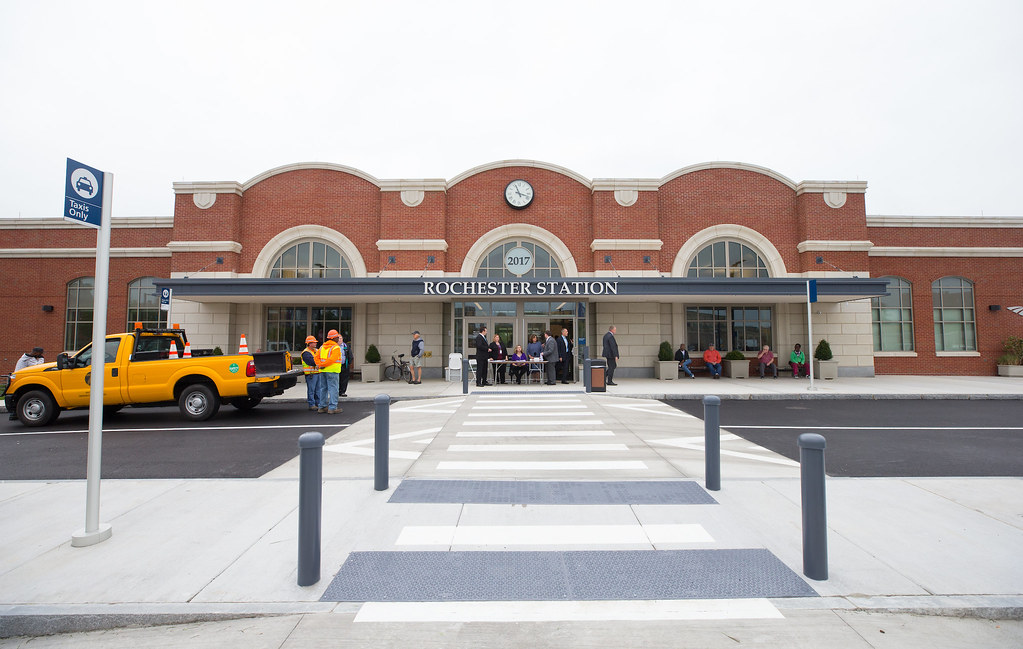 Today's announcement complements "Finger Lakes Forward," the region's comprehensive blueprint to generate robust economic growth and community development. The State has already invested more than $5.2 billion in the region since 2012 to lay the groundwork for the plan - investing in key industries, including photonics, agriculture and food production, and advanced manufacturing. Today, unemployment is down to the lowest levels since before the Great Recession; personal and corporate income taxes are down; and businesses are choosing places like Rochester, Batavia and Canandaigua as a destination to grow and invest in.

Now, the region is accelerating Finger Lakes Forward with a $500 million State investment through the Upstate Revitalization Initiative, announced by Governor Cuomo in December 2015. The State's $500 million investment will incentivize private business to invest well over $2.5 billion - and the region's plan, as submitted, projects up to 8,200 new jobs. More information is available here.