Governor Andrew M. Cuomo today broke ground on the Jacob K. Javits Convention Center expansion in Manhattan’s West Side. Following work that began on the building’s foundation in December 2016, this groundbreaking signifies the start of construction on the first phase of the $1.5 billion expansion project. Workers will begin to raise steel beams for the transformer building, which will provide power to the new Javits Center expansion. This early start will enable LendLease Turner, the construction consortium that was awarded the design-build contract last month, to jump-start work on the expansion.

The expanded Javits Center is expected to generate $393 million in new annual economic activity, reduce area traffic congestion and increase the efficiency of operations to allow for new and expanded events. The project is also expected to create 3,100 construction jobs, and an additional 4,000 full-time and 2,000 part-time jobs once the expansion is completed in 2021.

“This is no longer a promise or a proposal – we have now broken ground on expanding one of this region’s greatest economic assets, proving yet again that government can get things done,” Governor Cuomo said. “This is the new New York – meeting deadlines, fulfilling promises and supporting transformative projects that provide economic opportunity for businesses of all sizes and New Yorkers of all backgrounds. The Javits Center expansion is creating thousands of construction jobs and supporting the growth of New York’s hotel, restaurant and tourism industries for decades to come.”

The groundbreaking was made possible by the completion of the convention center's foundation and utility work, which included drilling six giant caissons to support the construction of a three-story building that will house transformers, back-up generators and other electrical equipment required to power the expanded convention center.

As the first phase of construction, the transformer building will be comprised of elevated, enclosed platforms and will be built over the Javits Center's existing transformer yard above the flood plain in order to meet the increased electrical demand of the expanded building. The building will consist of a structural steel frame with two supported levels and the floors will be concrete slab on metal deck supported by steel beams with composite studs. The foundation system consists of six straight shaft caissons that were drilled into the underlying bedrock to avoid underground utilities and the equipment of the existing transformer yard, which will remain in operation during the construction of the new transformer building.

"The Javits Center expansion is creating thousands of construction jobs and supporting the growth of New York’s hotel, restaurant and tourism industries for decades to come."

The building's roof level will have a horizontal canopy intermixed with green-screen elements and planters that support climbing vines. Acoustic panels will also be placed intermittently along the north edge of the building roof to mitigate rooftop unit noise.

In January, a design-build team was chosen to lead the expansion project following a rigorous evaluation process utilizing five technical committees to evaluate competing proposals in five areas: proposed design; project schedule; project plans and approach; MWBE/SDVOB approach; and the bidding team’s experience and financial strength. A sixth committee evaluated the bidders’ financial proposals, and a selection committee, comprised of government and industry leaders, received the committee’s evaluations and chose LendLease Turner as the design-build team, with TVS as the design firm. In addition, Tishman Construction and Lehrer LLC, both chosen through a Request for Proposals, will assist the convention center development corporation in managing the project.

The panel's recommendation was approved by the Board of Directors of the New York Convention Center Development Corporation, a subsidiary of ESD that owns the convention center's property, oversees major construction work at the facility, and issued the Request for Proposals in June 2016.

$1 billion in funds for the project have already been appropriated and proceeds from bonds sold last year by Empire State Development will finance the balance. 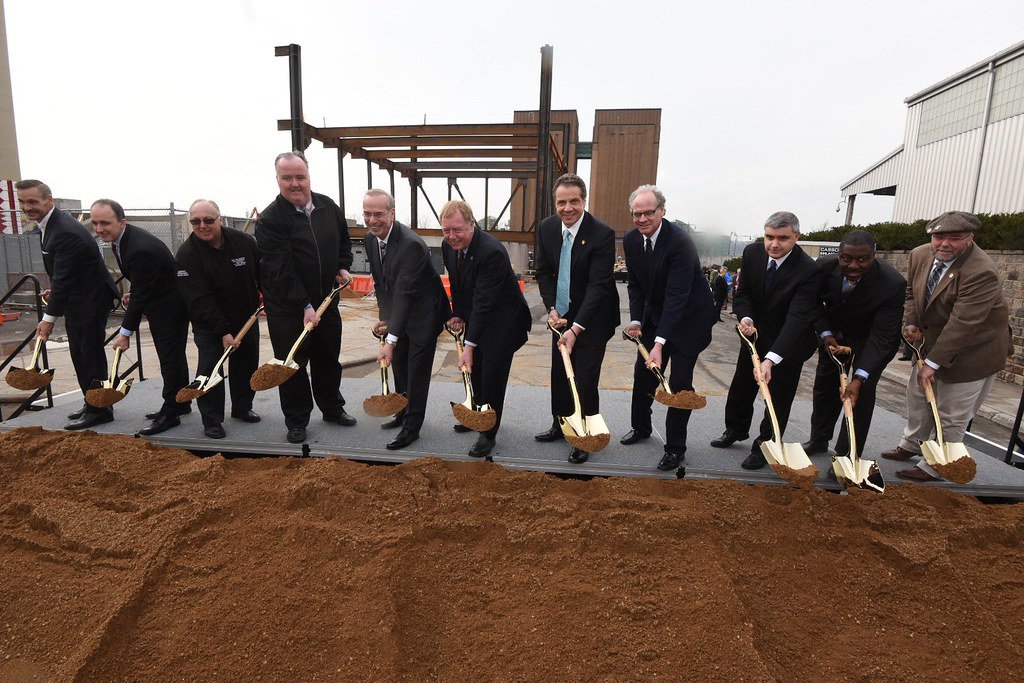 Overall, the expansion will strengthen the regional economy, create more permanent jobs and increase tourism and business involved with the Javits Center. Specifically, the expansion is projected to:

The expansion also builds upon the building’s recent renovation, which included the installation of new façade, flooring, mechanical and sustainability systems, as well as a 6.75-acre green roof that has become a sanctuary for area wildlife.

Under this project proposal, the expansion will help attract large-scale, high-spending, trade shows and conventions, while enhancing the quality of life for Manhattan communities. In addition, the construction of an on-site truck marshaling, loading and storage facility will reroute 20,000 annual event-related trucks off public streets each year, improving neighborhood traffic flow and pedestrian safety. As a result, the move-in and move-out process for events will be reduced by 30 percent, leading to an additional 20 days for new events and additional economic activity.

Empire State Development President, CEO and Commissioner Howard Zemsky said, “The Javits Center is the heart of New York’s exposition industry, and this expansion will ensure that heart is stronger than ever. This early construction work is critical to the success of an expanded convention center, and the completion of the transformer building’s foundation signifies that this project is on schedule and moving forward at a steady pace.”

New York Convention Center Operating Corporation President and CEO Alan Steel said, “The Javits Center is the busiest convention center in the United States, and this expansion project will ensure we remain the busiest in the decades to come. Thanks to Governor Cuomo, the New York Convention Center Development Corporation and Empire State Development, we are thrilled that early construction work has begun, and we look forward to utilizing the new spaces to attract even more of the country’s leading trade shows, conventions and special events.”

New York State AFL-CIO President Mario Cilento said, "We commend Governor Cuomo for his continued commitment to create good, solid, middle class jobs in our state that will give more working men and women an opportunity for a better life. This bold expansion project generates new jobs in the construction, hotel and restaurant industries while ramping up economic activity that will improve the lives and well-being of working people throughout the state."

The Javits Center is the busiest convention center in the United States and hosted events on 337 days in 2015. Located on Manhattan‘s West Side on 11th Avenue between West 34th and West 40th Streets, the six-block facility encompasses 2.1 million square feet, of which 840,000 square feet is exhibition space. It hosts trade shows, conventions, and special events that spur economic activity and job creation. In 2015, the facility hosted more than 175 events and two million visitors – ultimately supporting 17,700 jobs locally and generating an estimated 483,000 nightly hotel room reservations. In total, the Javits Center had an economic impact of $1.9 billion in 2015.