Sites Serve as National Model for Equitable Distribution of Vaccine

Two Sites to Vaccinate 3,000 New Yorkers Per Day Each, to Be Established at Medgar Evers College in Brooklyn and York College in Queens

Governor Andrew M. Cuomo today joined with White House COVID-19 Response Coordinator Jeffrey Zients and White House COVID-19 Health Equity Task Force Chair Dr. Marcella Nunez-Smith to announce that at the Governor's request, the Federal Emergency Management Agency (FEMA) will establish two community-based mass-vaccination sites at Medgar Evers College in Brooklyn and York College in Queens - which will serve as a national model for the equitable distribution of the COVID vaccine. These two major mass vaccination sites in New York City will vaccinate approximately 3,000 New Yorkers each day over an eight-week period and, like the State and City operated Yankee Stadium site in the Bronx, will be reserved only for the residents of the borough where the site is located. New York State is working with FEMA and the Centers for Disease Control and Prevention (CDC) to identify additional sites outside of New York City to launch special targeted efforts focused on vaccine equity and improving access to socially vulnerable populations, each to vaccinate 1,000 New Yorkers per day.

These sites will target communities and populations historically underserved by the traditional health care system that were disproportionately impacted by COVID-19. By increasing vaccine access in communities where vaccine hesitancy and vaccination rates are lower than other parts of the state, these sites will build on the focus of New York State and the Biden Administration to vaccinate as many people as possible fairly and equitably by creating vaccination venues in settings that people trust through partnerships with community leaders and organizations.

"COVID created low tide in America, and all the ugliness, structural racism, injustice and disparity lurking beneath the surface was exposed," Governor Cuomo said. "We know that communities of color suffered the most and from day one we've made the fair and equitable distribution of the vaccine a priority. These two new sites are going to make a dramatic impact on some of our hardest hit communities and further bolster the work we've already been doing on the ground to get shots in arms, and we're so thankful to the Biden administration for their partnership in making it happen."

Jeff Zients, White House COVID-19 Response Coordinator said, "President Biden is putting equity front and center in the battle to contain the virus - partnering with states to increase vaccinations in the hardest hit and hard to reach communities. The community vaccination sites that we are announcing today is a demonstration of what that work looks like on the ground. We appreciate Governor Cuomo, Majority Leader Schumer and the New York Delegation for their partnership in helping to make these sites a reality and look forward to building more sites across the country to meet people where they are, in places they know and trust."

We know that communities of color suffered the most and from day one we've made the fair and equitable distribution of the vaccine a priority.

White House COVID-19 Equity Task Force Chair Dr. Marcella Nunez-Smith said, "Through the new vaccination sites we are announcing today, we are taking the response directly to the communities that need it most. We're implementing a comprehensive equity strategy to vaccinate our underserved and hardest to reach communities that also includes pharmacies, community health centers and mobile clinics as well as efforts to build vaccine confidence amongst hesitant communities. We will ensure that no one is left behind in our response."

FEMA Region 2 Acting Administrator David Maurstad said, "We have worked collaboratively and continuously over the last year with our New York State partners in the war against COVID-19. The vaccine rollout is the next phase of the battle we face together. We will support the state in safely and equitably vaccinating all New Yorkers who want a vaccine. We look forward to working with Governor Cuomo to identify additional locations to serve other communities across the state."

While COVID-19 has had a damaging impact on the nation writ large, poor communities and communities of color have been particularly devastated by this virus, with Black and Latino people dying at a higher rate than white people. Since the beginning of the vaccine distribution process, another concerning trend has emerged - hesitancy towards the vaccine, especially in the Black community. With a large number of the essential workers coming from communities of color, these New Yorkers face an increased risk of contracting the virus simply due to the nature of their work. This has made it all the more important to not only continue working to instill confidence in the vaccine, but to also break down access barriers and ensure it is available directly within these communities.

With the support of FEMA, the U.S. Department of Health and Human Services, Department of Defense and other federal agencies, these sites will mobilize federal clinical and non-clinical staff and contractors who will work with the National Guard, New York State, local leaders, and community based organizations to establish and operate these sites. Each location will be tailored to meet the needs of the specific community it is serving.

Sites are currently under development. Scheduling information, opening dates, and hours of operation will be made available in the coming days.

Rev. Al Sharpton, founder and President of the National Action Network, said, "We are very grateful to President Biden and Governor Cuomo for their leadership. Having someone in the White House who knows which end is up, and a partner in New York who is fighting for vaccine equity is a recipe for success. It makes all the difference in the world - a matter of life and death." 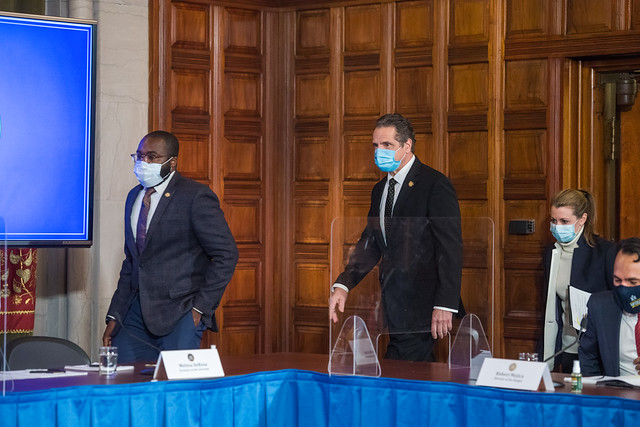 National Urban League President and CEO Marc H. Morial, who co-chairs the New York Vaccine Equity Task Force said, "Decades of structural racism in our health care system have fed a deep distrust in that system among Black Americans. Governor Cuomo and the Biden administration not only are committed to overcoming both racism and distrust, they are matching that commitment with resources. I'm proud to work with leadership that puts public health over politics. Together, we will defeat the pandemic."

Derrick Johnson, President and CEO of the NAACP said, "The NAACP is encouraged by the critical ongoing efforts of Governor Cuomo to provide relief as Black communities continue to bear the brunt of this pandemic. New York Officials and the current Administration are setting an example on what real leadership looks like at this moment. They have made it abundantly clear that thwarting this deadly virus and advising states throughout this country to work in tandem to eradicate COVID-19 is a top priority."

Governor Cuomo has made the fair and equitable distribution of the COVID-19 vaccine a top priority from the very beginning of this process. In late 2020, the Governor announced the launch of New York's Vaccine Equity Task Force chaired by Secretary of State Rossana Rosado, National Urban League President & CEO Marc Morial, and Healthfirst President & CEO Pat Wang. Since its establishment, the Task Force has continued work to ensure vulnerable and underserved communities are not left behind by breaking down the barriers to vaccination and ensuring there is equitable distribution of the vaccine across the state.

Most recently, New York led the development of a mass vaccination site at Yankee Stadium in partnership with New York City, the New York Yankees, SOMOS Community Care and the New York National Guard, specifically for residents of the Bronx, which not only continues to maintain the highest COVID-19 positivity rate in New York City, but also contains many neighborhoods considered to be 'heath care deserts.' During its first week of operation, 15,000 appointments have been made available to eligible Bronx residents.

Additionally, New York has established more than 70 temporary community-based 'pop up' vaccination sites at churches, community centers and public housing complexes directly within communities across the state which have been underserved by traditional health care systems. Since January 15, these sites have enabled approximately 30,000 New Yorkers to receive their first COVID-19 vaccine dose at these community-based pop up sites. After the administration of first doses, sites are then re-established three weeks later to administer second doses.

New York will continue to establish these pop-up sites until they have been placed at all 33 NYCHA Senior Housing Developments, which house more than 7,600 seniors. Pop-up locations will also continue to be established at other public housing complexes statewide, as well as at more than 300 churches and cultural centers which have volunteered to house these sites through Governor Cuomo's Vaccine Equity Task Force.