"City of Lights: Re-View our Waterfront" Proposal from Rochester Takes Home $100,000 Prize for Best Submission After Pitching Ideas in Front of Judges and Live Audience

Governor Andrew M. Cuomo today announced "City of Lights: Re-View our Waterfront" proposed by SWBR, Fisher Associates and MRB Group from Rochester, New York is the winner of the "Aim for the Sky" competition to re-imagine the Buffalo Skyway Corridor. The winning idea proposes removing the Skyway and redistributing traffic over a series of new facilities. A piece of the Skyway high level bridge would be re-purposed as "Skyway Park," which would provide iconic views and recreational amenities. The Buffalo Skyway Corridor competition challenged the nation's top urban designers, economists, planners and architects to reimagine the corridor - stretching four miles from downtown to Lackawanna - while also building on the investment and momentum that has transformed the city over the past eight years. Earlier today, nine finalist teams from across the United States pitched their ideas in front of a live audience and panel of judges as they competed for a $100,000 award. "Skyway River Loop" took home $50,000 for second place and "Queen City Harbor: Bringing Buffalo to the Water's Edge" took home $25,000 for third place.

"The Buffalo waterfront has always been one of our state's great assets, and by removing the existing Skyway we will lay the foundation for further transformation and growth in this community," Governor Cuomo said. "This competition generated ideas and proposals from some of the nation's greatest minds to redesign this obsolete corridor into a modern transportation network that reflects the exciting turnaround in Western New York and sends a message to the rest of the country that Buffalo is back."

"I have traveled the Skyway my entire life, and I know it's time for a new chapter in Buffalo's waterfront story," said Lieutenant Governor Kathy Hochul. "With this innovative competition, we are charting a new destiny for the transportation future of Buffalo and Western New York. I congratulate the top three teams, and thank them for putting forward creative, innovative visions for the Skyway Corridor of the 21st century."

The winning teams are:

"The Buffalo waterfront has always been one of our state's great assets, and by removing the existing Skyway we will lay the foundation for further transformation and growth in this community.

Teams participating in the competition were challenged to share solutions that could be implemented with a degree of affordability, feasibility and technical achievability - taking anticipated traffic volume into account - and superior design quality. Empire State Development received more than 100 submissions during Part 1 of the Competition - which included "summary-level" submissions that were screened against the "affordable, feasible and achievable" criteria, resulting in the 20 teams that were invited to submit final presentation boards and proposals during Part 2 of the Competition. Sixteen of the 20 teams submitted final proposals, and that list was narrowed down to nine finalist teams that pitched their ideas to a Review Panel in Buffalo.

In February, Governor Cuomo announced his plan for a national design competition to solicit the best ideas for a new vision for the current Skyway Corridor that would be completed in six months. The Skyway, a four-lane limited access expressway, extends four miles along the City's Buffalo River and Lake Erie waterfront and carries roughly 40,000 trips per day of commuter traffic as part of the regional highway system. Completed in the 1950s, the Skyway was originally designed to connect workers and truck traffic from multiple large and small factory complexes and the Port of Buffalo to the then-fledgling interstate highway system. Yet with the closings of the region's major steel plants in the 1980s and changing land uses along the corridor from heavy manufacturing to recreation, the Skyway now largely services daily commuter traffic from the Southtowns. 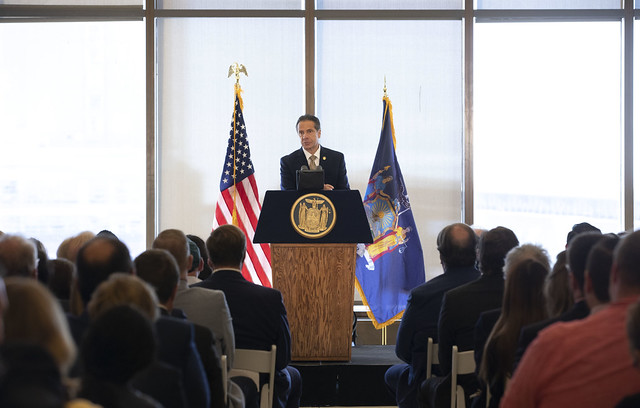 Empire State Development Chairman Howard Zemsky said, "This competition has brought forth unique ideas that challenged how we see the Skyway's place in our community.  Our winning idea is exceptional and builds upon the state's investment along Buffalo's waterfront and the region's momentum.  As we move forward to implement a solution for this corridor, I thank my fellow judges for their time and expertise and the Governor for his push to invite new voices and new ideas into our discussion on a new vision for the corridor."

Representative Brian Higgins said, "I have said many times before that the current design of the Buffalo Skyway is not only impractical, it's dangerous, and we can't simply perpetuate this relic of our past. Governor Cuomo's innovative approach to reimagining Buffalo's future beyond the Skyway through this competition will make this decades-long effort a reality. We have made significant progress transforming Buffalo's waterfront, and replacing the Skyway with a strategically designed corridor will improve access to the city's thriving waterfront destinations, better connect our communities and break down barriers to even greater economic opportunities. To ensure this project moves forward, I am committed to pursuing new federal transportation funds for removal of the Skyway and necessary infrastructure improvements that may result from a federal environmental impact study. With the anticipated cost of the project estimated to be up to $600 million, I will work to secure the approximately 80 percent traditionally funded through federal dollars, and I am confident the State will secure the remaining 20 percent.  For too long people in Buffalo settled for the status quo believing the big projects were beyond reach. That is no longer the case. Tackling the Skyway isn't about tearing something down, it's about building something up. We can do this."

Senator Tim Kennedy, Chair of the Senate's Transportation Committee said, "The purpose of this design challenge was to engage innovative urban planners and architects worldwide, in order to help determine the future landscape of our city's waterfront and incorporate a long-term, sustainable vision. I am pleased to see New York's continued investment in the City of Buffalo, and thank the Governor for leading this important competition."

Buffalo Mayor Byron W. Brown said, "Congratulations to the talented firm selected to re-design the Skyway Corridor in downtown Buffalo. Among the creative designs submitted, this proposal stood out. I would like to thank Governor Andrew Cuomo for his continued commitment to the residents and businesses of Buffalo and Western New York as we continue to build our reputation as a City of opportunity for all people."