"There is no politics or rhetoric in the number of people going into the hospital, and the increase in hospitalizations could overwhelm some regions if nothing changes by January," Governor Cuomo said. "That's the trajectory we're looking at and trying to change. We're simultaneously increasing hospital capacity and, frankly, changing how hospitals operate. At the same time we have to slow the spread by doing what we know works - social distancing, wearing masks and avoiding gatherings. If we don't, we know what closes down a region. It's called a red zone. That's the situation we're trying to avoid."

On Friday, the NYS Dept. of Health outlined the new metrics including in the state's Winter Plan for when an area is eligible to enter a "Yellow Zone" micro-cluster area. The geographic area will be eligible to enter a Yellow Zone if it has a 3 percent positivity rate (7-day average) over the past 10 days and is in the top 10 percent in the state for hospital admissions per capita over the past week and is experiencing week-over-week growth in daily admissions. Based on this criteria, the following areas today are designated as Yellow Precautionary Zones:

The current Niagara micro cluster will be expanded to include other areas in the county that have had high positivity and increasing hospitalizations, meeting the metrics for yellow zone designation.

A new yellow precautionary zone will be established in Batavia, which meets the metrics for yellow zone designation and accounts for the majority of hospital admissions from the county over the past two weeks.

A new yellow precautionary zone will be established in the Rome and Utica areas, which account for the vast majority of hospital admissions from the county and meet the metrics for yellow zone designation.

There is no politics or rhetoric in the number of people going into the hospital, and the increase in hospitalizations could overwhelm some regions if nothing changes by January. 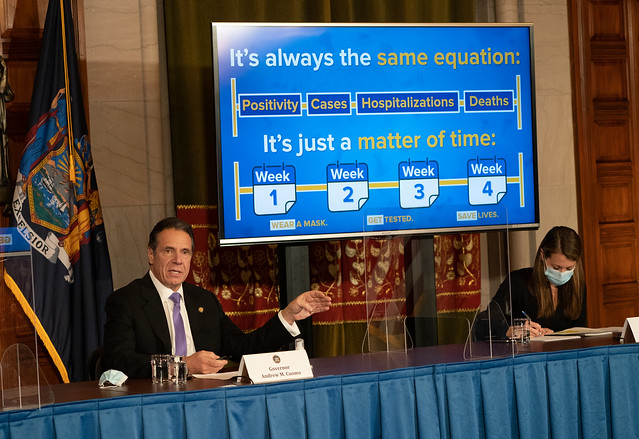 The regional hospital bed capacity and occupancy numbers, including the number of hospitalizations as a percent of the region's population, is as follows:

The regional ICU bed capacity and occupancy numbers are as follows:

Each region's 7-day average percentage of positive test results reported over the last three days is as follows:

Of the 784,204 total individuals who tested positive for the virus, the geographic breakdown is as follows:

Yesterday, 83 New Yorkers died due to COVID-19 in New York State, bringing the total to 27,870. A geographic breakdown is as follows, by county of residence: