"The City of Rome is on the cusp of transformation, and these critical resources will help the community grow and prosper for generations to come," Governor Cuomo said. "These projects will build on our progress and help usher in a new era of technology and advanced manufacturing to drive growth and economic energy throughout the Mohawk Valley."

Rome was named a DRI Round 2 winner in September. The downtown area is rich in commercial, cultural, transportation, and recreational assets that support a vibrant and walkable place within the city. The catalytic projects that will be implemented by the DRI will further the job growth in advanced manufacturing, cyber technology, unmanned systems, and craft food & beverage manufacturing that are is already transforming the region. The city plans to further development and inspire innovation, facilitate residential repatriation, promote arts-based businesses, encourage alternate transportation, and celebrate diversity. With a boost from DRI, Rome will provide the ecosystem necessary to attract and retain young professionals and their families.

These projects will build on our progress and help usher in a new era of technology and advanced manufacturing to drive growth and economic energy throughout the Mohawk Valley.

The specific projects to be funded through the DRI include:

Advanced Manufacturing Facility Construction: Construction of an advanced manufacturing facility to meet the expansion needs of an existing Rome business currently located outside of the downtown. The 50,000-sq. ft. facility will be located on the former Rome Cable Complex 3 brownfield site. ($900,000)

Capitol Theatre Renovations: Complete exterior and interior renovations of the historic Capitol Theatre, a major arts and cultural tourism destination for the region and an anchor institution for the downtown. Improvements, which include façade restoration, purchase and installation of a new marquee sign, seating refurbishment, and HVAC, electrical, and plumbing upgrades, will enhance the building's historic character and appeal, expand the theater's ability to attract high-quality programming, and bring even more visitors to the area throughout the year. ($2,500,000)

Demolish the Liberty George Parking Garage and Replace with Temporary Public Use: The Liberty George Parking Garage, a visual detriment to the downtown core, is structurally unfit for reuse. The project will allow for the demolition of the obsolete and unsafe structure and installation of an attractive, landscaped surface parking lot and open space on the site as a temporary use until a developer can be secured. The city will issue a request for proposals to develop the site in a manner consistent with the DRI plan goals. ($1,500,000)

Public Enhancements to City Hall: Creation of an expanded public space in City Hall fronting on the City Green to allow for four-season community programming. An open-air area in the City Hall building will be enclosed and expanded to create 3,000 square-foot gathering space to be used for a variety of public event and ADA accessible public restrooms. ($1,280,000)

Create an Adaptive Reuse, Business Assistance, and Public Art Fund for Downtown Rome: Establish a grant fund to leverage private investment in buildings to facilitate business retention, expansion and adaptive reuse. Improvements covered under the fund will include capital improvements and interior/exterior renovations. Grants will also be available to incorporate public art in the downtown. ($470,000)

Transform City Hall Green Space into a Four-Season Destination: Upgrade the City Green to expand opportunities for year-round public use and programming of the green space outside City Hall. Improvements will include an ice skating rink, concert stage, temporary vendor support areas, and seasonal event space, all of which will retain residents and visitors in the downtown core for an extended duration. ($400,000)

REACH Center Arts Incubator Renovations: Renovate the REACH Center at 201-211 West Dominick Street to provide 28,000 sq. ft. of collaborative creative arts space on the upper floor, and 10,000 sq. ft. of flexible rental maker space on the ground floor. Additional REACH programming will enable local artists to produce and exhibit their work while providing on the job training for creative entrepreneurs. ($250,000)

Create a Downtown CENTRO Multimodal Transportation Center: Design and construct a new CENTRO (Central New York Regional Transportation Authority) Transfer Station and surrounding site improvements to promote sustainability through multimodal transit adjacent to the City Hall parking lot on Liberty Street. The center will include a climate-controlled enclosure with a ticket kiosk, waiting area, and office. A heated sidewalk will surround the structure; bicycle storage will be provided; and attractive landscape will be installed. The project will provide connectivity with the pedestrian-oriented downtown. ($400,000)

Implement the Downtown Wayfinding System: Implement a wayfinding system to move residents and visitors through the downtown core in an active and engaging way. A variety of signs will be created based on a unified design and placemaking strategy that outlines standards for signage based on location, type, and intended user. ($150,000) 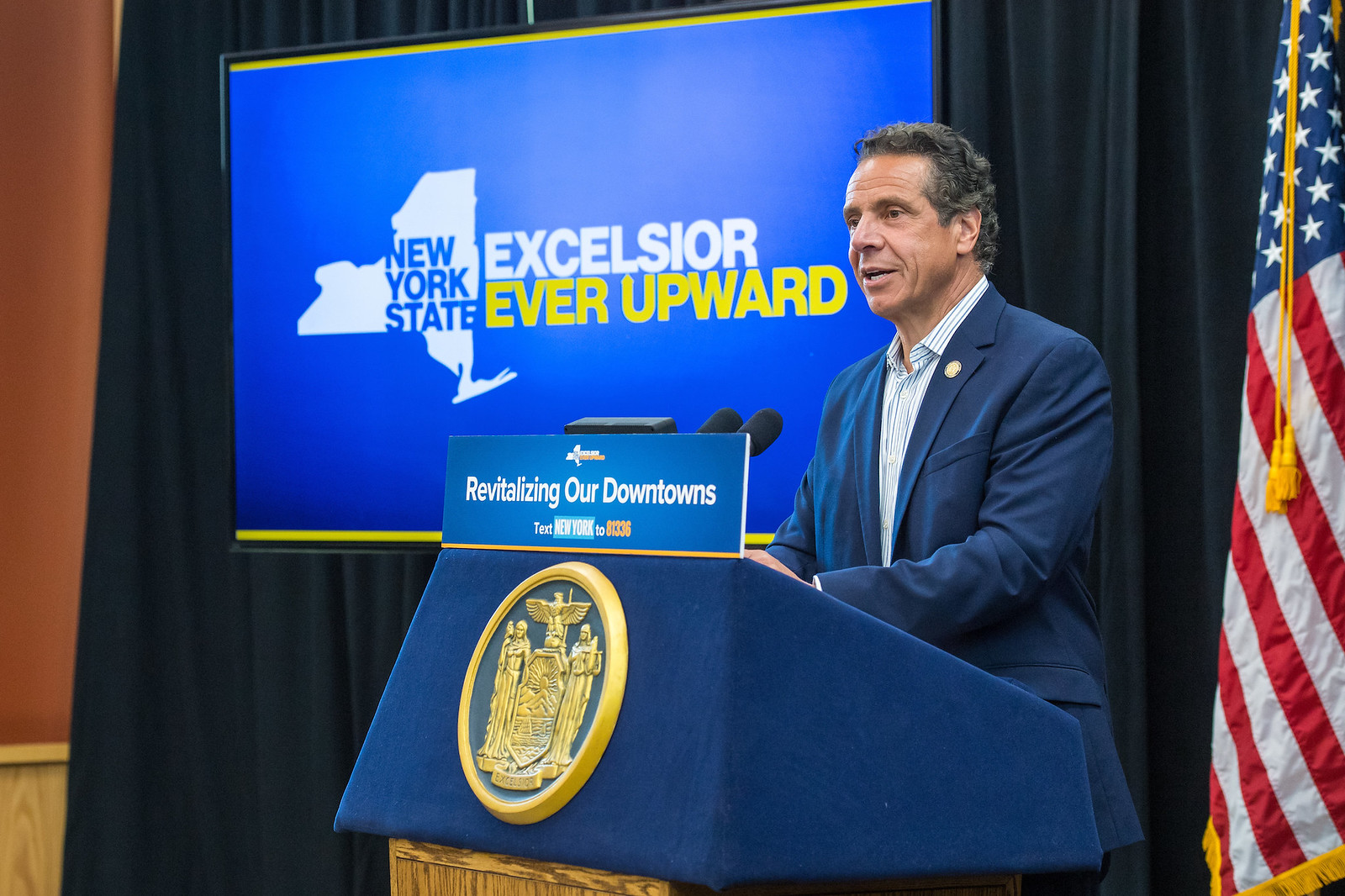 Rome developed a Strategic Investment Plan to revitalize its downtown with $300,000 in planning funds from the $10 million DRI grant. A Local Planning Committee made up of municipal representatives, community leaders, and other stakeholders led the effort, supported by a team of private sector experts and state planners. The Strategic Investment Plan for downtown Rome examined local assets and opportunities and identified economic development, transportation, housing, and community projects that align with the community's vision for downtown revitalization and that are poised for implementation.

The DRI projects are the latest example of Governor Cuomo's ongoing commitment to Rome and the Mohawk Valley. The Governor recently announced a $14.3 million investment to increase housing opportunities in the Mohawk Valley, including $10.2 million in financing for the DeWitt Clinton Apartments. In March, Governor Cuomo delivered $1 million to the City of Rome as part of Round 5 of the Restore New York Communities Initiative to remediate contamination and demolish the former Rome Cable manufacturing facility, delivering a clean 40-acre site for future development.

"The City of Rome has already seen the opportunity created by our Downtown Revitalization Initiative, and today's award will continue state investment to create a vibrant walkable downtown area," said Lieutenant Governor Kathy Hochul.  "With this latest round of funding Rome will continue strategic investments in advanced manufacturing technology, and further the development of its downtown space. This funding will create good-paying jobs, support arts-based businesses, invest in infrastructure and encourage alternative transportation. All of this adds up to a recipe for success for the future of the City of Rome."

NYS Homes and Community Renewal Commissioner RuthAnne Visnauskas said, "Through Governor Cuomo's Downtown Revitalization Initiative, these community-led, targeted investments will combine with HCR's $106 million investment in the Mohawk Valley over the last seven years that has created affordable housing for about 3,000 residents to help ensure that as Rome's economy grows, all New Yorkers have the opportunity to take part. In New York State, we are lucky to have a Governor who understands how to build inclusive, long-term economic success."

New York Senator Joseph A. Griffo said, "It is important that cities such as Rome have access to tools and resources that can help them to grow and flourish. These DRI investments have the potential to drive job growth and economic development for Rome and the entire Mohawk Valley and to better position the city for a bright and exciting future. I am pleased that Gov. Cuomo has recognized the importance of investing in cities like Rome and am looking forward to watching as these projects progress."

New York Assemblyman Anthony Brindisi said, "Downtown Rome already has the ingredients to be a magnet attracting people who want to work, live, and raise their family in a vibrant urban area. From building an advanced manufacturing facility to creating new housing opportunities to modernizing spaces across the city, these investments are exactly what downtown Rome needs to thrive in the 21st century. I thank Governor Cuomo for developing a unique program that is bringing new life to downtowns across New York. I also want to thank Mayor Jacqueline Izzo and local officials for putting together a plan that will make a difference for this community."

Oneida County Executive Anthony J. Picente, Jr. said, "From the reconstruction of the Griffis Veterans Memorial Parkway, a major artery for our residents, to bringing innovative industries and jobs to QUAD-C and the Griffis Business and Technology Park, the Governor continues to support job creation across the region, and this DRI funding builds on that success to continue to bring jobs and growth to Rome. I applaud Governor Cuomo for his leadership in this initiative and look forward to working with him to continue to improve the lives of Rome residents."

Rome Mayor Jacqueline M. Izzo said, "Across Upstate New York, the Governor's Downtown Revitalization Initiative has been a critical asset to local communities as we work to revamp and revitalize our neighborhoods, and here in Rome, the DRI funding is allowing us to build on the progress we've made and unlock the full potential of our community. I thank Governor Cuomo for recognizing the potential here in the Mohawk Valley and helping us tap into that potential to create jobs and bring new energy to Rome."