97 Percent of New Yorkers Will Have Access to High-Speed Broadband, With Goal of Serving All New Yorkers by End of 2018

Governor Andrew M. Cuomo today announced that the New NY Broadband Program has made sweeping progress toward achieving its nation-leading goal of broadband for all. On the heels of its merger with Time Warner Cable, Charter has outlined its four-year rollout plan to service 145,000 currently unserved households in upstate New York. Additionally, Charter will make available internet speeds of 100 megabits per second for more than 2 million upstate homes and businesses by early 2017 in its upstate service area, including in Buffalo, Rochester, Syracuse, Binghamton and Albany.

The Governor also unveiled the New NY Broadband Program’s Round I awards, which will connect 34,000 homes to high-speed internet for the first time. Once completed, these actions will ensure 97 percent of New Yorkers have the broadband access required to succeed in a 21st century economy, with the goal of serving all New Yorkers by the end of 2018.

“Access to high-speed internet is critical to keeping pace with the rising demands of the modern economy,” Governor Cuomo said. “The New NY Broadband Program is advancing our vision for inclusive, interconnected communities that empower individuals, support small businesses, and advance innovation. These actions are a major step forward in creating the most robust broadband infrastructure network in the nation, and ensuring that reliable, high-speed internet is available to all New Yorkers.”

Building on the progress already achieved, the Governor also announced the launch of a Request for Proposals for Round II of the State Broadband Program. The initiative will target a further extension of broadband availability to the most remote areas of the state in order to bring increased connectivity to millions of New Yorkers.

Chair of the Public Service Commissioner Audrey Zibelman said, "With new authority provided by Governor Cuomo and the Legislature to ensure cable mergers are in the public interest, the Commission secured important conditions from Charter when it approved its acquisition of Time Warner that will result in a faster broadband network and a substantial expansion of its infrastructure to serve an additional 145,000 households. We are pleased to report that Charter is planning to deliver its speed upgrade to 100 Mbps nearly two years earlier than required, and is following through on its build-out commitments. Today's announcement is a major milestone in Governor Cuomo's plan to deliver broadband for all."

Charter Executive Vice President of Government Affairs Catherine Bohigian said, “We are excited to be working with Governor Cuomo and his Administration. Charter is committed to investing in New York to deliver broadband to more unserved homes and to bring faster broadband speeds to the communities we serve. We have already begun delivering on these plans and look forward to bringing product and service enhancements at a greater value to our customers in New York.”

The Program is designed to ensure that New York’s most remote communities receive the high-speed internet they need and deserve. The Program supports the deployment of advanced technologies to achieve the Governor’s goal of providing New Yorkers with access to internet download speeds of at least 100 Mbps in most places, and 25 Mbps in the most remote parts of the state, by the end of 2018. As a result of these speed upgrades, users will be able to download HD movies in 11 minutes -- versus 2.3 hours without broadband -- and credit card transactions will be processed five times faster.

Award recipients were selected through a “reverse-auction” methodology, which prioritizes bidders seeking the lowest amount of state investment per new household served. In order to avoid cost duplication, the Charter footprint was excluded from Round I. This exclusion enabled the New York State Broadband Program Office to operate with a highly targeted scope and design an innovative auction process across the state, while preserving state funds.

Access to high-speed internet is critical to keeping pace with the rising demands of the modern economy.

Round I Award Winners

Following the conclusion of the application period for Round I, a team of expert advisors assisted the BPO in its review of applications to ensure that projects aligned with the robust goals and expectations of the Program. As part of Round I, the BPO’s grants will drive $75.8 million of total investment for broadband deployment projects$54.2 million of which will be funded by the state, and $21.6 million of which will be funded by private investment. Consistent with the Program’s vision, more than 80 percent of Round I funding was awarded to projects addressing unserved areas through each Upstate REDC region.

When combined, nearly 18,000 miles of broadband infrastructure will be deployed. The awarded projects cover 18 upstate libraries and 96 community anchor institutions, including government buildings, healthcare facilities, institutions of higher education, K-12 schools, and public safety locations. The 25 awarded projects – addressing both unserved and underserved territories – span 27 counties, including sparsely populated areas in the Adirondacks and Catskills, ensuring that all New Yorkers are connected, regardless of population density.

Twenty four of the awarded projects will provide Fiber to the Home and cable DOCSIS technologies to unserved and underserved communities, with most customers being eligible to receive Gigabit systems on par with the most technologically advanced areas across the nation. Projects will provide service to over 30,000 homes that would have otherwise been left behind if not for the state’s investment in broadband infrastructure. Round I awards:

Round II of the Program, which is launching today, will address additional unserved and underserved homes and businesses, including a portion of the areas that Verizon would have served through the Federal Communications Commission’s Connect America Fund (CAF). Round II Request for Proposal Guidelines and application questions are now available on the New York State BPO’s website.

Last year, Verizon opted to decline CAF funding, prompting the BPO and Department of Public Service to spearhead a movement urging the FCC to keep the original funding allocated to these territories in New York. The New York State Congressional Delegation soon followed suit and also advocated for the FCC to follow through with its initial proposal. In a meeting last month, the FCC responded to New York State’s concerns and accepted the request to, at minimum, confer with states in designing the national auction to best leverage funds. The BPO is now in the process of preparing additional feedback to seek alignment of the Program with CAF II funding.

The third and final phase of the New NY Broadband Program is scheduled to launch in early 2017, which will close out any remaining unaddressed service areas. Each RFP will contain refinements and enhancements that will enable the BPO to push further into unserved territory. Through the cumulative process of these three RFPs, the state is achieving its ultimate goal of broadband for all. 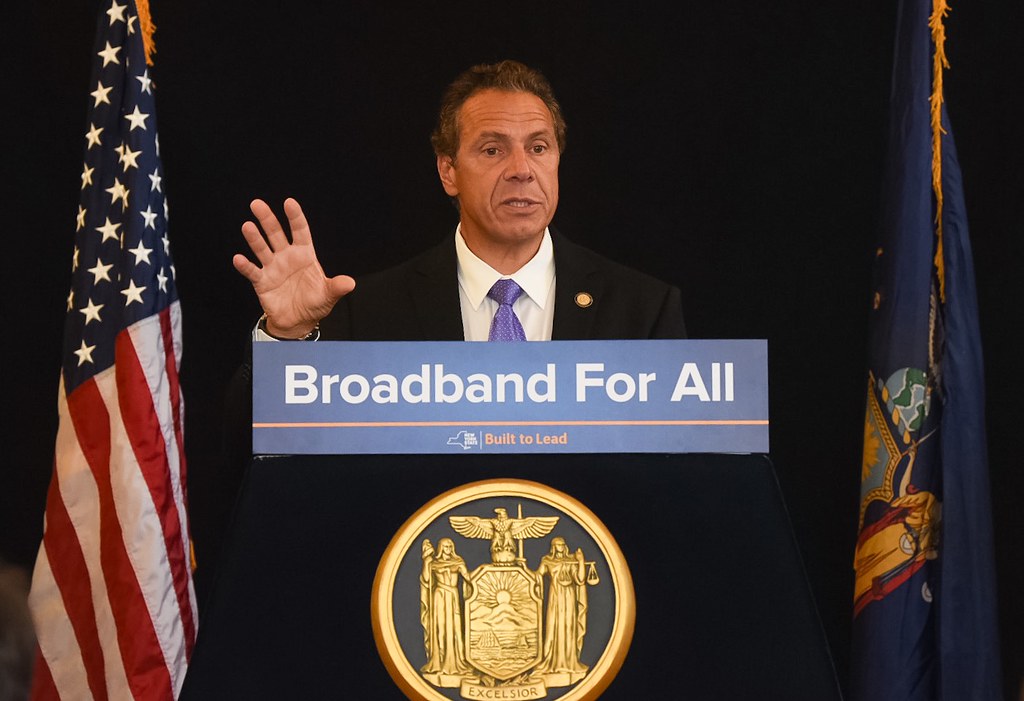 President of NYS Telecommunication Association, Bob Puckett said, "Under Governor Cuomo's leadership, New York has, and continues to do more than any other state in bringing high speed broadband to all New Yorkers. His actions establishing the New New York Broadband program will bring tremendous economic benefits to the State and enrich the lives of all New Yorkers, regardless of where they live. "

Empire State Development President, CEO & Commissioner Howard Zemsky said,“Thanks to Governor Cuomo’s vision of broadband for all, more New Yorkers across the state are realizing the benefits of high-speed internet connections, in their schools and for their homes and businesses. By first investing in the communities that need it most, we are able to remove long-standing barriers to access and create long-term solutions, leading to job growth and increased economic opportunities in every corner of New York State."

Empire State Development Executive Vice President of Broadband and Innovation Jeffrey Nordhaus said, “We congratulate Round I winners on their accomplishment. The auction process we established generated tremendous interest and we are thrilled to be able to announce rollout of state-of-the-art broadband projects in 8 REDC’s serving tens of thousands of currently unserved customers. As we announce these awards, we are immediately pivoting to Round II to continue to ensure that the Governor’s vision of broadband for all is extended to remaining homes and communities that still need service.”