Announces 2020 MTV Video Music Awards to Be Held with Limited to No Audience at Barclays Center in Brooklyn on Sunday, August 30

Governor Andrew M. Cuomo today announced the state will decide on Wednesday whether to slow down the reopening of indoor dining in New York City as part of Phase 3 of reopening. Indoor dining has been shown to pose risks in other states, and outdoor dining has been proceeding well. New York State will review data, consult with stakeholders and make a final decision.

Governor Cuomo also called on President Trump to issue an executive order requiring all Americans to wear masks in public and to wear a mask himself.

Governor Cuomo also announced that the 2020 MTV Video Music Awards will be held in the Barclays Center in Brooklyn on Sunday, August 30, with limited to no audience.

The governor also directed the New York State Police to establish a new temporary Fireworks Enforcement Detail to prevent illegal fireworks being brought to New York from Pennsylvania. The Detail's establishment is in response to a spike of illegal firework use throughout the state, which has generated widespread complaints and media reports. The detail will be in place until July 3.

The governor also announced that air conditioning filters with a Minimum Efficiency Reporting Value (MERV) rating capable of filtering COVID-19 particles or similar air exchange measures will be mandatory for large mall reopenings. A COVID-19 particle is approximately 0.125 microns in diameter. Filters with a high MERV, such as High Efficiency Particulate Air (HEPA) filters, have been shown to help reduce the presence of COIVD-19 in air filtration systems.

Our reopenings have worked very well. We're not going backwards, we're going forwards. A lot of these other states have actually had to go backwards because they started to reopen and they had to stop.

"One of the issues we're working on in New York is indoor dining, which has been problematic in other parts of the country because the virus spreads in closed, indoor areas that have air-conditioned systems. Outdoor dining has worked very well all across the state, New York City included, so the state's going to be reviewing the data and consulting with stakeholders in New York City," Governor Cuomo said. "I've started speaking with restaurant owners and local stakeholders about the risk-reward on indoor dining. We're going through the data, but this is a real issue. Our reopenings have worked very well. We're not going backwards, we're going forwards. A lot of these other states have actually had to go backwards because they started to reopen and they had to stop. We want to study this issue primarily New York City on indoor dining and we'll have a final decision by Wednesday so people who operate those types of businesses will know what we're doing."

The governor also updated New Yorkers on the state's progress during the ongoing COVID-19 pandemic. The number of new cases, percentage of tests that were positive and many other helpful data points are available at forward.ny.gov. 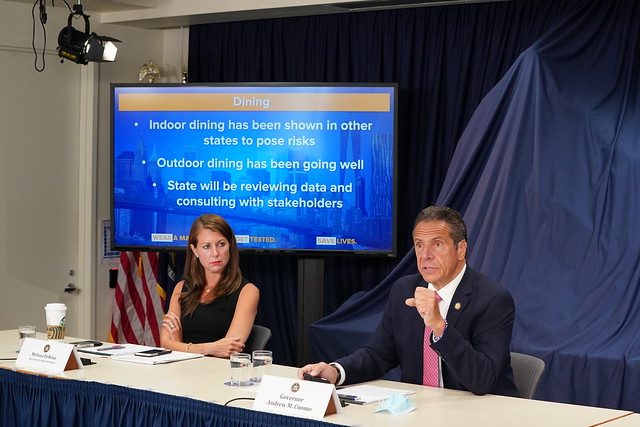 Of the 46,428 tests conducted in New York State yesterday, 391, or 0.84 percent, were positive. Each region's percentage of positive tests over the last three days is as follows:

The Governor also confirmed 391 additional cases of novel coronavirus, bringing the statewide total to 392,930 confirmed cases in New York State. Of the 392,930 total individuals who tested positive for the virus, the geographic breakdown is as follows: