Governor Andrew M. Cuomo today announced the start of construction on the new St. Nicholas Greek Orthodox Church and National Shrine in New York City. The original Church, located in Lower Manhattan, was destroyed on 9/11. The project resumes under the leadership of the Friends of St. Nicholas board in partnership with the Port Authority of New York and New Jersey.

"The start of construction on the new St. Nicholas Church echoes the overarching message of these challenging times: We are going to build back the way we built back from 9/11, and it will be better and stronger with more solidarity and more faith and more spirit of community than ever before," Governor Cuomo said. "This St. Nicholas is going to be more splendid and more inviting than the St. Nicholas that was here before. We have gone through difficult times together, but we rise from the ashes and we rise stronger than ever before. That's what this St. Nicholas will stand for. It is a powerful message to all New Yorkers and all Americans."

His Eminence Archbishop Elpidophoros of America said, "Nearly twenty years ago, our Saint Nicholas fell with thousands of our fellow human beings lost in the ashes of 9/11, and countless others wounded in body, heart, and soul by a savage act of hatred and terror. We cannot, we must not, and we shall not let this stand. We are going to open the Saint Nicholas Church and National Shrine as a sign of love, not hate; a sign of reconciliation, not of prejudice; and a sign of the ideals that exist in this great American Nation, where one's religious liberty and freedom of conscience never excludes, but only embraces."

Kevin J. O'Toole, Chairman of the Port Authority said, "In a world filled with so much uncertainty, this restart brings hope that we are closer to restoring St. Nicholas as a solemn place for parishioners and visitors to worship, reflect, and honor the innumerable sacrifices made after the September 11th attacks. The church is a symbol of the continued resilience that has helped bring a rebirth to the World Trade Center campus, and today is a day to recognize those hard-fought achievements."

We have gone through difficult times together, but we rise from the ashes and we rise stronger than ever before. That's what this St. Nicholas will stand for. It is a powerful message to all New Yorkers and all Americans.

Rick Cotton, Executive Director of the Port Authority said, "Today marks a new chapter in the historic rebuild of Lower Manhattan. The new St. Nicholas Church and National Shrine will be a source of inspiration and peace, while also helping to share the historical contributions of the Greek-Orthodox community to all who visit and worship. The Port Authority is proud to have worked alongside Governor Cuomo to bring us to this important milestone and today, we are pleased to see construction resume. I commend the work of the Archdiocese and Friends of St. Nicholas as they have worked hard to ensure that this project honors the strength and resolve of our World Trade Center Campus." 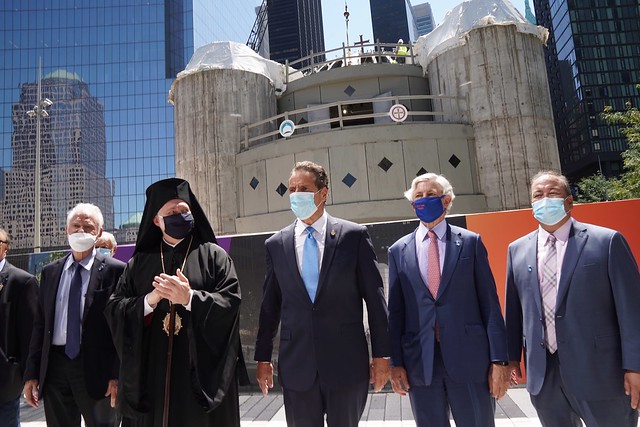 The original St. Nicholas Church at 155 Cedar Street was the only place of worship that was completely destroyed in the September 11th attacks. Upon taking office, Governor Cuomo made the restoration of St. Nicholas Church a top priority, working with the Archdiocese and the Port Authority to reach agreement on a larger, more accessible site for the rebuilding of the Church and National Shrine and personally raising donations for the privately funded complex. When completed, the new St. Nicholas Greek Orthodox Church and National Shrine at 130 Liberty Street just south of the 9/11 Memorial Plaza will serve as a place of prayer and silent reflection and also house a nondenominational bereavement center for anyone seeking solace and strength at a time of loss. The complex, designed by Spanish architect Santiago Calatrava and modeled after Byzantine churches of Hagia Sophia and the Church of the Holy Savior in Istanbul, was designed to glow in the evening hours, an ever-present beacon of hope on the World Trade Center campus.

This progress on St. Nicholas Church builds on the Port Authority's commitment to completing major projects at the World Trade Center campus. Construction continues to the north of Memorial Plaza on the Ronald O. Perelman Performing Arts Center following an agreement strongly supported by Governor Cuomo in 2018. The Performing Arts Center will include up to 200,000-square-feet of space, three halls and rehearsal space, a restaurant, and a gift shop. The center will serve as a global hub for the creation and exchange of art, ideas and culture that will present outstanding theater, dance, music and film from the United States and around the world.