Governor Andrew M. Cuomo today announced that Schenectady will receive $10 million in funding as the Capital Region winner of the fourth round of the Downtown Revitalization Initiative. As in the first three rounds of the DRI, one municipality from each of the state's 10 regional economic development regions is selected as a $10 million winner, marking another overall state goal to target $100 million in funding and investments to help communities boost their economies by transforming downtowns into vibrant neighborhoods where the next generation of New Yorkers will want to live, work and raise a family.

"With this funding, Schenectady will further enhance its vibrant downtown and transform the Mohawk Harbor into a top regional destination with unique waterfront amenities that will benefit residents and visitors," Governor Cuomo said. "The Harbor will be more walkable and better connected to the rest of the city, while key developments will fuel economic growth for the local community and the surrounding region. This is only the latest example of how the DRI Initiative has fueled the resurgence of Capital Region communities, allowing them to unleash their full potential."

"Schenectady has worked to revitalize its downtown and transform Mohawk Harbor into a waterfront destination, and this significant funding will fuel momentum for continued growth," said Lieutenant Governor Kathy Hochul. "The $10 million as part of the Downtown Revitalization Initiative will build on development and investments in the city, linking downtown to lower State Street and Mohawk Harbor ensuring enhanced connectivity and creating a more walkable community. The DRI will further strengthen the economy, create new and improved opportunities for residents, and support long-term growth and success in Schenectady, the Capital Region and across the State.

The City of Schenectady's DRI area is anchored by Proctors, one of the Capital Region's largest arts and entertainment facilities, and extends along Erie Boulevard to the recently revived Mohawk Harbor, encompassing a corridor rich with entertainment, education, office, retail, and residential amenities. In recent years, Schenectady has transformed its downtown district with strategic investments in and around Proctors, expanded its targeted development efforts to the Mill Artisan District on Lower State Street, and spearheaded the development of a waterfront destination at Mohawk Harbor. The City now envisions linking these anchor attractions and will apply the DRI award towards creating a cohesive, dynamic downtown that connects the city core to waterfront amenities.

The Capital Region Economic Development Council went through a competitive review process of proposals from communities throughout the region and considered all seven criteria below before recommending Schenectady as its nominee for winner:

With this funding, Schenectady will further enhance its vibrant downtown and transform the Mohawk Harbor into a top regional destination with unique waterfront amenities that will benefit residents and visitors.

ESD Acting Commissioner, and President & CEO-designate Eric Gertler said, "Through the DRI Initiative, which is revitalizing downtowns throughout the state, Schenectady will be able to realize projects that will connect the city's core around the restored Proctors corridor with the Mohawk Harbor waterfront. Creating walkability and connecting a vibrant arts district with a bustling waterfront will be catalysts for the sustainable development that will draw more residents and visitors to Schenectady."

Secretary of State Rossana Rosado said, "Schenectady is a vibrant community ready to continue its growth to become an economic hub in the Capital Region. Thanks to the Governor's Downtown Revitalization Initiative, this city will build upon its economic plan to propel urban development, create jobs, and foster communities where people can live, work and raise a family."

Assembly Member Angelo Santabarbara said, "Investing in historic downtown areas is a critical part of success for upstate communities and Schenectady is a proven example of that. This announcement speaks to the amazing transformation we have seen in the city's downtown area and the success that has followed. This newest investment will build on that progress with exciting new economic development projects, bringing Schenectady to another significant milestone in its revitalization." 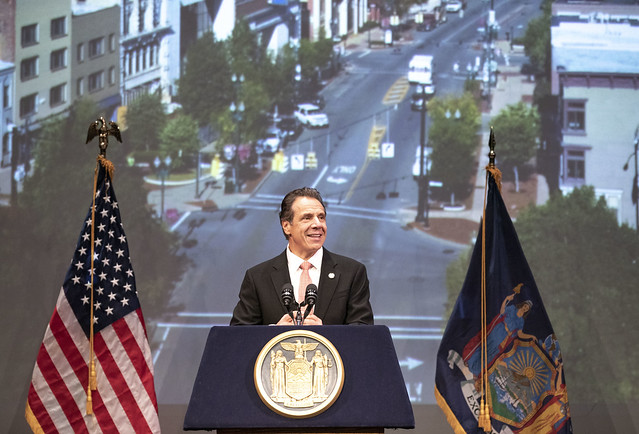 Capital Region Economic Development Council Co-Chairs Ruth Mahoney, KeyBank Market President, and Dr. Havidán Rodríguez, University at Albany President, said, "Schenectady's DRI plan calls for capitalizing on the recent investments around Proctors and Mohawk Harbor to create a connected, concentrated and walkable downtown area, and the funding awarded will support further transformative efforts to revitalize its urban core. On behalf of our fellow Council members, we offer our congratulations to the city, its officials and its residents."

Schenectady Mayor Gary McCarthy said, "The City of Schenectady is thrilled to win the latest round of Governor Cuomo's Downtown Revitalization Initiative. We have seen an incredible economic transformation in Schenectady over the last several years with new businesses creating jobs, producing new revenue, and supporting the ongoing economic growth of our community. With this new investment we look forward to strategically building upon that vibrant progress while creating new opportunities for people to live, work, and do business in Schenectady."

Schenectady will now begin the process of developing a Strategic Investment Plan to revitalize its downtown with up to $300,000 in planning funds from the $10 million DRI grant. A Local Planning Committee made up of municipal representatives, community leaders, and other stakeholders will lead the effort, supported by a team of private sector experts and state planners. The Strategic Investment Plan for downtown Schenectady will examine local assets and opportunities and identify economic development, transportation, housing, and community projects that align with the community's vision for downtown revitalization and that are poised for implementation. The downtown Schenectady Strategic Investment Plan will guide the investment of DRI grant funds in revitalization projects that will advance the community's vision for its downtown and that can leverage and expand upon the state's $10 million investment. Plans for the DRI's fourth round will be complete in 2020.