Governor Andrew M. Cuomo today announced the resumption of the Metro-North Penn Station Access Project, which had been paused by the COVID-19 pandemic and MTA funding uncertainty. The reopened process will select a firm to design and build four new Metro-North Railroad stations and make track upgrades in the Bronx. The MTA had identified three consortia qualified to bid for the project in February 2020, three weeks before COVID-19's arrival in New York raised questions about funding the historic 2020-2024 capital program. Devastating financial losses and uncertainty related to the pandemic led the MTA to pause the capital program and procurement process.

The Governor also announced that the federal government has given the MTA approval to publish the draft Environmental Assessment for public comment.

"As vaccination rates go up and COVID-19 abates, it's time to refocus our efforts on the critical infrastructure projects we need to deliver for New York's future and economic recovery from the pandemic," Governor Cuomo said. "Connecting Metro-North to Penn Station has long been an important next step not just for New York City's economic growth and development, but for protecting our environment and providing more equitable access to transit in our communities. This restarted selection process for a firm to build four new stations will expand access to transit in the Bronx and help to create a new corridor between Manhattan and the Mid-Hudson region."

With Capital Program funding becoming clearer as a result of critically needed Federal support, the MTA is moving forward to seek formal bids from the three consortia. At the same time, the MTA is making preparations for a 45-day comment period that would accompany a formal environmental review of the project. As part of that process, the public will be able to review project documents online and at physical in-person sites in the Bronx, including the Morris Park Community Association and the Bronx Jewish Community Council.

Connecting Metro-North to Penn Station has long been an important next step not just for New York City's economic growth and development, but for protecting our environment and providing more equitable access to transit in our communities.

"The most cost-effective capital projects are those that squeeze more mass transit service out of existing infrastructure, rather than always building something new from scratch," said Janno Lieber, President of MTA Construction & Development. "By rebuilding this under-utilized Amtrak rail line to accommodate new Metro-North service, this project will give East Bronx residents better access to jobs, education and a full range of opportunities."

"This is an exciting project that will be as transformative for Metro-North as it is for the Bronx," said Catherine Rinaldi, President of MTA Metro-North Railroad. "We look forward to doing everything we can to support this project to bring Metro-North service to an entirely new part of the Bronx and give customers on our New Haven Line -- historically our busiest -- a choice of new destinations as they plan their travel."

Governor Cuomo proposed the project in his 2014 State of the State address and dedicated $250 million to it in 2015. The project will bring four fully accessible Metro-North stations to the Bronx - at Hunts Point, Parkchester, Morris Park and Co-Op City. Trains stopping at those stations will serve an extension of the New Haven Line, offering rail commutation options in the east Bronx to midtown Manhattan as well as points in Westchester County and Connecticut. 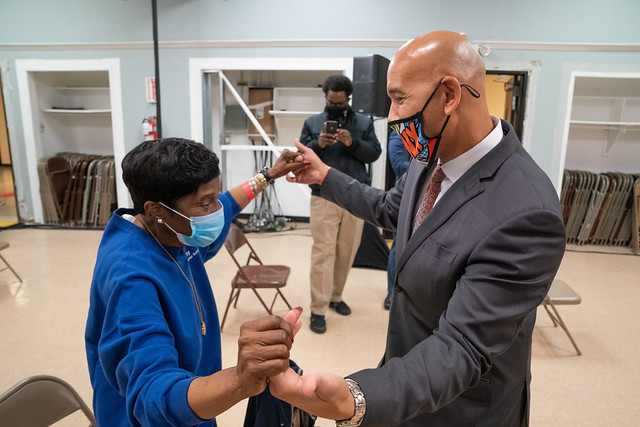 Metro-North trains will use a rail line owned by Amtrak that has long been used by Amtrak's Northeast Corridor trains, which travel through the area without stopping. This project will upgrade the line and update its infrastructure systems at the same time that it brings local MTA service to the line for the first time.

The project is one of numerous efforts to make Metro-North service more attractive and useful in the Bronx. Metro-North doubled off-peak and weekend service at Melrose and Tremont in 2017 and doubled service between Manhattan and Fordham in 2019 by eliminating a longstanding prohibition inherited from previous private railroads on the use of New Haven Line trains already making those station stops. The last Metro-North station to be newly built where none had been before was also in the Bronx, at Yankees-E. 153rd Street, which opened on May 23, 2009.

Metro-North riders from the Bronx and full New Haven Line will arrive at a Penn Station that has been transformed from the confines long familiar to Long Island Rail Road riders. The spacious new Moynihan Train Hall and a new entrance at 33rd Street and Seventh Avenue have already opened. Work is now underway to nearly double the width and height of the 33rd Street corridor that is the central spine of the Long Island Rail Road concourse.

Further work to transform Penn Station into a world-class, 21st-century transportation hub will occur simultaneously with the construction of the four new Bronx Metro-North stations. Crews at Penn Station will unite the passenger spaces of the MTA, NJ Transit and Amtrak into one larger, simplified space, bring in natural light from the streetscape, and further widen and heighten the passenger areas.

NYS Assembly Speaker Carl Heastie said, "The introduction of a Metro-North Station for the Northeast Bronx, long viewed as a transportation desert, is a major victory for residents. I would like to thank all of our elected officials and community leaders who have worked to make this a reality. Infrastructure development projects such as this are key to improving connectivity for Bronxites, while also allowing for more seamless travel to and from Manhattan, helping to revitalize our local economy as we reopen and recover from the COVID shutdown."

Rep. Ritchie Torres said, "Our mass transit system is the backbone of our economy and it is imperative that no community gets left behind. We are fortunate that this important project is moving along once again, and I applaud the Governor and his team for their vision and for fighting to make sure our communities are more interconnected as we recover from the COVID crisis."

Rep. Jamaal Bowman said, "Expanding and enhancing our transit network will be key in building back better, more equitable communities. These four additional trains stations will help reduce our dependence on cars and make many people's commutes more seamless, which can go a long way in fueling the economic growth we need. Our office has been working hard with the MTA to get this in motion, and I'm glad that we were able to work with Governor Cuomo's office to make this possible and bring these improvements to families in the Bronx."

Senator Jamaal Bailey said, "Metro-North has long been an important conduit for economic development in New York City and the Mid-Hudson region, and connecting it to Penn Station is the next step in a process to open up New York for mass transit. This project will help expand equitable access to mass transit and encourage more people to reduce their reliance on cars. The Bronx has suffered for far too long from limited infrastructure investment, leaving transit deserts in places where sizable populations of people reside. I represent Co-Op City, which is a unique community that has for too long suffered from transportation inequity. With the completion of this Metro-North station, Co-Op residents will have more reliable rapid transit. I thank Governor Cuomo for his steadfast commitment to this important infrastructure project for New York's future and look forward to seeing the four stations open throughout the Bronx."

Assemblyman Michael Benedetto said, "The people of the Bronx and Co-op City are delighted by this announcement. We have been waiting a long time and we appreciate the Governor's commitment to the project."

Westchester County Executive George Latimer said, "The Metro-North Railroad has long provided a vital economic and social connection between Westchester County and New York City, and expanding it to Penn Station is a commonsense step that will bring huge economic benefits to our county. Governor Cuomo has championed this project and I am heartened to see it move forward, even in the midst of the terrible COVID-19 pandemic. This won't just help commuters travel from Westchester to Manhattan; it will also help residents, businesses and families move from the Bronx to our county and provide new opportunities for commerce and economic development in the region."

Bronx Borough President Ruben Diaz, Jr. said, "Ensuring equitable access to mass transit is important to reach underserved communities and reduce our reliance on less efficient means of transportation. Governor Cuomo has championed this infrastructure improvement for the entire region and I thank him for his dedication to getting it done despite the COVID-19 pandemic. This project is a critical step forward expanding opportunities to take mass transit in the Bronx and providing an economic conduit between the Mid-Hudson region and New York City."