Governor Andrew M. Cuomo today announced that Radio City Music Hall will open its doors for the first time in over a year to host the Tribeca Festival's Closing Night film on Saturday, June 19th. For this event, Radio City Music Hall will operate at 100% capacity with a fully vaccinated audience. Additional details about the landmark event and screening for closing night will be announced soon.

The Tribeca Festival will be the first in-person film festival to take place in North America since the COVID-19 pandemic began. As a 20th anniversary celebration, the reimagined Festival will feature brand new viewing experiences, including outdoor screenings at locations, such as Pier 76, and Tribeca At Home, a new selection of films that will be screened online only. The Festival's Opening Night will feature a world premiere screening of the film "In the Heights at the United Palace Theater in Washington Heights and across all other outdoor festival venues simultaneously. Jon M. Chu directed the screen adaptation of the Tony Award-winning musical, created and produced by New York's own Lin-Manuel Miranda.

"As our numbers continue to decline and more and more New Yorkers get vaccinated, we can begin to turn the page on COVID and look forward to getting back to a new normal," Governor Cuomo said. "Events, venues and businesses all across New York State are reimaging how they operate for a post-pandemic world, and the Tribeca Festival is no exception. This year the Tribeca Festival will offer new, exciting ways for New Yorkers and visitors to screen the year's best films and enjoy the many events and experiences that will take place, culminating with a fully vaccinated audience at 100 percent capacity at the historic Radio City Music Hall. This is a huge step forward in our state and our nation's reopening that will let the rest of the world know New York is back and better than ever."

Tribeca Enterprises and Tribeca Festival Co-Founder and CEO Jane Rosenthal said, "Our founding mission is even more relevant today and we wanted to ensure that we could reach all corners of New York. Tribeca was started to bring people together, and that's what we aim to do again this year, to connect communities across all five boroughs and share our festival experience, safely, while supporting local businesses."

James Dolan, Executive Chairman and CEO of MSG Entertainment, said, "This is an important moment for Radio City Music Hall, the entertainment industry and New York City and we are grateful to Governor Cuomo for his leadership and commitment to making it happen. Working closely with our great partners at the Tribeca Film Festival, we are confident we will welcome a full audience to what we know will be a very special and memorable event - which we hope can pave the way for others to follow."

The Tribeca Festival was founded in the wake of 9/11 around the idea that artists and great storytelling can inspire hope, bring about change and revitalize communities during difficult times. Twenty years later, Tribeca's message rings truer than ever, particularly after a year in which New York and the larger world faced unprecedented challenges due to the pandemic.

This year the Tribeca Festival will offer new, exciting ways for New Yorkers and visitors to screen the year's best films and enjoy the many events and experiences that will take place, culminating with a fully vaccinated audience at 100 percent capacity at the historic Radio City Music Hall.

The 2021 Tribeca Festival will be a 12-day event across multiple locations with 250+ screenings, talks and performances; five immersive pieces in the Mixed Reality Arcade at Spring Studios; and programming in all five boroughs. The Festival will also feature a podcast lineup for the first time ever, as well as a series of film reunions and anniversaries. The Festival expects to reach up to 100,000 guests who can participate over the 12-day event with over 200 screenings at outdoor venues including:

Also, the Festival's Borough-to-Borough programs will bring the Festival directly to neighborhoods around New York City using traveling 40-foot state-of-the-art LED cinemas, the first mobile HD screens in the country, to connect communities to the festival experience in their own backyard. Borough-To-Borough venue locations include: 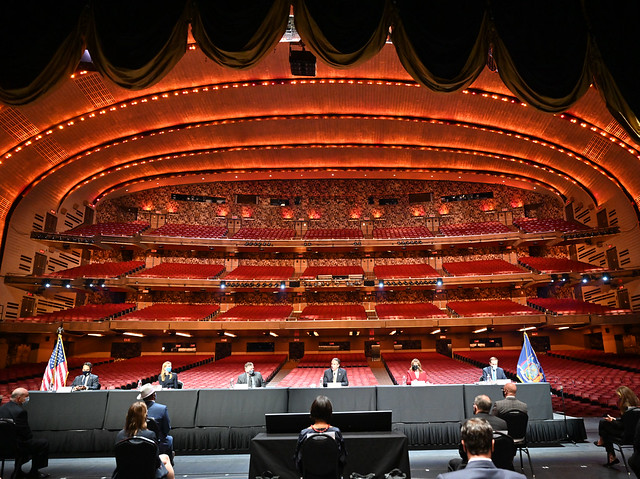 Tribeca is dedicated to supporting artists, filmmakers and creators in various forms. Since its inception, Tribeca has championed both emerging and established talent, curated innovative experiences and introduced new technology and ideas through premieres, exhibitions, talks and live performances. For more information on Tribeca and to purchase tickets, please visit www.tribecafilm.com.

Today's announcement builds on Governor Cuomo's recent measures to further reopen the economy given significant progress in vaccinations and sustained reduction in COVID-19 cases and hospitalizations. As of yesterday, 62 percent of New York's adults had received at least one vaccine dose and 52 percent had completed their vaccine series.