Governor Andrew M. Cuomo announced that the Great New York State Fair has broken the total attendance record for the fourth year in a row while setting several single-day attendance records during its 13-day run. Last year's record-breaking attendance of 1,279,010 was broken today at 11:30 a.m. Governor Cuomo presented the Williams Family of Lakeland, NY with Lifetime Fair Passes and other gifts for being the record-breaking attendees.

The Governor also announced the 2018 New York State tourism figures, which established new records for total number of visitors, economic impact and direct spending. These statistics are supported by the governor's unprecedented investments to encourage sustainable growth in tourism statewide.

"The Fair is a celebration of the state — especially upstate New York — and it represents our spirit and what we have to offer," Governor Cuomo said. "I'm proud to announce this year marks four years in a row of record-breaking attendance levels. The Fair is doing well because it's a new and different fair, which happened because we came up with a plan and we invested to rebuild it. We have invested more in upstate New York than any other administration, and the Fair is part of that investment - and we're seeing the dividends with incredible economic activity and record tourism numbers for the region and the state."

The Fair set three single-day attendance records on the way to the total attendance record, while four other days finished second. In addition, the fairgrounds are on the way to setting a record for attendance at the nearly 300 non-fair events held in fairgrounds facilities throughout the year. A centerpiece of the Fair's growth is the Exposition Center, which was completed in time for the 2018 Fair and is the largest clear-span exhibition space north of New York City between Boston and Cleveland. It was used during the Fair as a showpiece for New York State tourism and a sports activity center and is more than 70 percent booked for 2020 with privately-run non-fair events. The Expo Center is a key part of the Governor's $120 million investment in the fairgrounds, which revitalized the 129-year old facility in the town of Geddes.

The 2019 edition of the Fair increased its free entertainment, not only on its free music stages but across the grounds, with a new show focusing on bears and another featuring a tall robot. The Fair's diversity efforts also increased, as Latino Village Weekend expanded into a new home and grew to a four-day event and as the Chevy Court stage presented the first foreign-language artist in its long history, the Puerto Rican hip hop artist Farruko. The Fair also announced plans to increase recycling efforts and generate its own power as part of a five-year plan.

The total economic impact of tourism statewide reached a record $114.8 billion, exceeding $100 billion for the fifth straight year. This represents a $6.1 billion increase over 2017 (5.6 percent), and nearly $28 billion more than 2011 when the governor first took office.

Visitors to New York State generated $71.8 billion in direct spending in 2018, up more than $4 billion from last year, and a 6 percent increase over the previous year. Direct visitor spending is up more than 33 percent - nearly $18 billion - since 2011.

New York State tourism generated $8.9 billion in state and local taxes in 2018, a nearly 5 percent increase over 2017, saving each household an average of $1,221 in taxes.

Tourism remains the third largest private sector employer in the state, supporting 957,800 jobs last year, according to data from the New York State Department of Labor.

Additionally, passenger counts at all New York State airports increased 4.5 percent in 2018, with a more than 4 percent jump in hotel room demand.

Tourism statistics were provided by Tourism Economics, an internationally recognized travel data firm, using the Impact Analysis for Planning (IMPLAN) input-output model for New York State, utilized worldwide by governments, universities, and public and private sector organizations. The model follows the flow of sales through the economy to the generation of GDP, employment, wages and taxes.

New York State Agriculture Commissioner Richard A. Ball said, "The State Fair continues to get better and better every year, thanks to the continued investments by the Governor and the team that works hard all year to implement exciting new programming and entertainment while ensuring our traditional agricultural exhibits remain at the heart of the Fair. We are proud to have once again put on the best State Fair in the nation and show off the very best of New York to a record number of visitors."

The Fair is a celebration of the state — especially upstate New York — and it represents our spirit and what we have to offer.

New York State Fair Director Troy Waffner said, "We have seen an amazing response from fairgoers as a result of the Governor's revitalization plan. Last year's record-breaking attendance boosted the Fair to become the third largest Fair in the nation and we are excited to top that this year. We are clearly succeeding in our goal to put on the best Fair in the country, attracting more visitors to Central New York and growing the region's tourism economy."

Empire State Development Chairman Howard Zemsky said, "Our strategic investments in tourism attractions, promotion and infrastructure are paying dividends by welcoming more visitors than ever to New York State, and generating economic growth that supports jobs and communities across the state."

New York State Executive Director of Tourism Ross D. Levi said, "New York State's significant investments in tourism coupled with the efforts of tourism partners all across the state make for an unstoppable combination. These historic numbers are evidence that our strategic efforts are succeeding like never before in positioning New York State as the ultimate vacation destination for visitors from around the world."

New York State Tourism Advisory Council Chair Cristyne Nicholas said, "The state's tourism industry has experienced firsthand what a difference New York State's efforts have made in pushing tourism to historically high levels. This terrific partnership between the private sector and state government is producing greater dividends than either could do on its own."

Founded in 1841, the Great New York State Fair is America's third largest state fair. The Fair showcases the best of New York agriculture, provides top-quality entertainment and is a key piece of Governor Cuomo's CNY Rising strategy of growing the Central New York economy through tourism. Fair attendance is up more than 40 percent since the beginning of more than $120 million in investments, with 1.27 million people attending the Fair in 2018. The 2019 Fair runs from August 21 to September 2. Information about the Fair can be found here. 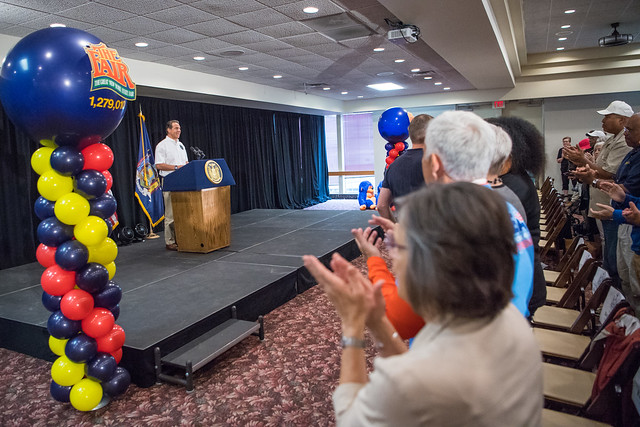