Governor Andrew M. Cuomo today announced plans for the second phase of construction at Binghamton University’s Health Sciences and Technology Innovation Park in Johnson City. The University’s $105 million project includes construction of the new School of Pharmacy and Pharmaceutical Sciences, as well as the relocation and expansion of the Decker School of Nursing to a 100-year-old historic building on Corliss Avenue. The School of Nursing project is supported by $21 million in state funding and will result in the creation 150 new jobs.

“When we invest in New York’s world-class education system today, we are laying a strong foundation for the workers of tomorrow,” Governor Cuomo said. “By partnering state investments with the innovative programs offered Binghamton University, this project will attract and retain young talent, support New York’s role as a leader in education and grow the Southern Tier economy. I am proud of New York’s role in this project and we will continue our work to create jobs, and support our students as they prepare to transition into the state’s growing workforce.”

The Governor made Binghamton University’s Health Science and Technology Innovation Park a priority in 2014 with a commitment of $10 million in capital resources to support initial planning and development costs of the new School of Pharmacy.

Building on the development and success of the University’s School of Pharmacy project, the Governor unveiled plans to support the relocation and expansion of the Decker School of Nursing with $21 million through the Upstate Revitalization Initiative. Funding will support renovations and upgrades to the historic Johnson City building, located in the Health Science and Technology Innovation Park. The expanded facility will allow the school to offer new programs in Health Sciences and Public Health, and provide additional space for clinical, educational and community partners. Renovation of the 93,000 square-foot facility will begin immediately and is expected to be completed in August of 2020.

Once complete, Binghamton University will enroll more than 430 undergraduate and nearly 170 graduate students at the Decker School of Nursing. In addition, the project will result in the creation of 150 new jobs and the retention of 325 existing jobs.

“When we invest in New York’s world-class education system today, we are laying a strong foundation for the workers of tomorrow.”

The University intends to enroll 320 students in the Doctor of Pharmacy program, as well as an additional 60 students in its PhD program. Construction of the pharmacy school facility has already supported hundreds of jobs, and once complete, the school is projected to create more than 100 new private sector jobs per year while generating an annual economic impact of approximately $100 million in the Southern Tier region.

SUNY Chancellor Nancy L. Zimpher said, “The Decker School of Nursing at Binghamton University is a world-renowned leader in education, training, and research. Bringing its facilities, students, and faculty together with a new state-of the-art School of Pharmacy and Pharmaceutical Services at the Technology Innovation Park will only lift its capacity for academic excellence and student success. Congratulations to President Stenger and the entire Binghamton University community as well as our partners across the Southern Tier on the continuing success of this project.”

Empire State Development President, CEO & Commissioner Howard Zemsky said, “This project is proof-positive that Governor Cuomo’s REDC approach is working – it aligns perfectly with the region’s strategic plan by utilizing academia for economic development and spurring downtown revitalization by transforming a vacant building into a vibrant facility with hundreds of new jobs and a much brighter future. We look forward to continuing our partnership with Binghamton University as we work together to attract investment, create new jobs and train the workforce of tomorrow, while growing and strengthening the Southern Tier economy today.” 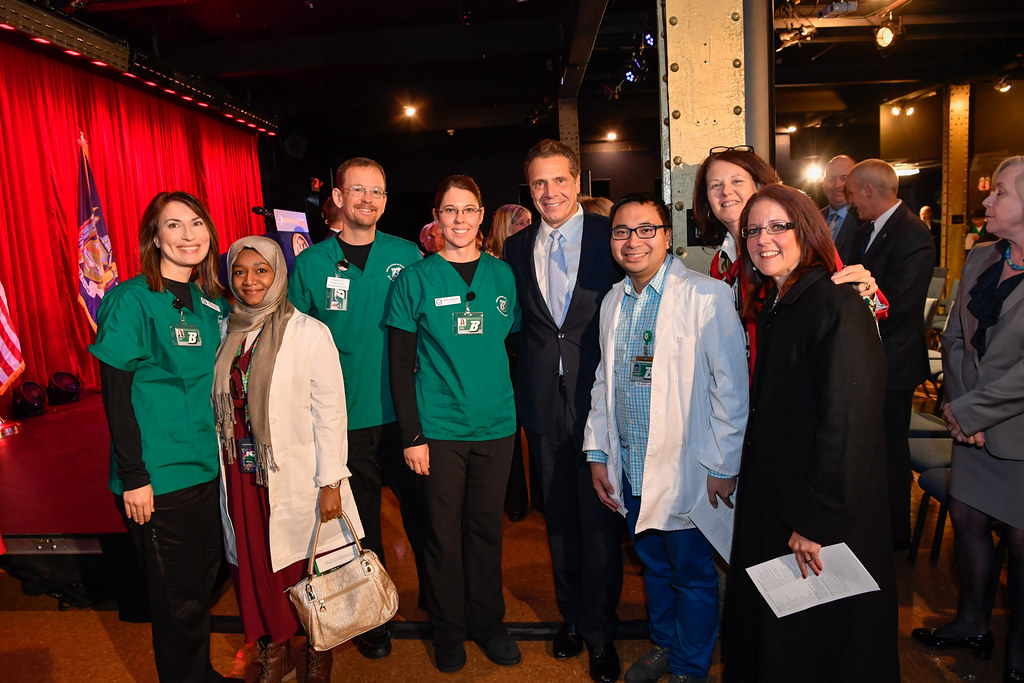 Southern Tier Regional Economic Development Council Co-Chair & Binghamton University President Harvey Stenger said, “We thank the Governor for his continued support for the University and to ensuring its’ future success. We are thrilled to learn about this latest injection of state economic support for the nursing school which will allow BU to serve not only our students, but our community as a whole.”

Senator Fred Akshar said, "Today's announcement means transformative change for the Johnson City community and for the Southern Tier at large. It's thanks to the hard work and vision of Governor Cuomo, President Stenger and my predecessor, Senator Tom Libous. I can't wait to see downtown Johnson City grow and thrive with the new Pharmacy School and School of Nursing."

Assemblywoman Donna Lupardo said, "The topping off of the Pharmacy School and Decker School announcement add to the growing sense of optimism in our community. These projects continue to build on our area's strengths as a leader in healthcare, while bringing life back to an area that is sorely in need of development. These developments also underscore the important role Binghamton University plays in anchoring the new Southern Tier economy. I'd like to thank the Governor for his dedicated focus on Upstate, and in particular the Southern Tier."

Johnson City Mayor Greg Deemie said, “This is a very exciting time for the Village of Johnson City. We are pleased that Binghamton University, President Harvey Stenger and Governor Andrew Cuomo chose us for the location of the new School of Pharmacy and the School of Nursing. It has created an opportunity for the transformation of Johnson City and a new and brighter future.”

Accelerating Southern Tier Soaring
Today's announcement complements “Southern Tier Soaring the region’s comprehensive blueprint to generate robust economic growth and community development. The State has already invested more than $3.1 billion in the region since 2012 to lay for groundwork for the plan – attracting a talented workforce, growing business and driving innovation. Today, unemployment is down to the lowest levels since before the Great Recession; personal and corporate income taxes are down; and businesses are choosing places like Binghamton, Johnson City and Corning as a destination in which to grow and invest.

Now, the region is accelerating Southern Tier Soaring with a $500 million State investment through the Upstate Revitalization Initiative, announced by Governor Cuomo in December 2015. The State’s $500 million investment will incentivize private business to invest well over $2.5 billion – and the region’s plan, as submitted, projects up to 10,200 new jobs. More information is available here.