Governor Andrew M. Cuomo today officially marked the opening the brand-new Exposition Center at the New York State Fairgrounds with a ribbon-cutting ceremony. The 136,000-square-foot Expo Center, the largest indoor events space north of New York City between Boston and Cleveland, was unveiled during the kick-off of the 2018 Great New York State Fair. The new facility, and the recently completed renovation of the Fair's Orange parking lot, complete the second phase of the Governor's plan to revitalize the State Fairgrounds. The improvements complement Central NY Rising, the region's strategy to boost the local economy.

"The new Exposition Center is a welcome addition to the Fairgrounds that will not only help bolster State Fair attendance, but provide an event space capable of hosting a record number of visitors year-round," Governor Cuomo said. "By boosting tourism and attracting businesses from across the country, the uniquely situated Expo Center will deliver lasting economic benefits to keep Central New York rising for generations to come."

"The new Expo Center continues the revitalization of the fairgrounds, improving the fair experience and attracting more visitors to our Great New York State Fair," said Lieutenant Governor Kathy Hochul. "The Expo Center's opening today creates a new space to host events and shows capable of holding a record number of people. The new center will continue to build local communities and grow the economy of Central New York."

The Expo Center, with 110,000 square feet of clear-span floor space, has the capacity to hold more than 500, 10'-by-10' trade show booths. The massive venue, which also features 4,000 retractable seats, will attract major shows and special events, including car, boat, and RV shows, pet expos, consumer and trade shows, home and garden shows, tech expos and more—many of which were previously unable to come to upstate New York due to the lack of suitable space. The Expo Center increases the amount of available indoor space on the Fairgrounds to more than 450,000 square feet.

Last year at the opening of the 2017 Fair, Governor Cuomo announced the Request for Proposals for the Expo Center design-build project was being issued by the Office of General Services. As a result of special legislation for design-build granted in the Governor's 2017-2018 Budget, the project was designed, constructed, and completed in less than one year - in time for the 2018 Fair - by a number of New York State firms including design/builder HBP Joint Venture, a joint venture between Hueber-Breuer Construction (Syracuse) and The Pike Company (Rochester); architect and engineer QPK Design (Syracuse); and owner's representatives Gilbane Building Company and C&S Companies (Syracuse).

The Governor also announced that the New York State Department of Transportation has completed a $27 million redesign and modernization of the Orange Lot, the Great New York State Fair's largest parking lot. Improvements to the 65-acre lot to improve access, enhance safety and significantly expand capacity, began last fall. More than 7,000 parking spaces are available in the freshly paved lot, up from the 4,000 to 5,000 that were available last year on a dirt surface. Access improvements will reduce delays from traffic backing up onto the Exit 7 ramps to Interstate 690, easing congestion during peak travel times.

In early August, NYSDOT opened a new exit ramp to Interstate 690 west from the western end of the Orange Lot, allowing direct access to I-690 from the State Fair and Onondaga County amphitheater. The new ramp will improve the flow and circulation of traffic exiting the Orange Lot, and help reduce delays for vehicles leaving the lot. Prior to the opening of this ramp, vehicles could only exit the Orange Lot from the Exit 7 area of I-690 during events scheduled outside of the Fair. The new ramp provides an additional exit point for vehicles to access I-690 in the westbound direction during all events.

An EZ-Pass Plus tolling system and cash lanes are also new to the Orange and Brown Lots this year. In addition, new LED lighting, sidewalks, crosswalks and pedestrian refuge areas were added to make it even easier to walk to and from the Fair. Three new bus stops with bus shelters were also installed, along with signage and an extensive drainage system for the entire lot.

The new Exposition Center is a welcome addition to the Fairgrounds that will not only help bolster State Fair attendance, but provide an event space capable of hosting a record number of visitors year-round.

The improvements mark the completion of Phase 2 of Governor Cuomo's revitalization plan. Phase 1 of the transformation plan included a full-service RV park for 313 campers and a larger, relocated Midway area that allows for more open space for Fair programming and non-Fair events. A new Main Gate entrance was also built, along with a new exhibit area for the New York State Police, and the Sky Ride, a 1,400-foot long chairlift ride. The Indian Village also received renovations to its Turtle Mound, the home of cultural performances during the Fair.

During the 2018 State Fair, the Expo Center will showcase New York's bounty of outdoor attractions with a temporary ice rink as a centerpiece to host hockey, figure skating, broomball and other special events. When not in use for events, the rink will be open for free public skating. Skates will be available free of charge as well. Activities related to the Winter Olympics will be featured to highlight New York State's legacy as the home of the 1932 and 1980 Winter Olympic games, as well as a major Olympic training facility in Lake Placid.

The I LOVE NEW YORK exhibit that debuted last year in the Center of Progress Building has moved to the new Expo Center to highlight more of the state's natural wonders. The theme of this year's I LOVE NEW YORK experience is "All Year. All Here." Fairgoers can experience New York State's four seasons and capture photos in various selfie stations. Visitors can ride a luge; test their golf swing; tour a canal boat; navigate through a corn maze; see classic, dirt and race cars; and sample Taste NY beer, wine, spirits and products. Free snacks will be provided at 3:00 p.m. every day, courtesy of JetBlue. New York State's annual tourism-themed sand sculpture will be sculpted live for fairgoers in the Expo Center as well.

The Expo Center is expected to host major programming throughout the upcoming year. After the Fair, the Expo Center will host several events in 2018 that are new to upstate including: 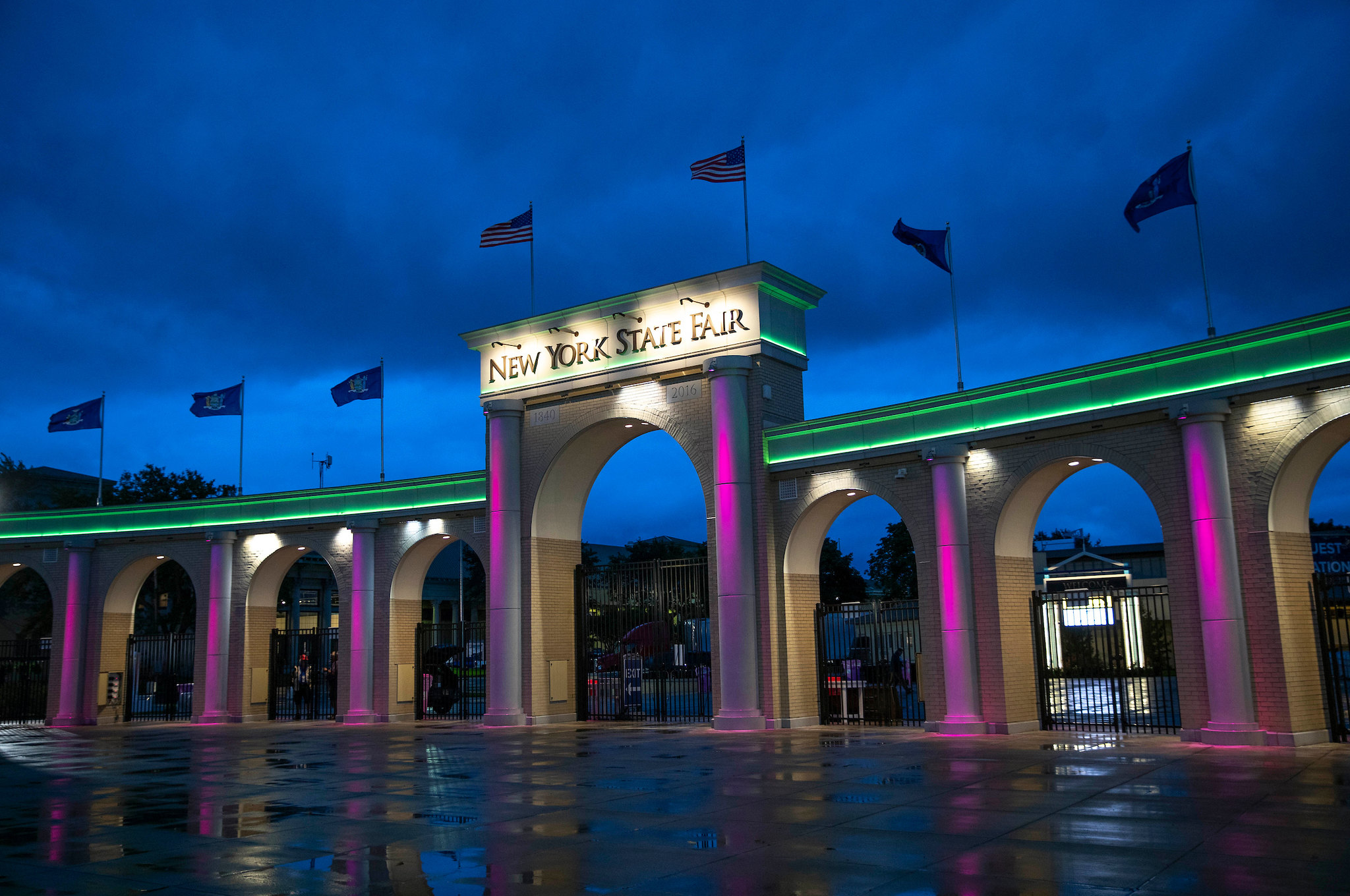 New York State Commissioner of Agriculture Richard A. Ball said, "The Great New York State Fair has marked a new milestone with the opening of the new Expo Center. This new space is the centerpiece of the Governor's plans for a reinvigorated Fairgrounds and it provides us with new and unique opportunities to promote agriculture, market Central New York and boost the region's economy."

Acting State Fair Director Troy Waffner said, "The Fair and Fairgrounds have been revitalized thanks to the Governor's vision and investments. Our year-round operation has grown sharply since renovations began and this expansion positions us well for explosive growth."

Office of General Services Commissioner RoAnn Destito said, "Guided by Governor Cuomo's vision to reimagine the Fairgrounds, and greatly aided by the use of design-build, we at OGS are very proud of the role we played in creating this wonderful new facility both quickly and cost-effectively. We are very excited for the public to experience and enjoy all the new activities and events the new Exposition Center will attract to the Central New York area as well as the State Fair."

Onondaga County Executive Joanne Mahoney said, "Onondaga County is proud to host the New York State Fair every year and we are thrilled to once again welcome visitors from across the state, country, and world to see all that Central New York has to offer. This year, the Fair is better than ever with the addition of the brand new, state-of-the-art Expo Center that will provide year-round entertainment opportunities and drive more people to the region than ever before. I thank Governor Cuomo for taking the Fair to new heights and for driving our local economy through these targeted investments."

Today's announcement complements "CNY Rising," the region's comprehensive blueprint to generate robust economic growth and community development. The State has already invested more than $4.7 billion in the region since 2012 to lay the groundwork for the plan - capitalizing on global market opportunities, strengthening entrepreneurship and creating an inclusive economy. Today, unemployment is down to the lowest levels since before the Great Recession; personal and corporate income taxes are down; and businesses are choosing places like Syracuse, Oswego and Auburn as a destination to grow and invest in.

Now, the region is accelerating CNY Rising with a $500 million State investment through the Upstate Revitalization Initiative, announced by Governor Cuomo in December 2015. The State's $500 million investment will incentivize private business to invest well over $2.5 billion - and the region's plan, as submitted, projects up to 5,900 new jobs. More information is available here.