Memorializes Victims of the 2016 Pulse Nightclub Shooting in Orlando

Governor Andrew M. Cuomo today announced the opening of New York's official monument honoring the LGBT community, including those lost in the Orlando Pulse nightclub shooting in June 2016, and all victims of hate, intolerance and violence. The memorial, designed by artist Anthony Goicolea, is located at the western edge of Greenwich Village, in Hudson River Park.

This memorial serves to honor the lives cut tragically short in the Pulse nightclub shooting two years ago as well as the lifelong struggle and adversity faced by countless individuals in the LGBT community," Governor Cuomo said. "As we recognize the sacrifice this community has had to endure throughout the course of history, we are reminded of our commitment to protecting and advancing the rights of the LGBT community until we live in a world free from hate once and for all."

Following the tragic shooting in Orlando, Florida on June 12, 2016, Governor Cuomo issued Executive Order No. 158, establishing the LGBT Memorial Commission, with the mission to design and build a new memorial in honor of the LGBT community and the victims of the Orlando shooting. The Commission issued a request for proposals in October 2016, and all submissions were judged on their interpretation and clarity of the theme, creativity and originality of depicted theme, quality of artistic composition, site compatibility, and constructability, among other factors.

The site-specific design works in harmony with the existing attributes of Hudson River Park and promotes thought and reflection while encouraging people to unite in a communal environment. It features nine modified boulders, some of which are bisected with a clear, laminated, borosilicate-glass with refractory components that act as a prism to create subtle rainbow patterns on the surrounding lawn and nearby objects.

This memorial serves to honor the lives cut tragically short in the Pulse nightclub shooting two years ago as well as the lifelong struggle and adversity faced by countless individuals in the LGBT community.

The Commission worked with the community and other stakeholders through the installation process.

Senator Brad Hoylman said, "This memorial will serve to stand the test of time and forever memorialize the LGBT lives that have been lost to senseless violence and hate. For generations to come, visitors to this memorial will be reminded not just of the progress we've made, but the loss and pain that has been endured by this community in the fight for equality and justice. I thank Governor Cuomo for preserving the memory of those who are no longer with us and for continuing to stand up for New Yorkers, regardless of sexual orientation or gender identity."

Assemblymember Deborah Glick said, "This historic monument is a tribute to our NY values and will serve as an enduring symbol of justice, tolerance, and equality for all. I'm grateful to Governor Cuomo for his work to celebrate our community."

New York City Council Speaker Corey Johnson said, "The horror of the Pulse nightclub shooting is forever etched in our collective memories, and this memorial will help ensure we honor the victims and keep in mind the ongoing struggle of the LGBTQ community. I'm grateful to Governor Cuomo for creating the LGBT Memorial Commission, to Anthony Goicolea for his beautiful design, and to the Commission members for shepherding this project to completion. Their work inspires us to keep fighting for full LGBTQ equality everywhere."

Artist Anthony Goicolea said, “The memorial encourages people to look beyond the exterior of what they are presented with. The proportion of the rocks and their circular arrangement creates a safe harbor that beckons visitors to rest upon them, acting as a unifier to communities of differing people who will come to sit, visit, commune, mourn, love and remember.” 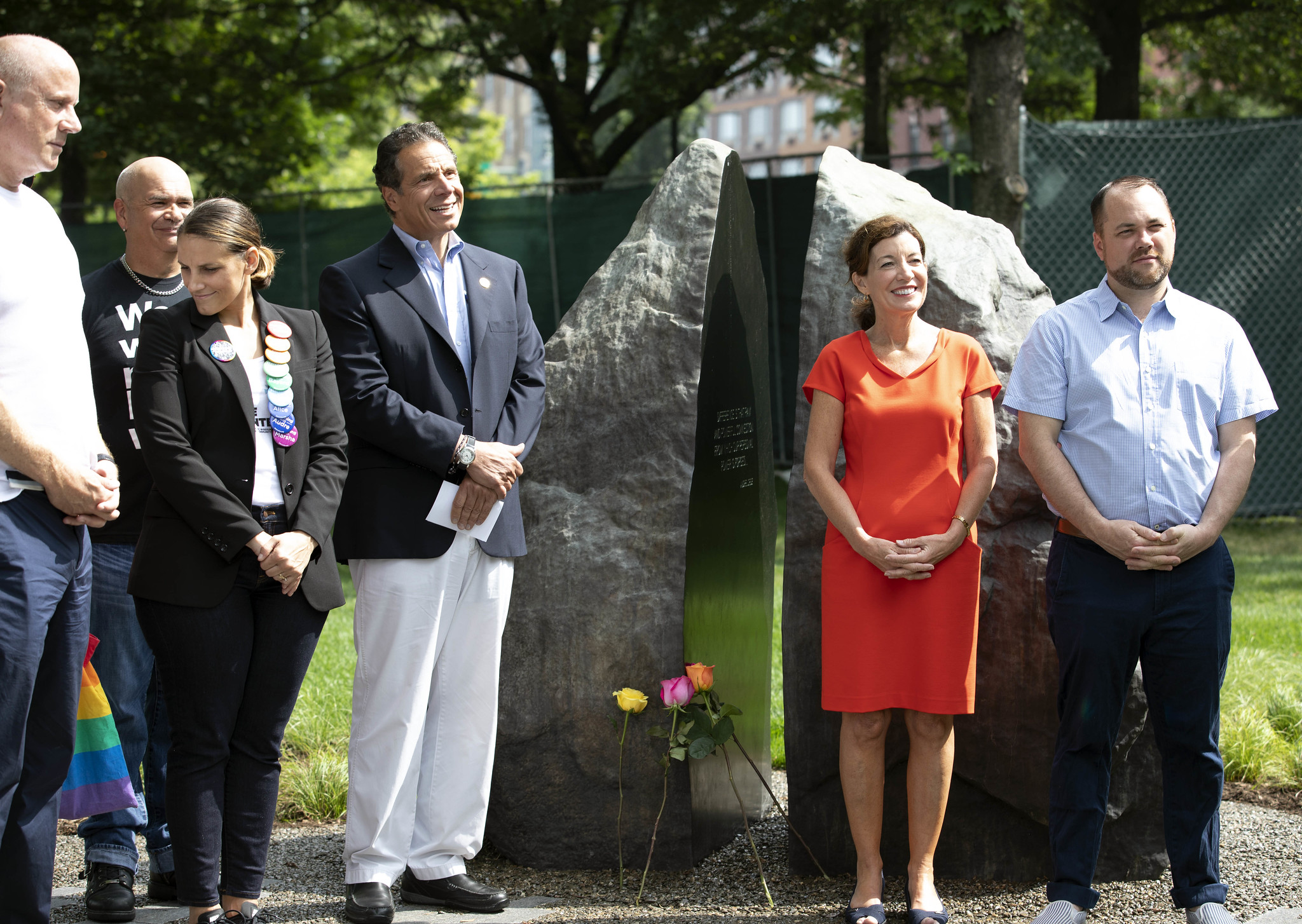 Throughout his time in office, Governor Cuomo has been a national leader in championing LGBT rights. In 2011, New York passed the historic Marriage Equality Act and sent a message to the nation that it was time to end one of society's greatest inequities. In 2015, Governor Cuomo implemented regulations affirming that all transgender individuals are protected under the State's Human Rights Law, and all public and private employers, housing providers, businesses, creditors and others should know that discrimination against transgender persons is unlawful and will not be tolerated in New York State. Last year, Governor Cuomo nominated Paul Feinman to the state's highest court - the New York Court of Appeals - becoming the first openly gay person to serve on the court.

Additionally, the Governor Cuomo has committed to making New York the first state in the nation to end the HIV/AIDS epidemic, banned the deplorable practice of conversion therapy, and strengthened health care and insurance regulations to protect transgender New Yorkers.

The Governor announced that all HIV-Positive individuals in New York City will now be eligible for housing, transportation and nutritional support through a significant expansion of Emergency Shelter Assistance. This marks the latest in a series of actions that the state has taken to protect all New Yorkers from discrimination, building on the historic enactment of the Hate Crimes Act which made discrimination based on sexual orientation illegal in 2000.