First of Delta's Four New, State-of-the-Art Concourses on Eastern Half of Airport Opens to Passengers Next Week with Sweeping Views of Citi Field and Flushing Bay

Governor Andrew M. Cuomo today announced the opening of the first new concourse and gates at Delta Air Lines' new Terminal C as part of the ongoing $8 billion transformation of LaGuardia into a unified 21st century airport. This opening is the latest milestone in the complete rebuild of LaGuardia Airport, which will provide a world-class passenger experience featuring modern customer amenities, state-of-the-art architecture, more spacious gate areas and a connected terminal system. The seven new gates in the Delta concourse, on the far eastern side of the airport, will start serving passengers - running 60 flights per day to Boston, Chicago and Washington, DC - on Monday, November 4. This is the second new concourse to open as part of the complete rebuild following the opening of the new 18 gate concourse that Governor Cuomo unveiled at Terminal B last December on the airport's western half. Additionally, last week the Port Authority board of directors approved the funding needed to build the LaGuardia AirTrain.

"The opening of the first new concourse at Terminal C is a major milestone that takes us one step closer to transforming LaGuardia Airport into a global gateway worthy of this state," Governor Cuomo said. "We're building the nation's first completely new airport in 25 years and showing the nation and the world that you can be ambitious and get big things done. At the end of the day, the new LaGuardia Airport will provide a world-class passenger experience with state-of-the art terminals and concourses like the one we're in today, new roadways and improved traffic flow, and 50 percent more tarmac space to reduce gate delays."

The Governor was joined by Delta CEO Ed Bastian, Queens Borough President Melinda Katz and representatives of the Port Authority of New York and New Jersey to cut the ribbon on the new concourse which spans 105,000-square-feet and offers floor-to-ceiling views of Flushing Bay and Citi Field.

Delta's first new concourse on the eastern half of LaGuardia represents another step forward in the complex, multi-phase construction plan designed to enable the 30-million passengers-a-year airport to remain fully operational while the entire airport is rebuilt. Under the plan, old facilities are demolished only as new facilities are completed, ensuring the airport never loses capacity. Even during construction, LaGuardia has continued to set new records for passenger volume. Eight of the airport's 12 busiest days on record occurred this past summer, and 2019 is on pace to serve over 31 million passengers.

Last week, the Port Authority's Board of Commissioners formally authorized the funding needed to develop AirTrain LGA, which would connect the airport with a new station at Willets Point linked to enhanced Long Island Railroad service to and from New York City, providing for reliable and predictable travel times and alleviating the traffic and parking burden on local communities. In May, the FAA commenced the formal environmental review for the proposed AirTrain LGA, and the authorization of the project is subject to the FAA's ongoing federal environmental review.

Governor Cuomo opened the first new concourse and gates of the new LaGuardia last December at Terminal B, on the western side of the airport. With today's announcement of seven new gates opening on November 4th, roughly one-third of all passengers will be traveling through gates of the future "Whole New LGA."

We're building the nation's first completely new airport in 25 years and showing the nation and the world that you can be ambitious and get big things done.

At the new concourse, Delta has incorporated digital wayfinding signs to provide customer guidance and added hearing loop technology in every hold room for those with impaired hearing. Pilots will also notice upgrades with the new concourse such as a visual docking guidance system that assists with aircraft parking and automatically positions the passenger boarding bridges close to the aircraft to provide safer and deplaning and boarding.

The new facility is powered by a 12-megawatt Con Edison substation, which is integrated into the upper level of the concourse, with cooling towers, chillers, pumps and other equipment to service the terminal. All major electrical and mechanical equipment is housed on the upper level to protect such systems from water/flood damage in the event of a major storm. The concourse also features an ice-generation system that reduces electrical consumption at times of peak demand in the summer by creating ice at night, when energy demand is lower, and using it to cool the building during the day.

Delta operates more than 275 peak-day departures from its LGA hub and began construction on the $4 billion replacement of Terminals C and D in August 2017, building on the airline's extensive investment in New York airports over the past decade.

Governor Cuomo first unveiled the vision for a comprehensive redevelopment of LaGuardia Airport to create a unified airport and 21st century customer experience in 2015. Construction began on the $8 billion project, roughly two-thirds of which is funded through private financing and existing passenger fees, in June 2016.

On the western side of the airport, the new $4 billion Terminal B, being built and operated by the private consortium LaGuardia Gateway Partners (LGP), is replacing the obsolete terminal that opened more than 50 years ago. On the eastern side of the airport, Delta Air Lines' new $4 billion Terminal C will ultimately comprise a total 37 gates across four new concourses. As part of the redevelopment project, each new terminal will be equipped with electric ground service equipment charging facilities to accommodate an electric fleet.

LGP and Delta are privately financing roughly two-thirds of the redevelopment's costs, and the Port Authority has committed the remaining one-third - most of it for overhauling and simplifying the current labyrinth network of on-airport roadways.

The new terminal buildings will be located closer to the Grand Central Parkway than the existing terminals, increasing the size of the airfield and allowing for dual taxiways to reduce gate congestion, while also enabling larger gate areas to more efficiently accommodate modern aircraft. State-of-the-art security technology will be integrated from curb to gate.

The past 20 months have been critical for the project as progress has accelerated. In February 2018, the new Terminal B parking garage opened with 3,200 spaces, including more than 2,400 for personal vehicles and a dedicated level for Uber, Lyft and other for-hire car services. In December 2018, Governor Cuomo opened the first of 18 new gates and the first new concourse in Terminal B on the western side of the airport, which serves American Airlines, United Southwest and Air Canada.

Overall, the redevelopment of LaGuardia is anticipated to create a combined $10 billion in economic activity and $2.5 billion in wages over the life of the project. LaGuardia Airport contracts with certified minority and women-owned businesses (MWBE) have now exceeded $1.3 billion. At Terminal B, LaGuardia Gateway Partners has over $853 million in contracts with commitments with 279 MWBE firms to date, and at Terminal C, Delta has nearly $510 million in contracts and commitments with 154 MWBEs for a combined more than $1.36 billion awarded to MWBE organizations. 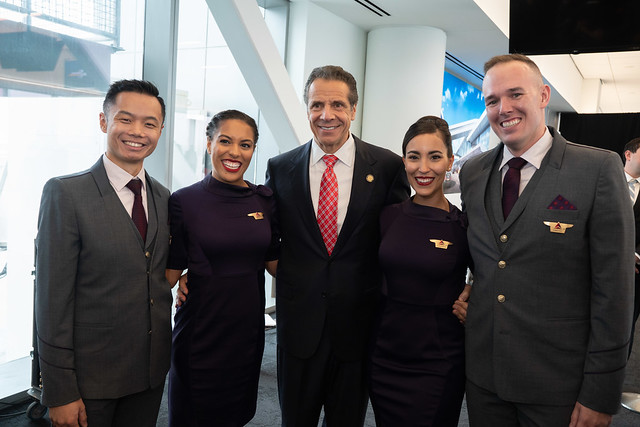 Delta is the largest employer at LaGuardia and employs over 1,800 Queens residents across its facilities at LGA and at JFK. Delta's partner at the new Terminal C, hospitality group OTG has already hired 120 new employees for the concessions at the new concourse, and 80% are from Queens.

These hires will build on the nearly 400 new hires for jobs at the airport's new Terminal B concourse, with 55 percent of those hires being Queens residents. In addition, the LaGuardia Redevelopment program has partnered with Vaughn College and LaGuardia Community College to create internship programs and fund scholarships for local youth. This summer, LGA Redevelopment funded a 6-week STEM education program for 50 middle school students at Langston Hughes Library in Corona.

Governor Cuomo and the Port Authority continue to work with local stakeholders and Queens residents to ensure local businesses, MWBEs and jobseekers take advantage of new opportunities as part of LaGuardia Airport's redevelopment and economic growth. In April, Governor Cuomo announced the opening of the new Council for Airport Opportunity office in Corona. The non-profit provides airport-related recruitment and job placement services to minority and disadvantaged residents in Queens. To help continue that work, a lease has been signed on a permanent LaGuardia Redevelopment community office in East Elmhurst.

Port Authority of New York and New Jersey Executive Director Rick Cotton said, "The opening of the new Delta concourse and gates mark another key milestone of the $8 billion redevelopment of an entirely new LaGuardia Airport. The transformation of LaGuardia airport is part of The Port Authority's ongoing commitment to improve passenger experience and provide travelers with world class facilities."

Assembly Member Amy R. Paulin, Chair of the Assembly Committee on Corporations, Authorities and Commissions said, "Between the complete remodeling of the concourse and gates at Terminal B and this new state-of-the-art concourse opening this month at Terminal C, the LaGuardia Airport of the future is taking shape before our eyes. The Governor has challenged our state public authorities to deliver world-class infrastructure projects to the benefit of New Yorkers and visitors from across the country and the world. The public-private partnership developing this new LaGuardia has once again risen to the challenge."

Queens Borough President Melinda Katz said, "The opening of Delta's new concourse and gates at Terminal C is a tremendous step forward in our effort to build a state-of-the-art, 21st century airport the borough that calls it home deserves. Creating a whole new LaGuardia also means investing in our families and our communities, not just our infrastructure, and Queens is thrilled that 80 percent of the employees hired to work at the new concourse's concessions are borough residents."

Delta CEO Ed Bastian said, "Two years ago, we set out to build a state-of-the-art facility at LaGuardia Airport, an airport that our customers and the people of New York deserve. Thanks to the commitment and hard work of the Delta team and our many partners, today marks the beginning of a new era for millions of Delta customers at LaGuardia. The excitement that is building here is palpable and contagious, and we are already looking ahead to many more milestones to come."