Governor Andrew M. Cuomo today announced that Downtown Oneonta was selected as the winner of the $10 million Downtown Revitalization Initiative in the Mohawk Valley. The Downtown Revitalization Initiative, first laid out in the Governor’s 2016 State of the State address, marks a comprehensive plan to transform local neighborhoods into vibrant communities where the next generation of New Yorkers will want to live and work.

The winner was selected as part of a competitive process by the state’s Mohawk Valley Regional Economic Development Council and will receive $10 million in state funding to revitalize the local neighborhood and generate new opportunities for long-term growth and prosperity. The award will include up to $300,000 in planning funds for private sector experts to work with a local planning committee to draft a Strategic Investment Plan that will identify specific economic development, transportation, and housing and community projects. The grant is part of a $100 million effort to improve the urban vitality of city centers across the state. Plans will be completed by early 2017.

“New York’s downtown neighborhoods are the epicenters of culture and commerce, and with the Downtown Revitalization Initiative, we are unlocking their full economic potential,” Governor Cuomo said. “As an urban center, situated along the beautiful Susquehanna River, Oneonta’s unique assets position it to become an economic anchor for the Mohawk Valley. This investment will transform Oneonta’s downtown area, bolster its academic and business opportunities, and ensure it remains a cornerstone of the region’s growth for years to come.”

“Governor Cuomo's unprecedented Downtown Revitalization Initiative acknowledges that thriving urban centers are key to changing attitudes and bringing people back to our communities," said Regional Economic Development Chair Lieutenant Governor Kathy Hochul. “I have seen first-hand how revitalizing one downtown can be transformative for an entire region. With support from the Regional Council, that's exactly what we expect will happen here.” 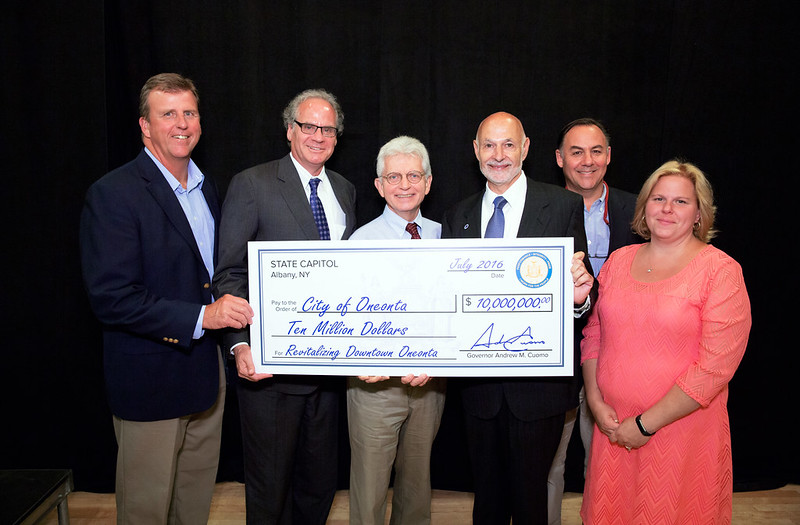 The City of Oneonta

With assets that include mixed-use housing, intermodal transportation, a vibrant culture and arts district, and anchor institutions, such as Hartwick College and SUNY Oneonta, the City of Oneonta, situated along the Susquehanna River, is poised to transform into a 21st century, regionally competitive community while maintaining its quaint, small-town essence. Under the DRI, Oneonta will focus on projects in the downtown area that will leverage significant private investment to promote sustainability and reduce the city’s carbon footprint, provide new housing opportunities, create a Food and Craft Beverage Innovation District, and expand upon its economic potential as a regional center of culture and commerce.

The Downtown Revitalization Initiative is chaired by former New York Secretary of State Cesar A. Perales, along with a team of planners from the Department of State and private sector experts, with support from Empire State Development, the Division of Homes and Community Renewal, and other state agencies.

Each Regional Council weighed seven criteria in selecting their nominee:

1. The targeted neighborhood should be compact and well-defined.
2. The downtown, or its center, should be of a size sufficient to support an active, year-round downtown and should have a sizeable existing or increasing population within easy reach for whom this would be the primary downtown.
3. The downtown should capitalize on prior, and catalyze future, private and public investment in the neighborhood and surrounding areas.
4. There should be recent or impending job growth within, or in close proximity to the downtown that can attract workers to the downtown, support redevelopment and make growth sustainable
5. The downtown must contain properties or characteristics that contribute or that could contribute, if enhanced, to the attractiveness and livability of the downtown, including the presence of developable mixed-use spaces, housing at different levels of affordability and type, commercial and retail main street businesses, including healthy and affordable food markets, walkability and bikeability, and public parks and gathering spaces
6. The downtown should contain or articulate how it can create policies that enhance quality of life, including the use of local land banks, modern zoning codes, complete streets plans, or transit-oriented development; and
7. Local and community support must exist for revitalization of the downtown. There must be a commitment among local leaders and stakeholders to build and implement a strategic investment plan for the downtown.

Empire State Development President, CEO & Commissioner Howard Zemsky said, "Governor Cuomo’s community-driven initiative has allowed New York’s regional councils to focus on creating new business opportunities to spur job creation and build stronger communities across the state. This investment will help Oneonta reach its greatest potential by bringing new life to one of the Mohawk Valley’s key urban centers. State and local officials will collaborate to leverage the region’s assets, build a bustling downtown, and show everyone that Oneonta is an outstanding place to live and work.”

Commissioner of New York State Homes and Community Renewal James S. Rubin said, “The Downtown Revitalization Initiative is another example of Governor Cuomo’s innovative approach to economic development.By building on existing assets, including high-quality housing that incorporates retail and other conveniences for people at a variety of income levels, we will help downtowns reach their full potential as attractive, affordable places to live and work. Congratulations to the 10 communities that put their best foot forward to win this funding. I look forward to seeing the results.”

Chair of the Downtown Revitalization Initiative Cesar A. Perales said, “It was a pleasure working with all of the Regional Economic Development Councils throughout this community-driven process. The REDC members had a very difficult task in making their selections among the many strong candidates in each region. My thanks to the REDCs and my congratulations to the winning communities.”

Round VI of the REDC initiative will award more than $750 million in state funding and tax incentives. In 2016, all 10 REDCs will be competing for a designation as a Top Performer. Five Top Performers will be selected and will receive up to $25 million in Empire State Development Capital Grant funding, with the remaining five regions receiving up to $10 million. Additionally, each region will be eligible for up to $15 million in Excelsior Tax Credits to help attract and grow businesses in the region.

Regional Council priorities in 2016 include:

By incentivizing the implementation of the strategic plans, Regional Councils, businesses, educational institutions, local governments, not-for-profit groups and other stakeholders are further motivated to work together to accomplish the regional vision. While project funding will be awarded to all 10 Regional Councils through the 2016 CFA, the competition places emphasis on Regional Council performance and action to implement strategies. Encouraging genuine cooperation among the REDCs and representatives of the community is critical to achieving economic development success.

In addition to the $10 million available to the winning Downtown Revitalization Initiative communities, state agencies will be awarding priority points through the CFA to additional downtown revitalization projects designed to transform communities ripe for development into vibrant, thriving neighborhoods.

Additionally, potential applicants from regions that were awarded $500 million through last year’s Upstate Revitalization Initiative are encouraged to submit CFAs in Round VI, as all three regions are full participants in this year’s REDC competition.

The deadline for CFA submissions is Friday, July 29th at 4 p.m.

For applicants, the CFA is available at https://apps.cio.ny.gov/apps/cfa/; and the 2016 REDC Guidebook and list of available resources can be found at www.regionalcouncils.ny.gov.

State Senator James L. Seward said, “Economic development in the Mohawk Valley and across upstate has received a great deal of attention in recent years thanks to the shared commitment of Governor Cuomo and the legislature – and early returns on the state’s investment are promising. The City of Oneonta is a leader in our region’s economic resurgence and the Downtown Revitalization Initiative funding will enhance current projects while significantly bolstering future growth. This award is a critical investment in Oneonta's future, and I look forward to seeing even more new businesses and jobs in downtown Oneonta and throughout the region.”

Assemblyman Bill Magee said, "Downtown Oneonta is a vibrant community, fortified by the educational resources of SUNY Oneonta and Hartwick College and a thriving business district. The investment from the Downtown Revitalization Initiative will help to create jobs, attract new businesses and further develop existing industries. I am grateful to Governor Cuomo and the Regional Economic Development Council for recognizing all of the hard work we have done in Oneonta so far, and equipping us with the resources to do even more."​

Mayor Gary Herzig said, "The importance of this award to City of Oneonta cannot be overstated. Governor Cuomo’s commitment to revitalize the economy of upstate New York will have a real impact on the lives of the people of this City and this Region. I wish to thank Governor Cuomo and the Mohawk Valley Regional Economic Development Council for investing in the future of the City of Oneonta and look forward to working together to make downtown Oneonta a true center of innovation where people of diverse backgrounds can live, work, and play together while enjoying an unparalleled quality of life.​"