Governor Andrew M. Cuomo today announced that Niagara Falls' Bridge District will receive $10 million in funding as the Western New York winner of the fourth round of the Downtown Revitalization Initiative. As in the first three rounds of the DRI, one municipality from each of the state's 10 regional economic development regions is selected as a $10 million winner, marking another overall state goal to target $100 million in funding and investments to help communities boost their economies by transforming downtowns into vibrant neighborhoods where the next generation of New Yorkers will want to live, work and raise a family.

"We challenged local governments through the DRI process to propose innovative ideas to create jobs and drive economic growth," Governor Cuomo said. "With this investment, we are doubling down on our commitment to revitalizing Western New York and building on the assets that exist in the Niagara Falls community to further maximize this world-famous area."

"As a Western New Yorker and frequent visitor to Niagara Falls, I know the city is not just an iconic tourist destination and home to one of the wonders of the world - it is a community on the rise with great civic and cultural strengths," said Lieutenant Governor Kathy Hochul, who attended today's event. "With funding from the Downtown Revitalization Initiative, Niagara Falls will be able to build on recent state investments and historic progress to create an even brighter future."

Niagara Falls' Bridge District centers on a Main Street corridor containing prominent civic and cultural assets and regional transportation amenities proximate to the natural attractions of De Veaux Woods State Park and the Niagara Gorge. In recent years, the construction of The Niagara Falls International Train Station and Intermodal Transportation Center and development of the plan to remove the Robert Moses Parkway and restore ecosystems along the reclaimed Niagara Gorge have laid the groundwork for enhanced connectivity between these core components. The DRI plan will identify key investments in public spaces, signature design projects, and strategic support of private projects to continue to bridge the divide, sown by urban renewal, between Main Street and the Niagara Gorge by fostering connections between community assets, a sense of place, and residential options for a diverse population. Niagara Falls is eager to ensure that investment will deliver on the principles of good urbanism to create a welcoming gateway district for visitors, a sought-after area for commercial activity and employment, and a desirable neighborhood in which to make a home.

The Western New York Regional Economic Development Council went through a competitive review process of proposals from communities throughout the region and considered all seven criteria below before recommending Niagara Falls as its nominee for winner:

With this investment, we are doubling down on our commitment to revitalizing Western New York and building on the assets that exist in the Niagara Falls community to further maximize this world-famous area.

Empire State Development President, CEO and Commissioner Howard Zemsky said, "Governor Cuomo has led the way in transforming downtown Niagara Falls and the Downtown Revitalization Initiative will help to take that even further, by realizing the potential of the city's historic Bridge District as a destination for residents, businesses and visitors along the Niagara Gorge."

New York Secretary of State Rossana Rosado said, "Thanks to Governor Cuomo's Downtown Revitalization Initiative, Niagara Falls will see positive growth and development in what is truly a landmark community. I congratulate the City and all of its leaders for working together to put forth a plan that shows how to make the most of this important investment."

New York State Homes and Community Renewal Commissioner RuthAnne Visnauskas said, "Niagara Falls continues to benefit from Governor Cuomo's targeted economic development programs, including a $28 million investment in affordable housing for the city that also leveraged an additional $62 million in private resources. This hard-earned and well-deserved $10 million award through the Downtown Revitalization Initiative will generate even more positive momentum for the city."

Senator Robert Ortt said, "This $10 million investment into the Niagara Falls Bridge District is welcomed news and will benefit both the residents of Niagara Falls and visitors of the city. The Downtown Revitalization Initiative will assist the city in planning and implementation of key projects that will return Main Street to a vibrant business district."

Assembly Member Angelo Morinello said, "Niagara Falls' Bridge District exhibits so much potential and I'm pleased that Governor Cuomo and the WNYREDC recognizes its many assets and will partner on the neighborhood's transformation. I look forward to being part of the DRI process with the community as we develop an investment plan and implement catalytic projects that will begin a new chapter in the Bridge District's revitalization."

Western New York Regional Economic Development Council Co-Chair and SolEpoxy President Jeff Belt said, "The selection of Niagara Falls' Bridge District as a DRI winner will transform this city's 'original downtown' as the next step in its broader revitalization. The DRI funds will leverage the state's investment in implementing smart growth policies that are building on the area's world-renowned waterfront and creating a new sense of place for the people who visit, live and work in Niagara Falls." 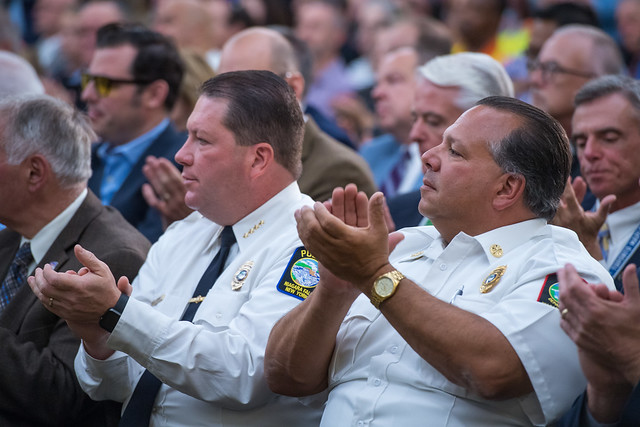 City of Niagara Falls Mayor Paul Dyster said, "One only need to take a look around to recognize Governor Cuomo's commitment to the City of Niagara Falls. From the removal of the Robert Moses Parkway to the expansion of our parkland and beyond, the Governor's series of strategic public sector investments have served as a trigger for many positive developments taking place in our city - including unprecedented investment from our partners in the private sector within our Main Street Business District. Today's transformative announcement and the Governor's unwavering recognition that we move further and faster together have helped to tell the story of a future that is just starting to unfold here in the City of Niagara Falls, one that we are confident will yield so much more in the months and years to come."

Niagara County Legislative Chair Keith McNall said, "Niagara Falls is the heart of our County and we are proud to see it recognized through Governor Cuomo's Downtown Revitalization Initiative. The Governor and the Western New York Regional Economic Development Council understand that our urban centers need targeted investments to meet the needs of the next generation of New Yorkers. I look forward to seeing Niagara Falls develop the projects that will usher in a new era for the entire region."

Niagara Falls will now begin the process of developing a Strategic Investment Plan to revitalize its downtown with up to $300,000 in planning funds from the $10 million DRI grant. A local planning committee made up of municipal representatives, community leaders, and other stakeholders will lead the effort, supported by a team of private sector experts and state planners. The Strategic Investment Plan for downtown Niagara Falls will examine local assets and opportunities and identify economic development, transportation, housing, and community projects that align with the community's vision for downtown revitalization and that are poised for implementation. The downtown Niagara Falls Strategic Investment Plan will guide the investment of DRI grant funds in revitalization projects that will advance the community's vision for its downtown and that can leverage and expand upon the state's $10 million investment. Plans for the DRI's fourth round will be complete in 2020.