Governor Andrew M. Cuomo today announced that New York's Major League Baseball teams, the New York Mets and New York Yankees, can resume play with spectators in the stadiums, beginning April 1. Professional sports in large outdoor stadiums that hold 10,000 people or more will be allowed to reopen at 20 percent capacity. Attendees must show proof of a recent negative test or completed vaccination series prior to entry and are subject to strict state guidance on face coverings, social distancing, and health screening. The New York State Department of Health will re-evaluate the testing and vaccination entry requirements in May, and if the public health situation continues to improve, they may be discontinued in mid-May. Vaccinations will continue to be administered at Yankee Stadium and Citi Field during the MLB season.

Building on the recent reopening of large professional sports arenas, the Governor also announced that smaller, regional sports venues that hold 1,500 people indoors or 2,500 people outdoors can also reopen, beginning April 1. Initial capacity will be limited to 10 percent indoors and 20 percent outdoors. Attendees must show proof of a recent negative test or completed vaccination series prior to entry and are subject to strict state guidance on face coverings, social distancing, and health screening.

Governor Cuomo also announced that large outdoor performing arts venues, including stadiums, that hold more than 2,500 people can reopen at 20 percent capacity, beginning April 1. Venue capacity will continue to increase as the public health situation improves with more New Yorkers receiving vaccinations and fewer COVID-19 cases in the community. Attendees must show proof of a recent negative test or completed vaccination series prior to entry and are subject to strict state guidance on face coverings, social distancing, and health screening.

"New Yorkers love to root for the home team, and it was especially difficult to see great professional sports teams close down as we implemented restrictions necessary to protect the public health," Governor Cuomo said. "As New York's COVID situation improves, we're giving New Yorkers the opportunity to cheer on the Yankees and Mets in person as long as they stay safe. I look forward to seeing our beloved teams open Citi Field and Yankee Stadium again as we continue to recover from this pandemic."

As New York's COVID situation improves, we're giving New Yorkers the opportunity to cheer on the Yankees and Mets in person as long as they stay safe.

To re-open professional sports with spectators at large outdoor stadiums, each venue must adhere to strict health and safety protocols, including:

"We're really excited about the season ahead and welcoming the best fans in baseball back - safely - to Citi Field," Mets Owner, Chairman and CEO Steve Cohen said. "We thank Governor Cuomo and the state's Department of Health for their efforts in this significant step in New York's recovery from COVID and look forward to continuing to work with them as capacity restrictions and testing requirements hopefully ease in the months ahead - to allow as many fans as possible to have a safe and great time with us." 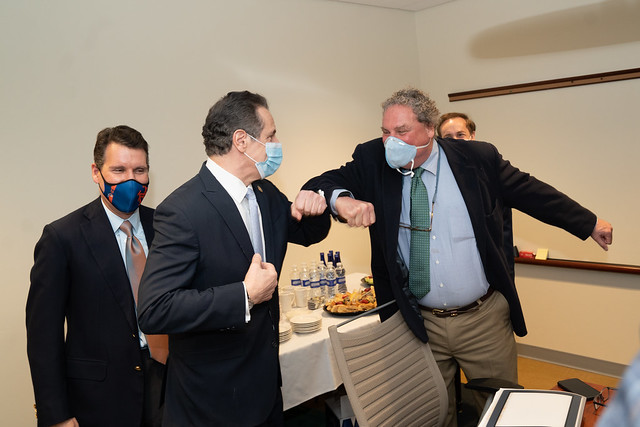 "The entire Yankees organization — and especially our players on the field — feed off the energy that our loyal and dedicated fans bring to Yankee Stadium," said Yankees Managing General Partner Hal Steinbrenner. "Our fans have made our home a preeminent worldwide attraction, and their excitement is the catalyst for the championship goals we set every season. We are thrilled to be able to have them back in 2021 and promise them the highest standards for health and safety this season and beyond. We are heartened by the Governor's decision to allow us to begin the season at Yankee Stadium with a 20% capacity and offer our deep appreciation for his office's diligent work and guidance. This will be a very special year in the Bronx, and we will continue to work together with the State of New York, Mayor Bill de Blasio and the City of New York, Major League Baseball, and other health and safety experts to utilize the best and most responsible practices in our facility. We are fully committed to providing a world-class experience at Yankee Stadium in every respect."

On February 10, Governor Cuomo announced that, building off the successful Buffalo Bills pilot program, sports and entertainment events in major stadiums and arenas with a capacity of 10,000 or more people can re-open with limited spectators, beginning February 23. Today's announcement reflects an increased capacity limit from 10 to 20 percent for large outdoor venues which may host professional sporting events or live entertainment, starting April 1.