Islanders Will Play All 2020-21 Season Home Games At Nassau Coliseum, Along With Any Playoff Games This Season and Next

Governor Andrew M. Cuomo today announced the New York Islanders will return to Long Island full-time one year ahead of schedule, with all home games during the upcoming 2020-21 season played at NYCB Live, Home of the Nassau Veteran's Memorial Coliseum. Additionally, the Islanders will play any home playoff games this season and next season at the Coliseum. The team is able to play at the Coliseum as a result of $6 million in state-funded upgrades to the building's infrastructure. Tickets for potential 2019-20 home playoff games and 2020-21 regular season games at the Coliseum will go on sale starting today. This announcement comes as construction on the Islanders' new permanent home at Belmont Park continues to move forward, with the team's arena on track for completion for the 2021-22 NHL season.

"The Islanders have always been Long Island's team, and I'm proud to announce this iconic sports franchise will be coming home for good - one year ahead of schedule," Governor Cuomo said. "This long-awaited homecoming will bring the Islanders back to their passionate fan base while generating energy and excitement from Long Islanders for the new Belmont Park Arena opening next year."

Co-Owner of the New York Islanders Jon Ledecky said, "We are looking forward to playing all of our games next season at the Coliseum before we move to our new home at Belmont Park, both of which have been made possible by Governor Cuomo and Commissioner Bettman."

NHL Commissioner Gary Bettman said, "As the National Hockey League looks forward to the Islanders' move to Belmont Park Arena for the 2021-22 NHL season, thanks to the state's investment and upgrades to the facility and the commitment of Islanders ownership, we have now determined that the best option during this period of transition is for the Club to play all of its regular-season home games next season and any home Stanley Cup Playoff games this and next season at Nassau Coliseum at NYCB Live. We thank Barclays Center for playing host to the Islanders over the past five years and thank Islanders fans for their patience and loyalty while the League and the Club work together with the State of New York to build the new home this proud franchise needs and deserves."

Today's announcement is the culmination of years of work by Governor Cuomo, the Islanders, and the National Hockey League, resulting in the Islanders returning home to Long Island full-time in October 2020. The team will now play any home playoff games this season and next at the Nassau Coliseum, along with all 41 home games during the 2020-21 season.

This long-awaited homecoming will bring the Islanders back to their passionate fan base while generating energy and excitement from Long Islanders for the new Belmont Park Arena opening next year.

In December 2017, Governor Cuomo announced that the Islanders would build a new arena at Belmont Park and return to Long Island full-time for the 2021-22 NHL season, and since then the State has worked to accelerate the Islanders' homecoming. Those efforts first came to fruition in early 2018, when the Governor announced that the team would play a dozen games at the Nassau Coliseum during the 2018-19 season. Six months later, eight additional home games at the Coliseum were added, reflecting the high demand for the original twelve Coliseum games. Governor Cuomo further expanded on those efforts in September 2019, when he announced at the Belmont Park Arena groundbreaking that the team would play 28 games — or 68% of all home games — at the Coliseum during the 2019-20 season.

The news of the Islanders' full-time return to Long Island comes as construction on the new Belmont Park Arena continues at a brisk pace. To date, more than 330,000 cubic yards of soil have been excavated from the site, the entire 15,000 cubic yard concrete foundation has been poured, and approximately 20% of the project's structural steel beams have been installed. In addition, PSEG Long Island has made steady progress on upgrading Belmont Park's electrical infrastructure to support the new development and the Long Island Rail Road has commenced design work on the new Elmont Station, which will be primarily funded by the arena developer through a public-private partnership and is the first new, full-time LIRR commuter station built in decades. 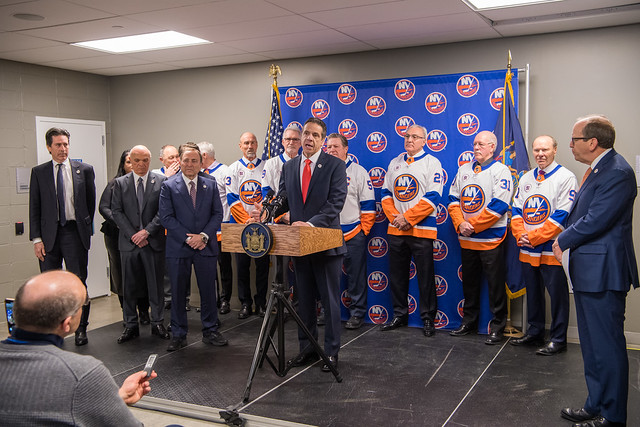 Empire State Development Acting Commissioner and President & CEO-Designate Eric Gertler said, "The Islanders have been an integral part of Long Island since 1972, and I am thrilled to see this franchise return home — both as the head of New York's economic development agency and as a lifelong hockey fan. Thanks to Governor Cuomo's vision and leadership, the Islanders are building a state-of-the-art, permanent home on Long Island, while generating thousands of jobs and billions in economic development, and today's announcement further supports those efforts."

The privately funded $1.3 billion Belmont Redevelopment Project will construct a 250-room hotel and 350,000 square foot retail village in addition to a 19,000-seat arena for the Islanders and other events. The project is expected to create 10,000 construction jobs and support 3,200 full-time jobs upon completion. In addition, the construction activities are projected to generate an economic impact of $2.7 billion, while the operations of the new arena, hotel, and retail village are expected to generate annual economic impacts of $858 million.

Islanders fans can reserve tickets for potential 2019-2020 home playoff games and purchase tickets for 2020-21 home games at the Coliseum here.