View Before and After Photos Here

Governor Andrew M. Cuomo today announced the opening of New Hyde Park Road to vehicular traffic as the elimination and reconstruction of the New Hyde Park railroad crossing has been completed on budget and two months ahead of schedule. This is the latest step in the broader Long Island Railroad Expansion Project that will add a third track from Floral Park to Hicksville to reduce train congestion and delays. The grade crossing, located in the villages of New Hyde Park and Garden City, is the third of eight street-level crossings along the LIRR Main Line eliminated as part of the LIRR Expansion Project from Floral Park to Hicksville.

"The New Hyde Park Road grade crossing has been a traffic nightmare for decades, and fixing it was easier said than done. I'm proud to say we've just opened the new grade crossing on budget and two months ahead of schedule," Governor Cuomo said. "With one more crossing eliminated, we are looking forward to fewer delays for LIRR and a transit network that can support a 21st century economy for Long Island and New York."

Janno Lieber, President of MTA Construction & Development, said, "Finishing a huge upgrade like this one ahead of schedule demonstrates how the MTA is delivering projects faster, better and cheaper than ever before. Under Governor Cuomo's leadership we have undertaken over 100 LIRR Projects across Long Island, and they have remained on track right through the COVID-19 crisis."

Phillip Eng, President of MTA Long Island Rail Road, said, "The elimination of the New Hyde Park Road grade crossing has enhanced safety and reliability for all those that use New Hyde Park Road. This project improves our operations, reduces traffic congestion and improves the environment through the elimination of these crossing gates. This along with our industry leading efforts to improve grade crossing safety through the use of reflectorized delineators and our collaboration with Waze demonstrates our commitment to improving the quality of life for all Long Islanders. I'm proud of our workforce as they continue to step up and deliver during these unprecedented times."

With one more crossing eliminated, we are looking forward to fewer delays for LIRR and a transit network that can support a 21st century economy for Long Island and New York.

The grade crossing was closed to vehicular traffic and pedestrians on Feb. 3. Over the past several months, crews installed soldier piles, excavated soil to depress the roadway under the tracks, and built the new 3,350-ton railroad bridge and tunnel structure on the south side of the tracks.

During a double-track outage from July 11-12, MTA Construction & Development, MTA Long Island Rail Road and design-build contractor 3TC removed the existing rail infrastructure to allow for excavation which was followed by the installation of the new 75-foot, three-bay bridge. The innovative bridge installation methods on this design build project using hydraulics to push the bridge in place over a single weekend, first used for the Urban Avenue grade separation, was the first such use in North America.  It was the second major milestone in two weeks for the LIRR Expansion Project following the roll-in of the LIRR's Glen Cove Road Bridge, 3.4 miles to the east in Carle Place.

The LIRR Expansion Project will add a third track from Floral Park to Hicksville, reducing train congestion and delays and enabling true bi-directional service during peak hours. This transformative work includes several related projects, including the construction of additional parking garages and improved station access, retaining and sound attenuation walls, improvements to rail bridges and the removal of the eight street-level railroad crossings in the corridor. Construction is being handled in a way to minimize the impact on daily routines, with extensive mitigation and public outreach efforts to local communities. 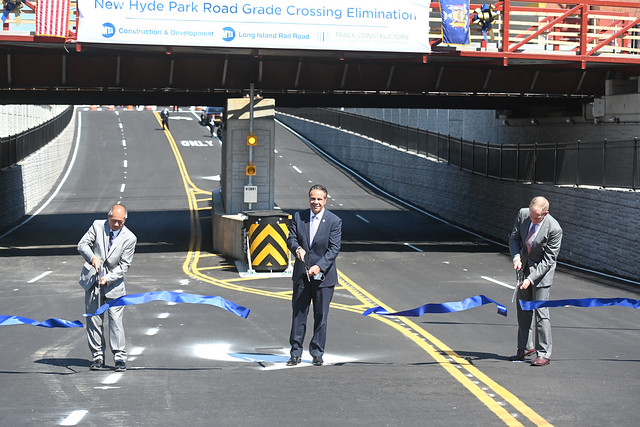 The LIRR Expansion Project is part of a multibillion-dollar modernization of the Long Island Railroad, the largest investment the railroad has received in decades. Once the work is complete, the LIRR will have improved safety, capacity and redundancy with a third track through this corridor improving service, reliability and increased operational flexibility to support reverse commutes and changing travel patterns as businesses and Long Islanders reimagine their work practices and travel patterns. For more information about the project visit https://www.amodernli.com/project/thirdtrack/.

Senator Anna M. Kaplan said, "Even with the challenges posed by the coronavirus pandemic, the LIRR third track expansion project is continuing to hit important milestones on time and on budget. The elimination of the New Hyde Park grade crossing is a win-win for the community, enhancing safety and alleviating traffic in our community. I applaud the hard working men and women who worked tirelessly on this great achievement, and I thank Governor Cuomo for setting an ambitious agenda to improve the MTA and modernize the Long Island Railroad."

Assemblyman Ed Ra said, "The re-opening of New Hyde Park Road is a major milestone for this project. I thank Villages of Garden City and New Hyde Park and the 3TC team for their coordination in minimizing the disruption during construction and look forward to restored access to this major thoroughfare as our local businesses and schools are re-opening from the COVID-19 pandemic."

Nassau County Executive Laura Curran said, "The completion of the New Hyde Park overpass is another major milestone met for the LIRR Expansion Project, a landmark reached regardless of the many unforeseen obstacles we've encountered this year. The third track project will play a big role in supporting transit-oriented development throughout Nassau County which is key to helping to grow our communities for generations to come."