Directs Up To $340,000 to Town Of Ramapo to Install License Plate Readers In and Around Monsey

Governor Andrew M. Cuomo today announced new funding to harden security infrastructure and further protect communities in and around the community of Monsey, where a man attacked a home full of Jewish worshipers on the seventh night of Hanukkah on Dec. 28, 2019.

The Governor is directing $340,000 for the village of New Square to install license plate reader technology, which was used to catch the Monsey attacker, as well as other security cameras. The Governor is directing up to $340,000 to the Town of Ramapo to install the same technology on roads in and around Monsey. The expanded New York State Hate Crimes Task Force, which the Governor announced during his 2020 State of the State address, will evaluate requests from other municipalities for license plate readers.

"The hate-fueled attack in Monsey wasn't just repugnant to our values of inclusion and diversity - it was also illegal," Governor Cuomo said. "We have zero tolerance for the cowards who perpetrate these vile acts of hate and will use every tool at our disposal to hold them accountable. This new technology will enhance security in vulnerable communities and serve as a deterrent for future attackers."

This technology automatically captures all license plate numbers that come into view, along with the location, date, and time. The data, which includes photographs of the vehicle, is then uploaded to a central server and relayed to police agencies across a wide area. The expanded Hate Crimes Task Force will evaluate requests from other municipalities for similar technology.

Today's announcement builds on the Governor's actions to combat hate incidents. At last week's "No Hate No Fear" Solidarity March, Governor Cuomo announced an additional $45 million in funding is available to help protect New York's religious-based institutions, including non-public schools and cultural centers, against hate crimes. Funding is being made available through Requests for Applications under New York's Securing Communities Against Hate Crimes Grant Program. Since the program's inception, more than 500 such projects have been supported by $25 million in state funding. The Governor announced the creation of a new tip line that New Yorkers should call if they experience bias or discrimination - 1-877-NO-HATE-NY. Additionally, the Governor announced State Police will continue increased patrols and security in Orthodox Jewish neighborhoods across the state.

At last week's State of the State address, Governor Cuomo asked the Legislature to approve the nation's first domestic terrorism law. This new law will treat hate for what it is - domestic terrorism - strengthening the punishment for mass violence motivated by hate. He also announced the State is working to make sure New York schools educate young people about diversity and how it makes the state and nation stronger and more resilient. 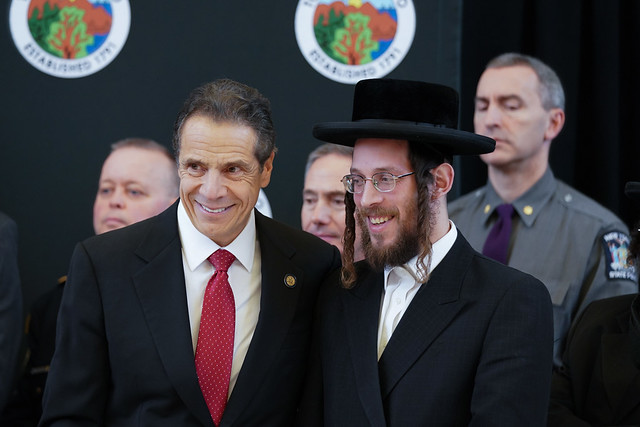 Senator David Carlucci said, "Every resident in Rockland County deserves to feel safe. Following the horrific Monsey attack, targeting our Hasidic community, it was critical we take immediate action and support funding for increased security measures and strengthen our domestic terrorism law. I thank the Governor for hearing the concerns of our community, and I look forward to working with him to classify hate motivated mass violence as domestic terrorism."

Town of Ramapo Supervisor Michael Specht said, "I am overjoyed and appreciative of the Governor's support. Governor Cuomo not only promised but immediately came through with the financial help needed to keep the Town of Ramapo one of the safest in our nation. A heartfelt thanks to Governor Cuomo - a man of his word."

Mayor of New Square Israel Spitzer said, "This critical funding will ensure that New Square has the latest security technology in place to protect residents from acts of hate. I want to thank the Governor for his proactive approach to combatting hate crimes. We must follow the Governor's example and stand up for the most vulnerable members of our community."

Rabbi Chaim L. Rottenberg, Congregation Netzach Yisroel, said, "The Governor was with us the day of the attack and he is with us now, providing extra funding for security measures to ensure that we are safe in the future, not just in words but in action. I appreciate the Governor's commitment to the physical and spiritual welfare of the Jewish community and all New Yorkers. Thank you Governor."

Steve Gold, Co President Jewish Federation and Foundation of Rockland said, "We are very appreciative that the state is committing funding for license plate readers that will benefit Town of Ramapo residents and all travelers through the area. This is a significant step toward improving safety for everyone in Rockland County."

Rabbi Hersh Horowitz, Executive Director of the Community Outreach Center, said, "This latest action to fund security cameras and license plate readers in and around Monsey will further bolster the security the Governor has already put in place to keep people here safe. We appreciate the Governor's commitment to protecting the Rockland Jewish community from anti-Semitism."