Governor Andrew M. Cuomo today announced DICK’S Sporting Goods, Inc., the nation’s leading sports and fitness retailer, will invest $100 million to build a regional distribution facility at the Broome County Corporate Park in the Town of Conklin. DICK’S investment is creating 466 full-time jobs over the next five years in the Southern Tier. Construction on the 650,000-square-foot facility will begin next month and is scheduled for completion in early 2018. The new DICK’S distribution center strengthens the company's roots in Binghamton, where it was founded seven decades ago, and is aligned with Southern Tier Soaring – the region’s comprehensive blueprint for economic growth.

“From our Regional Economic Development Councils to the Upstate Revitalization Initiative, we are laying the groundwork for regions across the state to transform their communities into local economic engines,” Governor Cuomo said. “The new DICK’S distribution center is proof positive that our strategy of capitalizing on regional assets to attract top-level private investment and leverage job growth is working right here in the Southern Tier. Today’s announcement demonstrates the progress that has been made in changing the trajectory of New York’s business climate and we will continue to invest in this region’s assets to attract businesses and generate economic opportunity for generations to come.”

DICK’S Sporting Goods Chairman and CEO Edward W. Stack said: “We are extremely pleased to announce our plan to build and operate a distribution center in Greater Binghamton, further strengthening our deep roots in this community. We started the company here and ultimately chose Conklin for the business-friendly environment, the quality and reliability of the workforce and the opportunity to bring jobs to our hometown.”

Attracting top-level private investment to the Southern Tier is a central component of Southern Tier Soaring, the region’s comprehensive blueprint to generate robust economic growth and community development. The State has already invested more than $3.1 billion in the region since 2012 to support the plan – attracting a talented workforce, growing businesses and creating new jobs.

DICK’S new regional distribution facility in Broome County will be its fifth nationally. The center will be located on an approximately 123-acre site in the Broome Corporate Park and will service over 200 retail locations throughout the Northeast. Along with construction of the facility, related site work will include wetland mitigation, grading and clearing, and extension of utilities. Additionally, DICK’S is pursuing LEED certification for the facility with plans to incorporate sustainable components such as high efficiency lighting and HVAC, recycled and environmentally-friendly construction materials, energy management systems and recycling programs for corrugate and plastics.

DICK’S Sporting Goods new Conklin distribution facility will create 466 full-time jobs over the next five years in the Southern Tier.

"Today’s announcement demonstrates the progress that's been made in changing the trajectory of NY's business climate...we will continue to invest in this region’s assets...and generate economic opportunity for generations to come." Governor Cuomo

“We are extremely pleased to announce our plan to build and operate a distribution center in Greater Binghamton, further strengthening our deep roots in this community." DICK’S Sporting Goods Chairman, CEO Edward W. Stack
WYSIWYG

DICK'S expansion in the Southern Tier strengthens its roots following the company's founding in 1948 by the Stack family. Richard 'Dick' Stack started with a $300 loan from his grandmother’s cookie jar. Using that money, Dick opened a bait-and-tackle shop on Court Street in Binghamton. By 1958, he had expanded the product line to include much of what is in the more than 645 DICK’S Sporting Goods stores across the nation today.

Empire State Development President, CEO & Commissioner Howard Zemsky said, "Today's announcement is further proof of the tangible success of the Southern Tier region's strategic plan to attract private sector investment and leverage it into economic growth. DICK'S latest expansion will bring more than 450 new jobs back to its hometown of Binghamton and it's a prime example of what we can achieve when we work closely with regional partners to achieve real results."‎

The new DICK’S distribution center is proof positive that our strategy of capitalizing on regional assets to attract top-level private investment and leverage job growth is working right here in the Southern Tier.

The State and Broome County together have offered a competitive incentive package as part of their efforts to attract DICK’S Sporting Goods’ major distribution facility, and create than 466 new jobs, for the Southern Tier region. New York State’s performance-based incentives are valued at up to $12 million, including funds from the region’s Upstate Revitalization Initiative and Excelsior Jobs Program tax credits. Additionally, the Broome County Industrial Development Agency is slated to approve tax abatements in the immediate future.

Broome County Executive Debbie Preston said: “I am pleased that DICK’S is coming back to continue its legacy and strengthen its roots right here in the Southern Tier. This decision sends the strong message that Broome County is a great place to do business and is yet another exciting chapter in our regions’ economic narrative. I thank the Governor and for his vision and for his commitment to generating economic growth in our community and look forward to our progress in years to come.” 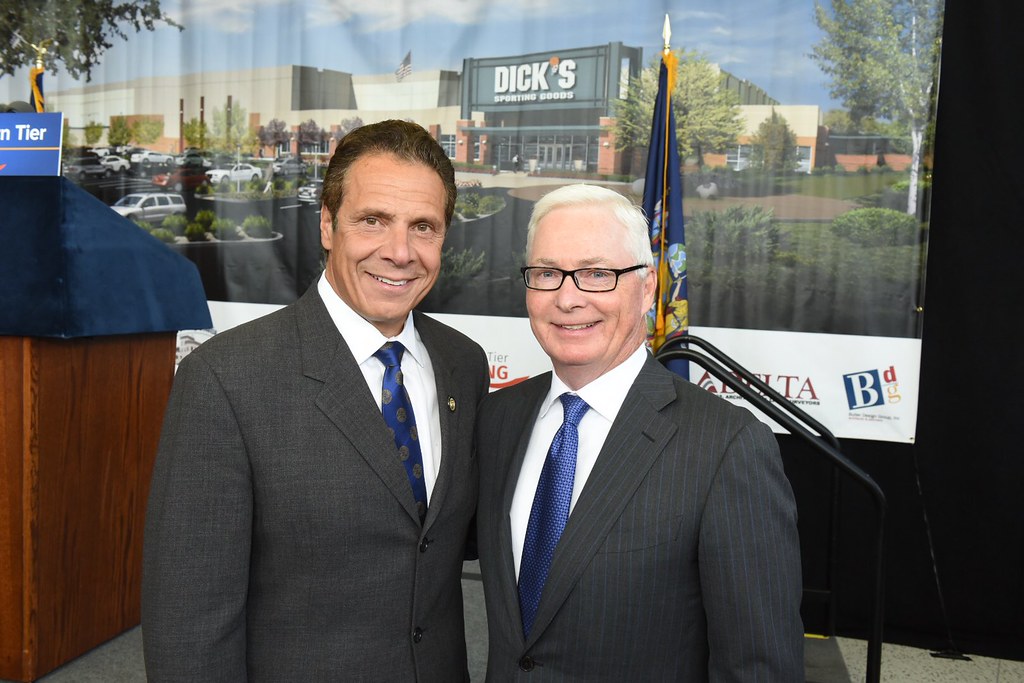 Broome County Industrial Development Agency Executive Director Kevin McLaughlin said: “This is a tremendous project for Broome County, and one that was not easy to put together. We had a lot of site challenges and numerous hurdles to jump. The collaboration between our office, New York State, the DEC, the Army Corp of Engineers, Broome County, the Town of Conklin and Delta Engineers was amazing and the commitment by DICK’S Sporting Goods and JLL to make this project work kept us moving forward. We are thrilled that the day is finally here to announce DICK’S return to Broome County.”

Additionally, NYSEG is committing up to $540,000 in economic development grant assistance for electric and natural gas infrastructure and energy efficiency improvements.

Mark S. Lynch, president and CEO of NYSEG and RG&E said: “We are pleased to add our support for DICK’S Sporting Goods’ further investment in Broome County and the Southern Tier. Economic development grants from NYSEG strengthen the economy by helping new or expanding business. Our contribution to this effort is especially gratifying because of the significant investment and new jobs it will bring to the region. We congratulate DICK’S Sporting Goods and wish the company continued success.”

Senator Fred Akshar said: “Dick’s Sporting Goods was a key component of the Southern Tier economy for so many years and today, we are ensuring that legacy continues. With 466 jobs coming here, this new distribution facility is the economic jumpstart that our region welcomes with open arms. I thank Governor Cuomo for his efforts in making this a reality."

Assemblywoman Donna Lupardo said: "With hundreds of stores across the country, it's fitting that this new facility be based right here in the Southern Tier where Dick's Sporting Good's first store opened. The creation of over 450 new jobs is welcome news for our local economy, adding momentum to the work being done throughout the region. I thank Governor Cuomo for all he has done to make this day possible and look forward to our continued partnership to helping our economy thrive once again.”