Governor Andrew M. Cuomo today announced he will lay out in his 2020 State of the State address an aggressive nation-leading initiative to restock and restore aquatic habitats throughout the state. The Governor previewed the program - called the "Revive Mother Nature" Initiative - at an event in New York City's Hudson River Park with the release of a 275-pound gabion cage filled with thousands of juvenile shellfish to help restore four acres of the estuarine sanctuary off of the park, among the first of millions of oysters to be reintroduced.

"Our new aquatic habitat restoration initiative which includes major fish and oyster restoration efforts will be outlined in full at the State of the State in January and it will be a national first in that it will be the most aggressive and the most progressive statewide program in the country," Governor Cuomo said. "If we're waiting for the federal government to lead the way it is a fool's errand - New York is acting now to protect our environment and take care of our natural resources."

The new program will protect and restore wetlands and waterways and include significant investments in New York's 12 fish hatcheries to increase the state's populations of freshwater sportfish such as walleye, trout, and salmon and restore oysters in New York Harbor over the next decade and double the current shellfish restoration initiative on Long Island. There will be an education component to ensure visitors recognize New York as a world class fishing destination. Restoring the state's aquatic habitats will also help communities increase their resiliency in the face of climate change and severe weather.

To support Hudson River Park's Estuarine Sanctuary Management Plan and the state's extensive shellfish restoration initiative, the Governor also announced $2.8 million in funding to restore marine habitat in New York Harbor and support state efforts for it to continue to thrive and to expand the Soundview Park oyster reef in the Bronx River.

Today's announcement includes $1.5 million in capital funding to help create approximately four acres of enhanced habitat for 5 to 10 million oysters in the Hudson River Park's Estuarine Sanctuary. Additional, future habitat improvements may include the installation of reef balls, gabion baskets like the basket deployed by the Governor today, and mounds of recycled shells to create habitat corridors between piers, as well as encasing pilings with environmental concrete, wire mesh, and bio-huts seeded with oysters. The Park is already the largest site of oyster cages in New York City. In addition, the Park has separately piloted 12 oyster wraps around pilings in the Park's Pier 32 pile field. Teachers, students, and the community help to monitor 15 oyster research stations located in Park waters.

"If we're waiting for the federal government to lead the way it is a fool's errand - New York is acting now to protect our environment and take care of our natural resources."

The Soundview project is led by a consortium of partners, including The New York Harbor Foundation, New York Harbor School, the Billion Oyster Project, the Hudson River Foundation, NY/NJ Baykeeper, Rocking the Boat, NYC Parks, and Bronx River Alliance. In addition, the project offers a unique opportunity to surrounding schools and the community to participate in authentic, hands-on citizen science events centered on oyster restoration that will be conducted throughout the next five years. Not only will this program potentially introduce thousands of students to the local marine environment in a meaningful way, it will create pathways to high-paying and rewarding careers in marine science, technology, and engineering.

"We are committed to restoring New York's marine and freshwater habitats as part of our efforts to improve and protect water quality," said Lieutenant Governor Kathy Hochul. "This nation-leading initiative will help to ensure the long-term quality of wetlands and waterways and increase the populations of freshwater fish. Restoring the state's aquatic habitats complements our goal to increase resiliency, combat climate change, and advance New York as a world-class destination for fishing and tourism."

With significant state investments including $50 million in the 2018-19 state budget, the Hudson River Park has transformed the west side of Manhattan and increased public access to the waterfront's abundant natural resources. The Park, the longest riverfront park in the country, contains a 400-acre Estuarine Sanctuary that is supported by a multi-faceted management plan to preserve and enhance its aquatic habitat and promote awareness and stewardship of the estuarine environment for the millions of New Yorkers who enjoy annually. New York State continues to work with the Hudson River Park Trust and its partners in ensuring the Estuarine Sanctuary Management Plan is complete and the marine sanctuary is protected. The management plan is currently being updated to reflect the significant progress being made with initiatives like the shellfish restoration program and its ultimate goal to plant millions of additional oysters in 50 acres of the sanctuary by 2030.

In addition, approximately $1.4 million from the state's Environmental Protection Fund will support the Billion Oyster Project's Soundview Park oyster habitat restoration at the mouth of the Bronx River. The current reef, New York City's largest, would be expanded to five acres when fully completed. It will provide key environmental benefits including the filtering of up to 30 million gallons of water per day and offer significant storm resiliency protection for the surrounding area. The new shellfish to be deployed will join 30 million oysters already planted throughout the marine district by the Billion Oyster Project to date, including at the Governor Mario M. Cuomo Bridge. Already, these oysters have helped filter nearly 20 trillion gallons of water, removed 72,500 pounds of nitrogen to greatly improve overall water quality, and recycled 1.3 million pounds of shells to reduce waste and support new oyster growth. 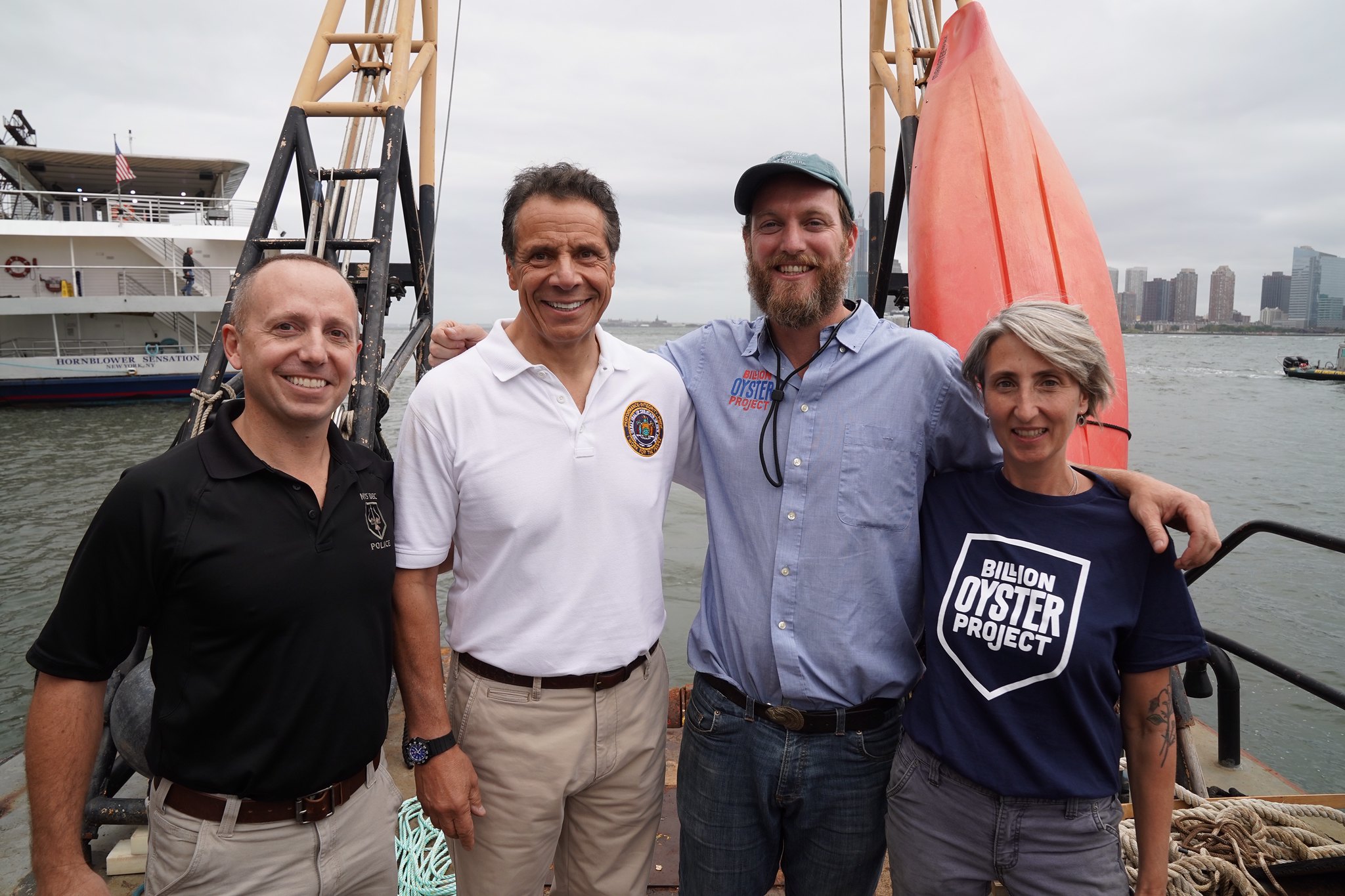 Department of Environmental Conservation (DEC) Commissioner Basil Seggos said, "New York's waters are teeming with life in ways that haven't been seen in decades, largely due to the wise and innovative environmental investments made by Governor Cuomo and our many partners in programs like those we are supporting today. Restoring New York's waterways and wetlands with fish and oysters is an effective way to provide communities across the state with the amazing benefits a healthy fish and shellfish population can provide, from filtering impurities from our waters, to providing additional resilience against the negative impacts of coastal storms."

State Parks Commissioner Erik Kulleseid said, "Restoring our aquatic habitats is more important than ever and thanks to Governor Cuomo is gaining greater public recognition. State parks and historic sites provide a habitat for many of the valuable and diverse plants, animals and species across the Empire State. Restoring these natural processes brings important environmental services to our parks and communities. It is important that we safeguard these diverse resources, so that they may continue to provide this valuable contribution to the ecosystem."

Madelyn Wils, President & CEO, Hudson River Park Trust, said, “We are grateful to Governor Cuomo for his extraordinary investment in rebuilding Hudson River Park and its 400-acre Estuarine Sanctuary, which provides such critical habitat for over 70 species of fish as well as oysters, mussels and so much more. The Governor’s leadership in jumpstarting oyster restoration and rebuilding marine habitat in Hudson River Park and throughout New York Harbor will have lasting ecological and community benefits that will be of value to the entire Hudson River watershed for years to come.”​

This funding and oyster deployment are the latest elements of the state's critical shellfish restoration efforts to restore marine habitat, improve water quality, increase coastal resiliency, and support local economies. The Governor's $10.4 million Long Island Shellfish Restoration Project (LISRP) is also underway to establish five shellfish sanctuary sites stocked with up to 179 million local-grown and harvested shellfish, juvenile and adult shellfish. LISRP is being led by DEC in collaboration with Cornell Cooperative Extension, Stony Brook University, municipalities and volunteer organizations and has already made significant progress in planting millions of juvenile and adult clams and oysters in one of the Long Island shellfish sanctuaries. They work to improve water quality, mitigate harmful algal blooms, restore native shellfish populations, increase biodiversity, and bolster resiliency in coastal communities. In addition, as part of the Governor's Vital Brooklyn initiative, $200,000 in state funding is helping to expanding the BOP's school-based curriculum, increasing opportunities for at-risk youth to learn about shoreline and habitat restoration efforts in the Jamaica Bay and exposing more than 9,500 students to oyster habitat restoration and the Staten Island Living Breakwaters Project.