All Piles – Totaling More Than 1,000 – Have Been Installed in Hudson River; Placement of Over 3,000 Roadway Panels Completed, Totaling 3.4 Miles

Governor Andrew M. Cuomo today announced the New NY Bridge has reached a major milestone with the topping off of the eight main span towers, and with the final concrete pour completed this week. The New NY Bridge is on track to open in 2018 and on budget at $3.98 billion. Additionally, 90 percent of support structures on the project are installed, including the fabrication and placement of 126 steel girders sections. To date, 3,000 roadway panels have been installed to connect the Rockland and Westchester shorelines up to the iconic main span, taking one of the largest active bridge projects in the nation one step closer to completion.

“Replacing the Tappan Zee Bridge with such a magnificent structure sends a powerful message to the world that nothing is too big or too difficult for the Empire State,” Governor Cuomo said. “This is one of the largest projects ever undertaken by the state of New York. With the topping off of the eight main span towers, we have reached a major milestone in our continued progress and are on schedule to open in 2018 and on budget. The new bridge will be built for the ages and strengthen our region’s infrastructure for generations to come.”

The New NY Bridge is one of the biggest active bridge projects in the nation and the largest in the history of the New York State Thruway Authority. In all, more than 6,300 people have contributed to the New NY Bridge project thus far, totaling more than 8 million hours of man power. At the Governor’s direction, the Thruway Authority has managed this project since 2013 with two fundamental objectives, to first open the bridge in 2018, and second, finish the bridge at or below the budgeted cost of $3.98 billion.

The New NY Bridge project is recognized across the nation for its iconic design, including by President Barrack Obama, who put the bridge at the top of his list of critical infrastructure priority projects. Once complete, the new bridge will connect Westchester and Rockland counties and serve as the main conduit between Upstate and the New York City metropolitan region.

“This is one of the largest projects ever undertaken by the state of New York...The new bridge will be built for the ages and strengthen our region’s infrastructure for generations to come.” 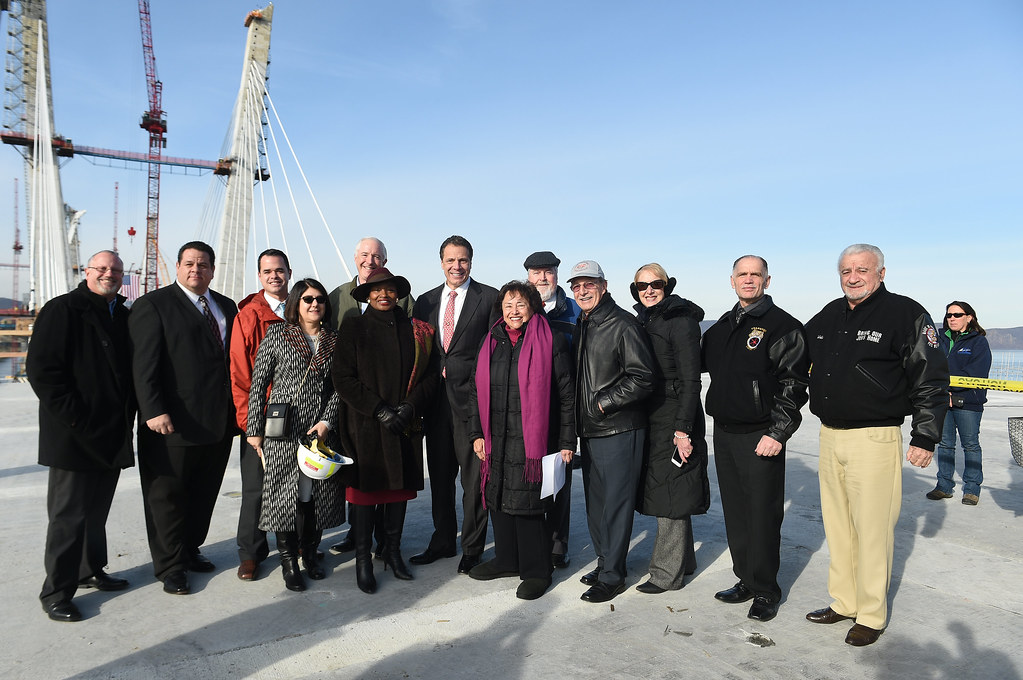 This project is using the design-build construction process which Governor Cuomo championed and brought to New York. The process incentivizes the private sector to be creative on approaches that speed construction time and reduce cost, while the state also gets the assurance of cost certainty. Tappan Zee Constructors is responsible for both the design and construction.

The twin-span crossing will replace the six-decade-old Tappan Zee Bridge, which is used by an average of 140,000 vehicles every day. The 3.1-mile bridge will include eight general traffic lanes, four breakdown and emergency lanes, space for future bus rapid transit and commuter rail, a bicycle and walking path with six unique viewing areas, cashless tolling, and energy efficient LED lighting. The state-of-the-art bridge will not require any major structural repairs for at least 100 years.

Thruway Authority Acting Executive Director Bill Finch said, “More than 50 million vehicles cross the Tappan Zee Bridge each year and the crossing serves as a vital connection for residents across the state. We thank Governor Cuomo for his commitment to building a new world-class bridge after so many starts and stops over the years. The New NY Bridge project has not only employed thousands of people in good-paying jobs across the state but it serves as a reminder that New York will always lead the nation when it comes to investing in its infrastructure and the future.”

New NY Bridge Project Director Jamey Barbas said, “The New NY Bridge project is an exceptional engineering marvel that continues New York’s legacy of building extraordinary transportation networks. The cable-stayed New NY Bridge is being built to last 100 years without needing major repairs and will include cutting-edge technology that will benefit commuters, businesses and the region into the next century.”

Tappan Zee Constructors President & Project Executive Terry Towle said, “We are making incredible progress on one of the largest and safest construction projects in the country. This is an exceptionally challenging project. Everything is being done on a huge scale, under extreme conditions, and on tight timeframes. I am proud of the tremendous team we have working day and night keeping this project on track. Together we are building an iconic bridge that will serve this community for generations.”

Congresswoman Nita Lowey said, “The New NY Bridge is a blueprint for smart investments in critical infrastructure to bolster our economy, safety, and quality of life. I have proudly worked with Governor Cuomo at every step of this project, including by securing a $1.6 billion Transportation Infrastructure Finance and Innovation Act loan—one of the largest ever—to help finance its construction. As Ranking Member of the House Appropriations Committee, I will continue fighting hard for federal investments in projects like the New NY Bridge that bring jobs and economic growth to the Lower Hudson Valley.”

Senator Andrea Stewart-Cousins said, “In order to meet the demands of high volume traffic and an increasingly diverse economy, New York has invested in one of the largest infrastructure projects of our time. Rebuilding the 60 year old Tappan Zee Bridge is critical to the safety of motorists and to the stability of New York's infrastructure system. I commend Governor Cuomo for moving this project forward and look forward to the New NY Bridge opening in 2018.”

Senator David Carlucci said, "This transformative project will not only create a high-tech, durable bridge that is built to last, it will improve access to businesses on both sides of the Hudson by lessening travel time for motorists. By completing this project in 2018, New York will once again become a beacon for safe, unique, and energy efficient infrastructure. Thank you Governor Cuomo for your leadership on this project and for supporting the hundreds of construction jobs this project has created.”

The New York State Thruway Authority is the owner of the New NY Bridge project; Tappan Zee Constructors is the consortium designing and building the replacement for the Tappan Zee Bridge.