Governor Andrew M. Cuomo today announced that the Medal of Honor awarded posthumously to Sgt. Henry Johnson, an Albany resident, for his heroism during World War I is now on display in the War Room of the New York State Capitol.

The medal, which was presented by President Barack Obama on June 2, 2015, is the centerpiece of a display that commemorates Johnson’s valor during World War I and the Soldiers of the African-American 369th Infantry Regiment, known as the Harlem Hellfighters.

“Sgt. Henry Johnson was a hero and a patriot who for far too long was denied the recognition and honor he deserved,” said Governor Cuomo. “I'm proud to host his long overdue Medal of Honor at the Capitol and I thank Senator Schumer and Sgt. Johnson's many supporters for their efforts to right this historic wrong. As we approach Veterans Day, I encourage New Yorkers to visit this display and learn more about Sgt. Johnson's incredible life, as well as take a moment to acknowledge the many brave men and women who have served in defense of our nation and its ideals."

In 1917 Johnson enlisted and was assigned to Company C, 15th New York (Colored) Infantry Regiment – an all-black National Guard unit, which would later become the 369th Infantry Regiment of the 93rd Division of the American Expeditionary Forces.

In 1918 Johnson received the French Croix de Guerre in honor of his heroism in fighting off a German raiding part and preventing the capture of his fellow Soldier, Pvt. Needham Roberts. On the night of May 14-15, 1918, Johnson and Roberts were on outpost duty near Saint Menehoul, France when a raiding party of more than two dozen German Soldiers attacked them. Johnson fought back and was wounded 21 times in the fight.

While Johnson’s valor was lauded in the press, for decades he never received any American heroism awards. Albany residents enlisted the support of U.S. Senator Charles Schumer in pushing the Army to recognize Johnson with a Medal of Honor. That resulted in the award of a posthumous Distinguished Service Cross in 2002, as well as a Purple Heart in 1996. Continued research brought to light documents that convinced the Army to award Johnson the Medal of Honor.

Senator Charles Schumer said, “As a resident of Albany, and a true American hero, it is fitting that Sgt. Henry Johnson's Medal of Honor be showcased in his hometown so that area residents can see it for themselves. I am proud to have played a major role in both posthumously awarding Sgt. Johnson with this honor, and seeing that the Medal was brought to Albany. After years of advocating on behalf of Sgt. Johnson, it gives me great pleasure to see this symbol of his bravery on display in the place he called home."

Congressman Paul Tonko played an important role in this effort, as well, by introducing and arguing for a bill which allowed the President to award Henry Johnson’s medal decades after his heroic moment. Normally Medals of Honors must be presented within five years of the incident the servicemember is cited for.

Congressman Paul Tonko said, “If you’re from Albany, you know the story of Henry Johnson. The superhuman bravery demonstrated by Sgt. Johnson in defense of our nation and his fellow soldiers is a great source of pride for our community, and for almost a century these acts went un-recognized by our country. I have followed Sgt. Johnson’s story since long before becoming a Member of Congress and I am so glad to see it become known to more people every day. I thank the many individuals who never gave up on our tireless efforts to accomplish this goal, including Sgt. Johnson’s relatives, Senator Schumer, Governor Cuomo, and my predecessor Mike McNulty.”

New York Army National Guard Command Sgt. Major Louis Wilson received the medal from the president on behalf of Johnson during the White House ceremony in June because the Army could not identify any living relatives.

“I’m proud to recognize the heroism and dedication to duty of a New York National Guard Soldier whose valor inspires the men and women who serve in the National Guard today,” Major General Murphy said. “Henry Johnson set aside his civilian life to answer his country’s call and served with dedication and dignity.”

During the ceremony which marked the unveiling of the exhibit, Major General Murphy posthumously presented the New York State Medal of Valor, the state’s highest military decoration, to Johnson. Col. David Martinez and Command Sgt. Major Anthony McLean, the commander and command sergeant major of the 369th Support Brigade, accepted the medal on Johnson’s behalf.

The Capitol display features the Medal of Honor awarded to Johnson, along with artifacts from the collection of the New York State Military Museum that tell the story of Johnson’s heroism.

The City of Albany has embraced Henry Johnson as one of its favorite sons. Since 1991 motorists have driven on Henry Johnson Boulavard and Henry Johnson Charter School opened in Albany in 2007. Also since 1991 a bust of Henry Johnson has held a place of honor in Albany’s Washington Park at the southwest entrance to the park. 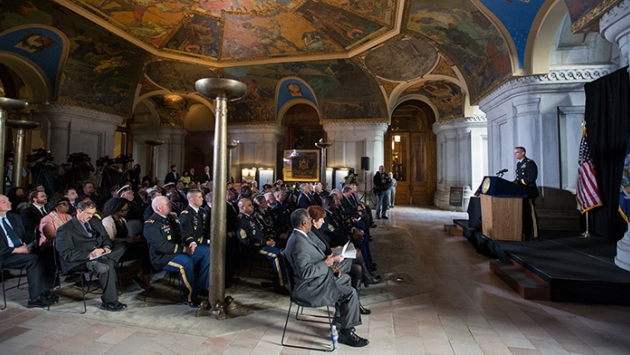 The Medal of Honor that was awarded to Sgt. Henry Johnson for his heroism during WWI is on display in the War Room of the New York State Capitol. 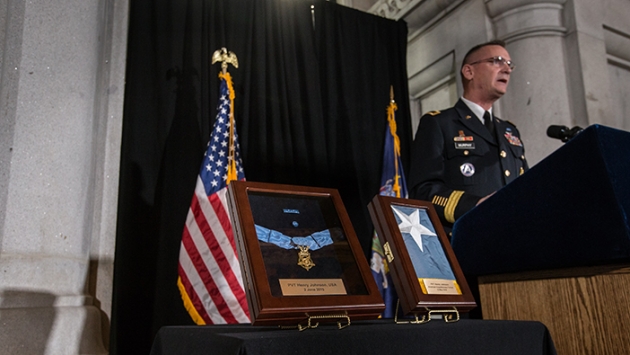 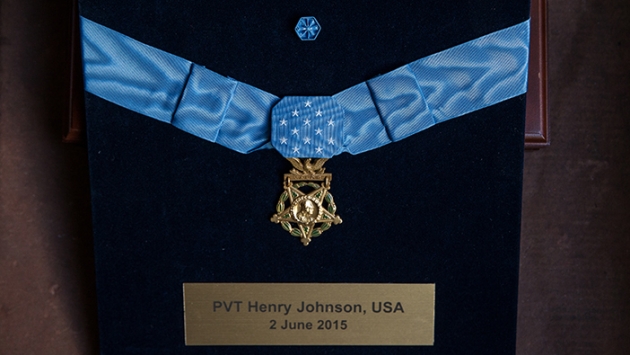 The medal, which was presented by President Barack Obama on June 2, 2015, is the centerpiece of the display. 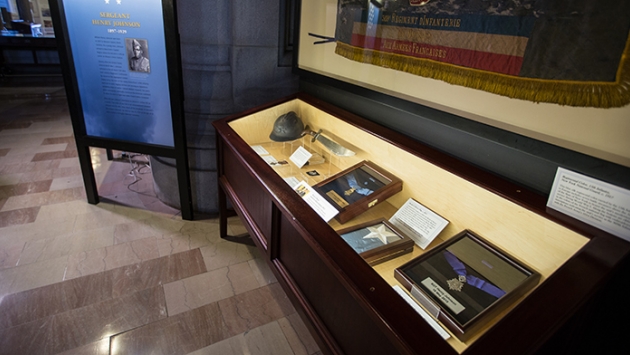 The Capitol display features the Medal of Honor awarded to Johnson, along with artifacts from the collection of the New York State Military Museum that tell the story of Johnson’s heroism.

Senator Neil Breslin said, "I am so pleased that Sgt. Henry Johnson was finally honored with the prestigious Medal of Honor earlier this year. Sgt. Johnson exemplified both true heroism and sacrifice. This week as we honor all of our service men and women, both past and present, I can think of no greater way to demonstrate our gratitude than to have Sgt. Johnson's Medal of Honor on display here at the state Capitol."

Assemblymember John T. McDonald III said, “This recognition of Sergeant Henry Johnson is long overdue and I am pleased that the Governor and the State are taking this opportunity to recognize his achievements and contributions. I encourage and invite the Capital Region community and beyond to take the time to learn more about Sergeant Johnson and his heroism."

Assemblymember Patricia A. Fahy said, "The heroic acts of Henry Johnson continue to be recognized and having Sgt. Johnson being awarded the state's Medal of Valor works to right this century-old injustice. It is an immense honor to have the Medal of Honor on display here in the New York State Capitol as an opportunity for Albany residents to commemorate their hometown hero."

“I am pleased to see that that Medal of Honor awarded to Sgt. Henry Johnson, a son of Albany, will on display in the State Capitol during the week of Veterans Day,” said Albany County Executive Daniel P. McCoy. “Sgt. Johnson will forever be remembered as a hero who was gravely injured on the front line in France. It is my hope that there may be some way to work to find a permanent home for the medal in Albany. I am also pleased that New York State is posthumously bestowing our highest honor, The Medal for Valor, to Sgt. Johnson. I encourage the public to go to the Capitol to learn more about the heroic actions taken by Sgt. Johnson in service to his fellow soldiers during World War I.”

“President Obama’s posthumous award of the Medal of Honor to Sgt. Henry Johnson was a proud day for Albany, and now we all have the opportunity to see his hard won honor,” said Albany Mayor Kathy M. Sheehan. “Thank you Governor Andrew Cuomo and New York’s National Guard for bringing the Medal of Honor here and displaying it in such a high place of esteem in our Capitol.”

The Office of General Services conducts tours of the Capitol every weekday and on the second Saturday of each month which include information on the history of the building, stops at special exhibits and the historic Hall of Governors. In addition, the Empire State Plaza is a special site of remembrance and tribute with a number of memorials that honor New Yorkers who have dedicated or given their lives in service to others. These include the WWII Memorial, Korean War Veterans Memorial, Vietnam Memorial, Purple Heart Memorial, and Women Veterans Memorial. The New York State Vietnam Memorial Gallery, located in the Robert Abrams Building for Law and Justice is open to the public on weekdays from 9 a.m. – 3 p.m. Information on Capitol tours, the memorials, and museum can be found at www.ogs.ny.gov.