With 90 Homes Restored and Rebuilt, New York is on Target to Reach Goal of 150 Homes Renovated Throughout the Initiative

Over 400 Student and Labor Volunteers Have Dedicated More Than 25,000 Hours to Rebuilding Efforts

Governor Andrew M. Cuomo today announced major milestones accomplished through the NY Stands with Puerto Rico Recovery and Rebuilding initiative launched in April. To date, 90 homes have been cleaned, restored, and rebuilt across the island, indicating that New York State is well on its way to reaching its goal of 150 homes renovated through the initiative. So far, over 400 student and labor volunteers have dedicated more than 25,000 hours to the initiative, and with two major deployments remaining, New York State will have mobilized more than 500 student volunteers and over 100 skilled labor volunteers to assist with recovery and rebuilding efforts this summer.

"As the federal government turned their back in the wake of one of the most devastating natural disasters to ever hit Puerto Rico, New York stepped up and continues to stand with our fellow Americans during their greatest time of need," Governor Cuomo said. "These milestones are more than numbers, they represent real people whose lives have been restored and the progress made toward our goal to build the island back stronger than ever before. We will proudly continue to support the island until each and every home is rebuilt and the people of Puerto Rico have all they need to thrive. It's just the New York way."

"Hundreds of SUNY and CUNY students have volunteered their time to help families in Puerto Rico recover from the natural disaster that devastated their communities," said Lieutenant Governor Kathy Hochul. "While the federal government fails to help with rebuilding efforts, New York is standing up and helping our brothers and sisters when they need it most. Governor Cuomo and I remain committed to helping our fellow Americans build back better and ensure their safety from future disasters. We will continue to support the NY Stands with Puerto Rico Recovery and Rebuilding Initiative until the job is done."

The Governor is currently in Puerto Rico leading a delegation of SUNY and CUNY presidents and students, as well as nonprofit partners, labor leaders, and elected officials, to support the ongoing efforts on the island. This trip marks the Governor's fifth trip to Puerto Rico in the wake of Hurricanes Maria and Irma, and part of the third deployment of SUNY and CUNY student volunteers since the initiative began.

Members of the delegation will participate in rebuilding efforts in the Northern and Central regions of the island as well as the San Juan Metro Area and will return in the evening of Tuesday, July 24. Volunteers will work side by side with the non-profit rebuilding organizations All Hands and Hearts, Heart 9/11, and NECHAMA.

As the federal government turned their back in the wake of one of the most devastating natural disasters to ever hit Puerto Rico, New York stepped up and continues to stand with our fellow Americans during their greatest time of need.

As part of the NY Stands with Puerto Rico Rebuilding and Recovery initiative, student volunteers deploy for two weeks at a time and have the opportunity to earn college credits for their work. Volunteers with the New York Building and Construction Trades continue to deploy in one to two week waves throughout the summer. In addition, UNICEF USA has committed funding to support this effort.

The ongoing deployments follow the second phase of the initiative launched on April 29, in which the Governor deployed a Tactical Assessment Team to develop a comprehensive rebuilding plan for the island. The Assessment Team's findings continue to guide the deployments throughout the summer. Three prior deployments on July 15, July 1, and June 17 each included more than 100 SUNY and CUNY students and volunteers, and over 25 skilled labor volunteers.

SUNY Chancellor Kristina M. Johnson said, "Countless SUNY students, faculty, and staff, have dedicated their time to make the Puerto Rico Recovery and Rebuilding Initiative a success, including 150 people on the island this summer rebuilding homes and clearing the damage caused by Hurricanes Irma and Maria 10 months ago. I look forward to volunteering with our students there later this week and working to expand SUNY's partnerships in Puerto Rico, including joining a sustainable solar project between Alfred State and the University of Puerto Rico."

Interim CUNY Chancellor Vita C. Rabinowitz said, "We are so proud of The City University of New York students who have taken part in the Governor's New York Stands with Puerto Rico Recovery and Rebuilding Initiative this summer. With their time, talent, and hard work, they have inspired all of us with their commitment to helping fellow Americans in need."

Building & Construction Trades Council of Greater NY President Gary LaBarbera said, "Governor Cuomo and his administration has already done so much to help our brothers and sisters in need on the Island of Puerto Rico. The New York Stands with Puerto Rico Recovery and Rebuilding Initiative shows that the Governor's commitment to the people of Puerto Rico doesn't stop until they are safe from future storms. We are proud that our skilled workforce is part of these continued efforts to build resilient homes in some of the worst hit areas on the island."

Caryl Stern, President and CEO, UNICEF USA said, "UNICEF USA has developed and supported programs where kids help kids for decades, and we are so glad that this project empowers young people to support families in Puerto Rico and builds a new generation of leaders. We are thankful to the Governor, the students and other partners involved for their hard work in bringing this project to fruition, and for allowing us to support such a positive initiative." 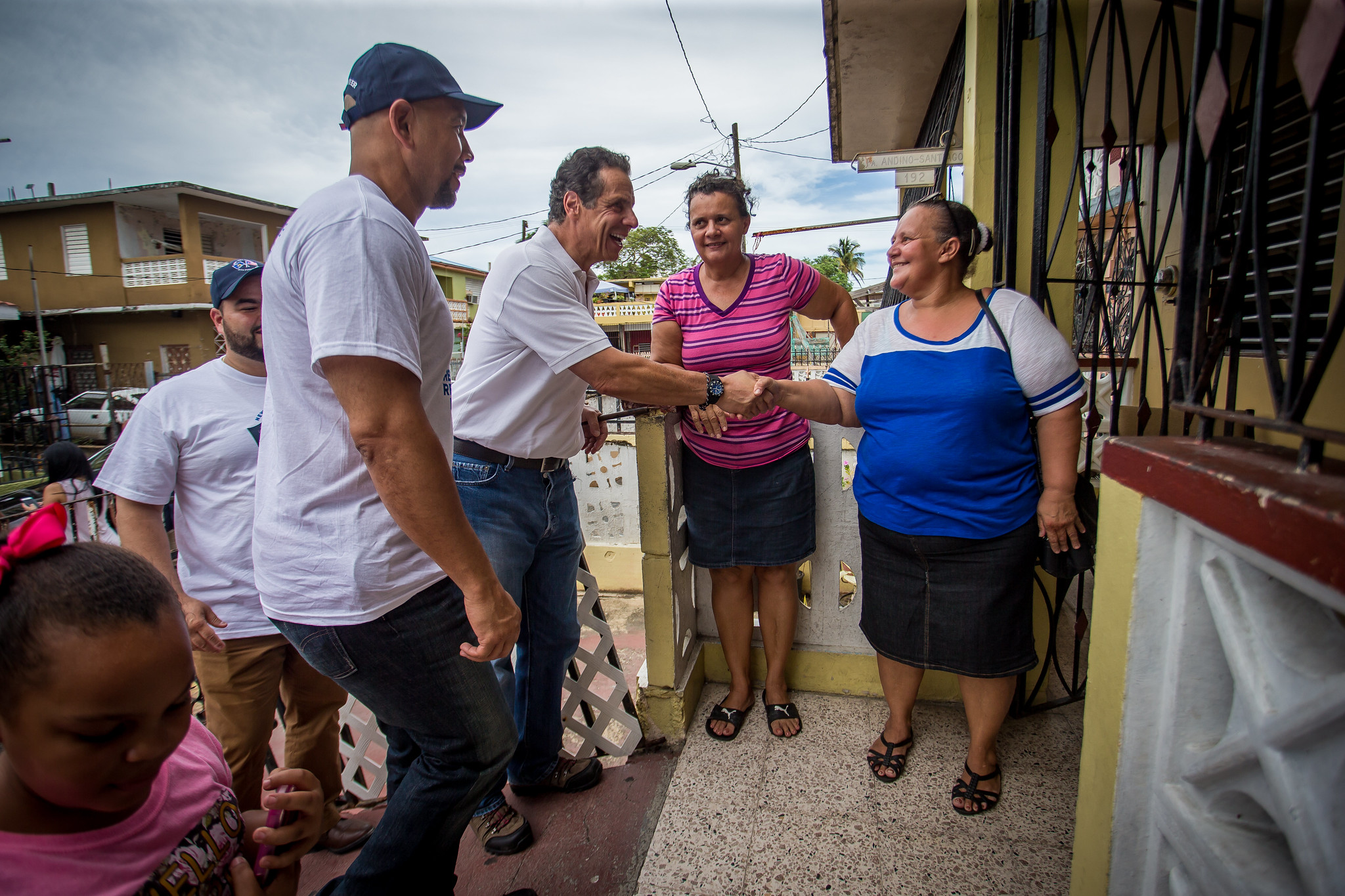 Governor Cuomo continues to build on New York State's efforts to assist Puerto Rican families in New York who were forced to flee their homes after Hurricane Maria devastated the island. Last month, as federal rental assistance was set to expire at the end of June, the Governor directed the Office of Temporary and Disability Assistance to establish a $1.2 million program to provide robust housing case management services to displaced Puerto Ricans, and directed the Department of Labor to provide up to $10 million in job training and placement funding to community based organizations.

The Governor also announced last month that the SUNY Board of Trustees and CUNY Board of Trustees would be extending in-state tuition for students displaced by Hurricanes Irma and Maria. The extension of the authorization will allow students from Puerto Rico and the U.S. Virgin Islands to attend stated-operated colleges for the 2018-19 academic year at a lower cost to ease the burden as their families recover from the devastation following these natural disasters. In the spring 2018 semester, approximately 50 displaced students took advantage of the in-state tuition rate at SUNY colleges and 200 displaced students at CUNY colleges.

Governor Cuomo and the New York Congressional Delegation continue to advocate for Puerto Rico to receive necessary federal aid. In December, Governor Cuomo and Puerto Rico Governor Ricardo Rosselló, along with members of the New York Congressional Delegation, released a Build Back Better Assessment Report. The report identified specific sectors needing investments, including housing, power grid and resiliency, agriculture, and others. Together with $487 million for public safety and first response aid and $9 billion for long-term recovery management, the total funding need is $94.4 billion.

For more information about the recovery and relief efforts underway in Puerto Rico, and to learn how you can assist, please visit the Governor's Empire State Relief and Recovery Effort for Puerto Rico and the U.S. Virgin Islands webpage.