Governor Andrew M. Cuomo today announced the launch of a 200-member multi-agency Minimum Wage Enforcement and Outreach Unit charged with ensuring that all minimum wage workers are paid the proper rate. The Enforcement and Outreach Unit, a first-of-its-kind in the nation, will also help businesses understand their responsibilities and workers understand their rights under the new wage regulations.

Earlier this year, Governor Cuomo signed landmark legislation making New York the first state in the nation to enact a $15 minimum wage. On December 31, 2016, the first benchmark of the phase-in schedule for the minimum wage increase went into effect.

"New York led the way and became the first state in the nation to enact a $15 minimum wage, because no one who works full-time should be condemned to a life of poverty," Governor Cuomo said. "With the first increase in the minimum wage now in effect, this new enforcement unit will ensure that workers are being paid what they earned, and employers who flaunt the law will be held accountable. I urge any minimum wage worker who does not receive their increase to call the Department of Labor Hotline (1-888-4-NYSDOL) to ensure they receive a fair day’s wage for a fair day’s work."

“With the launch of this new Enforcement and Outreach Unit, we are supporting the Governor’s historic legislation and efforts to ensure all New Yorkers receive the wages they deserve,” said Department of Labor Commissioner Roberta Reardon.“No one who works full time should be forced to live in poverty and I applaud Governor Cuomo for establishing the minimum wage hotline, creating a worker protection web tool, and provide the investigators necessary to enforce the minimum wage increase. New York was founded by hard-working men and women and we will do everything in our power to make sure they are paid a fair day's pay for a fair day's work."

"This new enforcement unit will ensure that workers are being paid what they earned, and employers who flaunt the law will be held accountable."

The Enforcement and Outreach Unit: 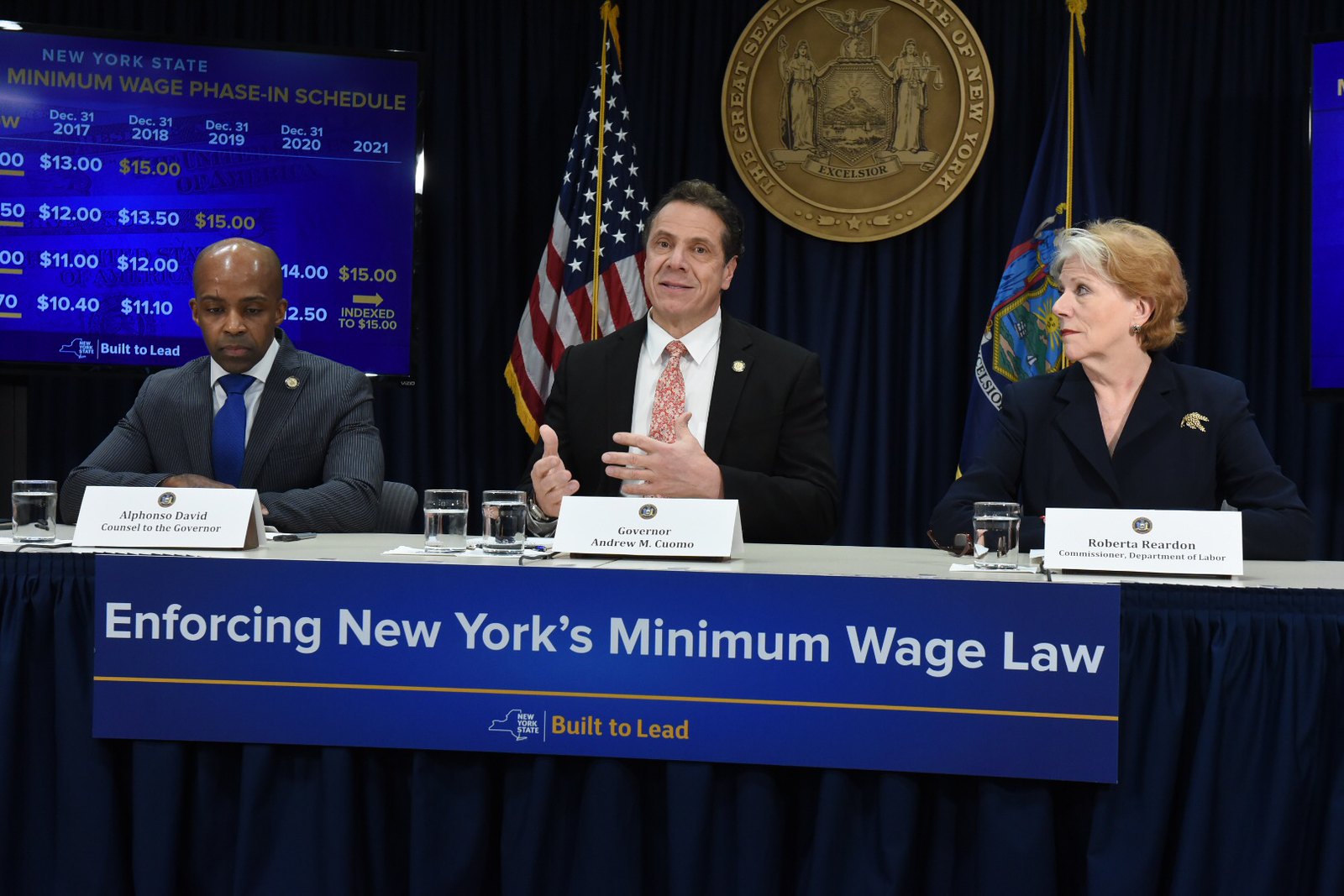 A new worker protection web tool is available at ny.gov/MyWage. This web tool will help individuals determine the minimum wage they should be paid by their employer under the new wage rates. Minimum wage can be affected by the date, the location of employment and any tips that may be received.

The tool may not cover additional aspects of the minimum wage law that could result in further adjustments to pay. Additional questions may be submitted using the Minimum Wage Hotline.

Every worker complaint that is reported to the state will be investigated by the Enforcement and Outreach Unit. The Unit strongly urges any worker who has not been paid the proper wages, or anyone concerned that they are not receiving fair pay, to contact the Minimum Wage Hotline at 1-888-4-NYSDOL (6-9-7-3-6-5).

Trained investigators will both proactively investigate potential minimum wage violations and respond to complaints received through the minimum wage hotline and worker protection website. The Unit will be supported by investigators who speak multiple languages. Additionally, state agencies have comprehensive language access services available to employees and customers to help address every complaint.

In April 2016, the Governor championed the nation-leading legislation to require 12 weeks paid family leave and $15 minimum wage for all New York State workers. The new minimum wage, set to be phased in across the state through 2020, in addition to paid family leave, were made possible by the millions of New Yorkers who supported the Mario Cuomo Campaign for Justice to achieve fair and decent pay for the working class. The increase in minimum wage will impact 2.3 million New Yorkers – about a quarter of the total workforce. These workers will experience higher pay, increasing spending power by more than $15.7 billion.

The launch of the state’s Enforcement and Outreach Unit builds on Governor Cuomo’s comprehensive efforts over the past six years to protect worker’s rights. In May 2015, the Governor announced a task force to tackle abuse in the nail salon industry, and in July 2015, the Governor signed legislation to protect and support nail salon workers, while also launching a multi-agency task force to combat workers exploitation and abuse in 14 industries including day laborers, farm, domestic, restaurant, and car wash workers.

The $15 minimum wage legislation was passed as part of the 2016-17 state budget, and marks a major accomplishment in the Governor’s efforts to restore economic justice and fairness to working families in New York State. The phase-in schedule on a regional basis is as follows:

It is estimated that more than 2 million people will be affected by the increases in the minimum wage. A regional breakdown of the number of workers earning below $15 is available below:

More information is available at www.ny.gov/minimumwage.