Governor Andrew M. Cuomo, together with New York-based hotel investment firm MCR, today broke ground on the legendary TWA Flight Center at JFK International Airport. The much-lauded conversion plan will transform the storied Saarinen terminal into the centerpiece of a world-class 505-room hotel while delivering state-of-the-art lodging and best-in-class services to millions of travelers each year. The landmark facility, which has been closed to the public since 2001, will preserve Eero Saarinen’s internationally-revered Midcentury Modern design and deliver an on-site airport hotel to the nation’s premier international gateway.

“JFK Airport is one of the largest international transit hubs in the world and a key driver of New York’s economy,” Governor Cuomo said. “The conversion of the TWA Flight Center into a new state-of-the-art hotel will preserve this iconic landmark while cementing JFK’s status as a crown jewel of aviation. This groundbreaking builds on our efforts to modernize gateways across the state and we will continue working to drive growth, support thriving regional economies and build 21st century infrastructure of the caliber that New York deserves.”

With over 56 million passengers each year, JFK is the nation's largest international airport. JFK, however, is one of the few airports in the nation without an on-airport hotel. This game-changing $265 million construction project, which is completely funded by the private sector, will change that – rehabilitating the TWA Flight Center to serve as JFK’s first full-service hotel.

The project will generate 3,700 jobs, including union construction and hotel jobs. Under an agreement approved by the Port Authority’s Board of Commissioners, a partnership of MCR development and JetBlue will remake the TWA Flight Center, with MCR and JetBlue retaining 95 and 5 percent ownership of the facility respectively. The redevelopment project was first announced by Governor Cuomo in July and is expected to open in 2018.

The restoration plans include reviving and rehabilitating the Terminal’s iconic interiors by Charles Eames, Raymond Loewy, and Warren Platner. The project will also include an innovative museum showcasing New York as the birthplace of the Jet Age, the storied history of Trans World Airlines and the Midcentury Modern design movement.

“The conversion of the TWA Flight Center into a new state-of-the-art hotel will preserve this iconic landmark while cementing JFK’s status as a crown jewel of aviation."

Featuring LEED design, the hotel complex will be set back on either side of the terminal, situated and designed to defer to the historic landmark. Hotel guests and passengers from every terminal will be able to reach the TWA Hotel via the AirTrain as well as through the iconic Saarinen passenger tubes that connect directly to Terminal 5. The hotel will contain 40,000 square feet of meeting and event space, a 10,000 square foot observation deck where guests can watch planes take off and land, and eight food and beverage outlets including the revived Ambassador’s Club, Lisbon Lounge and Paris Cafe. Construction will be managed by Turner Construction Company.

Tyler Morse, CEO of MCR Development, the New York-based hotel investment firm responsible for the TWA Flight Center redevelopment plan, said, “The passion for this incredible building and the outpouring of support for our plan to preserve Saarinen’s masterpiece and permanently reopen it to the public as a 500-room hotel has been astounding. We are proud to play a part in Governor Cuomo’s plan to revitalize our region’s airports and we are excited to get to work as we breathe new life into one of the most important buildings in America.”

Robin Hayes, President and Chief Executive Officer of JetBlue, said, “We are thrilled to see the historic TWA Flight Center site come back to life and in such a special way with all the nods to the excitement of the jet age. JetBlue is proud to partner with MCR Development as they offer our customers the perfect place to enjoy an evening before an early morning JetBlue flight to one of our 100 destinations. Thanks to Governor Cuomo's leadership and support, the debut of the TWA Hotel is great news for the Queens community and the growing number of travelers who pass through Kennedy Airport each year.” 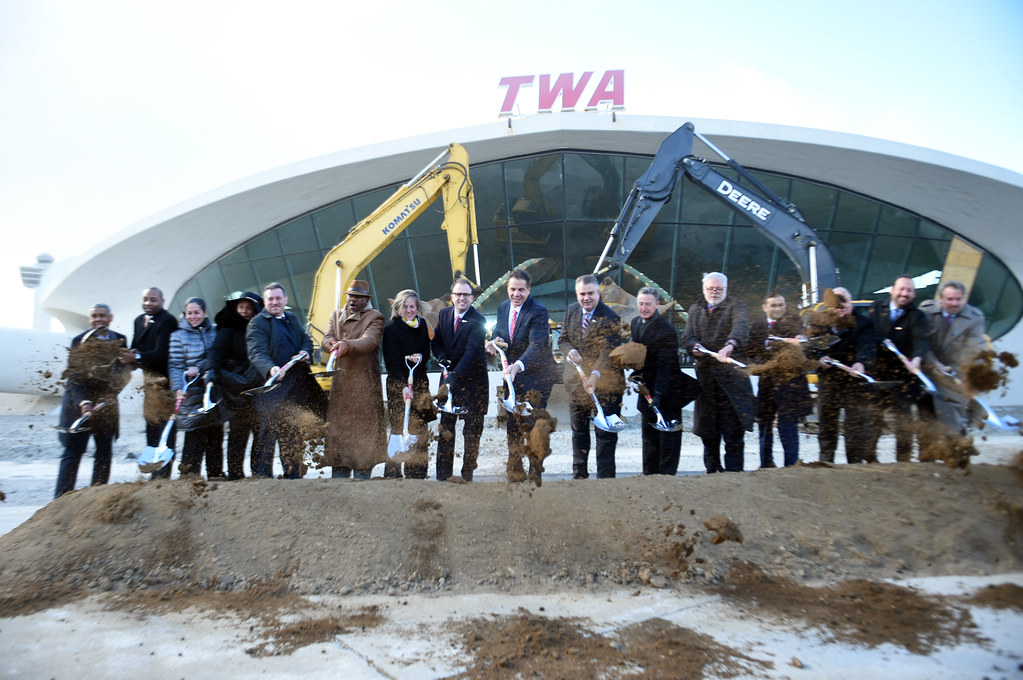 Queens Borough President Melinda Katz said, “The iconic TWA Flight Center Hotel at JFK Airport is an invaluable investment in the borough of Queens, and will offer a unique experience for international visitors and New Yorkers alike. The magic of the Jet Age will soon be relived in one of the world's most famous mid-century historic icons, replete with guest rooms and 40,000 square feet of event and meeting space. Queens thanks Governor Cuomo for his vision and leadership on revitalizing our airports, and we look forward to welcoming the hotel's 3,700 permanent and construction jobs.”

Peter Ward, President of the New York Hotel & Motel Trades Council, AFL-CIO, said, "On behalf of our 32,000 members, we look forward to the completion of the TWA Flight Center, which will be a boon to the city’s hospitality industry and its workers once it’s transformed into first-class hotel. Organized Labor has a strong partner in Governor Cuomo, and his support for this major project has been invaluable. New Yorkers are ready to get to work at this iconic piece of New York City history."

Gary LaBarbera, President of the Buildings and Construction Trades Council of Greater New York said, “The TWA Flight Center will provide visitors to New York with a new first-rate hotel and museum, as well as provide construction workers with opportunities for jobs with good wages, health insurance and retirement security. We applaud Governor Cuomo for his leadership and support, and look forward to the repurposing of this iconic symbol in aviation history."

Richard T. Anderson, President of the New York Building Congress said, “The New York Building Congress enthusiastically supports the adaptive reuse of the TWA Flight Center. The redevelopment of that space into an on-airport hotel will rectify a major deficiency at JFK, create thousands of jobs, and re-introduce one of the world’s most iconic structures to a new generation of New Yorkers and visitors from around the globe. This project is the latest of Governor Cuomo's major visionary infrastructure projects that is sure to transform the region.”

John Banks, President of the Real Estate Board of New York, said, “Projects like the new TWA Hotel ensure that New York City continues to grow and thrive. This state-of-the-art hotel will maintain an architectural gem, honor our aviation history and keep New York on the cutting edge of preservation-sensitive development necessary for growth and economic success. I commend Governor Cuomo for his dedication to this project.”

Joe Sitt, Chairman and Founder of the Global Gateway Alliance, said, “First-class hotels are a hallmark of a 21st-century airport, and for too long JFK has been among the very few major airports in the country without this amenity. Thanks to Governor Cuomo's commitment to this project, this problem has a solution. The new hotel at the former TWA Flight Center will not only fix this problem and bring JFK on par with our competitors; it will also reopen the iconic structure to both New Yorkers and the millions of passengers who pass through the airport every year.

Thomas J. Grech, Executive Director, Queens Chamber of Commerce, said, “We applaud both the rehabilitation of the TWA Flight Center and the project’s commitment to employing local Queens residents. The economic revitalization of Queens has been transformative, thanks to Governor Cuomo's major investments and dedication to driving commerce in our region, and this project will contribute to that remarkable growth. This visionary project will provide thousands with good jobs and ensure JFK Airport remains economically competitive for years to come.”

Bill Rudin, Chair of the Association for a Better New York, said, “The revitalization of the TWA Flight Center shows that New York can at once pay homage to its history and lead the world in first-class development. This redevelopment is also an important step in ensuring that our transportation hubs are equipped for the 21st century traveler’s needs. JFK airport workers, New York City residents and the millions of tourists passing through the transit hub every year will be able to benefit from this innovative hotel and event space. I applaud the leadership of Governor Cuomo and MCR Development on this project that will help contribute to a better New York for years to come.

Senator Joseph Addabbo said, “All great endeavors start with a vision and initiative. JFK Airport is a major hub in our borough and my district, not only for transportation but for retail, restaurants, tourism and all the other industries that operate at the airport. Efforts made within the airport will have countless benefits on our economy, tourism industries and local job growth. I thank our Governor, Tyler Morse and others for being the guiding force on creating this new hotel destination and for having a positive vision for New York's future.”

Senator Leroy Comrie said, “JFK is a critical transit hub and an iconic gateway of Queens and by revitalizing the iconic TWA Flight Center, we are strengthening our community’s role in New York City’s tourism market. This project will create a new M/WBE standard, increase local employment, attract private investment and help strengthen our economy. I thank the Governor and the partners involved for making this announcement possible and I look forward to seeing progress on this historic center get underway.”

Senator James Sanders said, "Thanks to the leadership of Governor Cuomo, the TWA Flight Center will once again be a place that engenders New Yorkers pride. By preserving the original Saarinen designed concourse and creating a hotel with over 500 guestrooms, 40,000 square feet of event space, and a 10,000 square foot observation deck, the landmark site will finally meet the needs of 21st century travelers and become an economic engine for Queens."

Assemblywoman Alicia Hyndman said, "The TWA flight Center is an iconic landmark that captured the excitement of the jet age and I'm excited to hear that it will be restored and modernized for the next generation" said Assemblywoman Alicia Hyndman. "As a member of the Economic Development committee in the State Assembly, it's important to create projects that provide high quality union jobs to build the middle class in the 29th Assembly district."

Council Member Donovan Richards said, “JFK is one of our community’s greatest assets and we must ensure it can meet the demands of the 21stcentury. The plan to transform the iconic TWA Flight Center into a world-class complex is another step forward in realizing the Governor’s vision to build 21stcentury infrastructure throughout the state. This will be a major driver for the Queens economy and will serve as a symbol for our region’s upward growth.”

For more information on the TWA Hotel please visit: www.twahotel.com.