Governor Andrew M. Cuomo today announced the grand opening of the Rivers Casino & Resort in Schenectady. The $330 million resort features a 51,000 square-foot gaming floor, a luxury hotel and multiple dining and retail options as part of a larger Mohawk Harbor Redevelopment project. Rivers has created 1,025 permanent jobs with another 50 expected once the connected luxury hotel and spa open later this year. Construction of the casino resulted in more than 550,000 hours and 1,710 construction jobs in the Capital Region.

“The new Rivers Resort & Casino is a vital economic asset for the Capital Region, generating new jobs and opportunity, continuing Schenectady’s resurgence and moving the region forward," Governor Cuomo said. “By supporting destination resorts across upstate New York, we are showing off the best of the Empire State while attracting new visitors, boosting tourism, and helping support and strengthen our local communities.”

Governor Cuomo’s Upstate New York Gaming and Economic Development Act of 2013 mandated that all state revenue from Rivers be directed back to the local level. Ten percent of the state’s tax revenue from the casino is split between the City of Schenectady and Schenectady County for hosting the facility, and Albany, Fulton, Montgomery, Rensselaer, Saratoga, Schoharie and Washington counties share another 10 percent. The remaining 80 percent of revenue is distributed statewide to support public education or provide tax relief to New Yorkers.

In addition to creating more than 1,000 jobs during construction, Rivers has created 1,025 permanent jobs with the casino opening and will create another 50 when its hotel and spa open this summer. In addition, local governments — the City of Schenectady, school district, Schenectady County and other neighboring counties in the gaming region established by the state — will see a significant, positive, direct impact from Rivers Casino & Resort Schenectady through their share of the casino’s gaming tax payments to the state.

“By supporting destination resorts across upstate New York, we are showing off the best of the Empire State while attracting new visitors, boosting tourism, and helping support and strengthen our local communities.”

Rivers Casino & Resort Schenectady was developed by The Galesi Group, a real estate development company headquartered in Schenectady. Founded in 1969, The Galesi Group has invested over $100 million in downtown Schenectady over the last five years. The company owns and manages a diverse real estate portfolio in excess of 11 million square feet of commercial, industrial and multi-family properties and has owned or developed over 20,000 apartments nationwide. Rivers is operated by Rush Street Gaming, which has developed and currently operates three casinos in Des Plaines, Illinois and in Pittsburgh and Philadelphia, Pennsylvania. Several Rush Street principals were involved in the development and operation of the Fallsview Casino Resort in Niagara Falls, Ontario, the most profitable casino in Canada.

Prior to the casino referendum being approved by voters in 2013, Empire State Development invested approximately $9 million to prepare the Mohawk Harbor site and remove barriers to attract private investment in and around the site. The New York State Department of Environmental Conservation also provided brownfield tax credits to assist in remediation of the former locomotive plant. 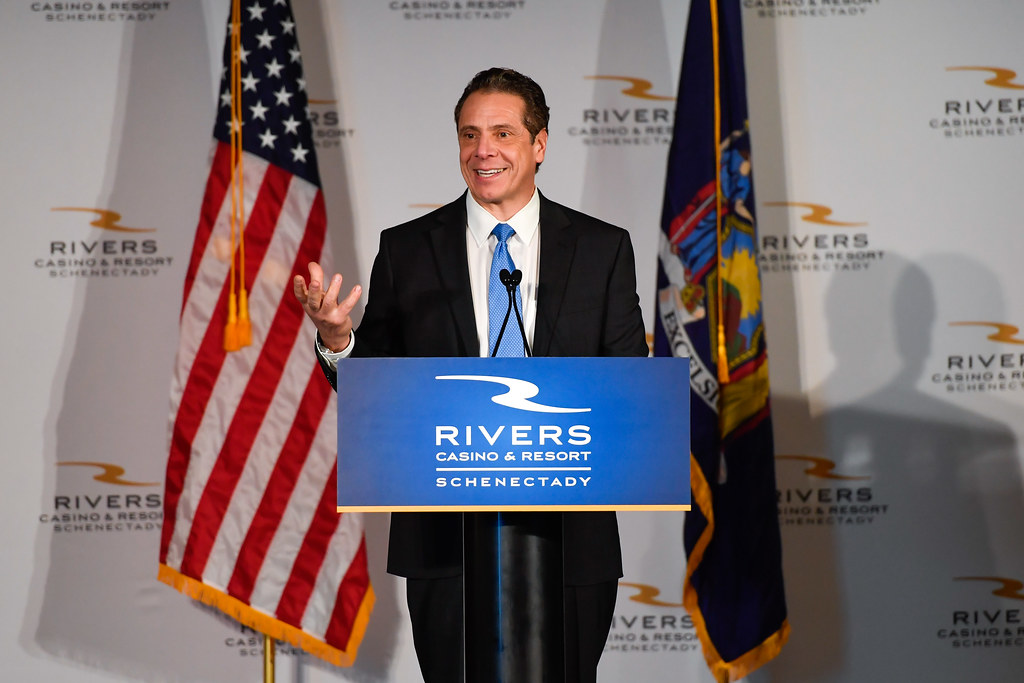 Francesco Galesi, CEO of developer The Galesi Group, said, “The Galesi Group’s roots in Schenectady go back to 1969 and today, thanks to Governor Cuomo’s economic development policies and casino siting process, is a pinnacle moment in our company’s legacy. This is a true testament to the thousands of workers who gave their time, energy and spirit into building this project, which is a critical part of the rebirth of our storied city. We look forward to completing the Mohawk Harbor project to complement the casino and drive further growth in our community and beyond.”

Rush Street Chairman Neil Bluhm said, “I want to commend Governor Cuomo for delivering on his vision to make New York State 'Open for Business' and for leading the revitalization of communities all across upstate New York. The speed at which New York State adopted new legislation, undertook a highly competitive process, and allowed new casinos to develop from the ground up is truly remarkable. We are excited that the City of Schenectady and the Capital Region will be the newest addition to the Rush Street family.”

Rush Street Gaming CEO Greg Carlin said, “Rivers Casino in Schenectady is opening a little more than one year after breaking ground, and I'm confident our guests are going to be wowed by the quality, the design and the overall experience of our newest entertainment destination. I'm proud of our entire Rush Street team including the more than 1,000 new team members we've hired who have made the opening of Rivers Casino in Schenectady an important milestone not just for Rush Street Gaming, but for upstate New York.”

Schenectady Mayor Gary McCarthy said, “Rivers Casino and Resort will be a tremendous boon to the local economy in Schenectady and the entire Capital Region. Thanks to the leadership of Governor Cuomo, Rush Street Gaming, and all parties – this impactful project is now a reality and we will continue to see the economic benefits of the casino for years to come. From strengthening the upstate tourism industry to driving new visitors to our local businesses, shops and stores, this project is a win-win for everyone. I congratulate Rivers on their grand opening, and look forward to seeing it become a major destination in New York for millions of visitors to enjoy.”

Assemblymember Angelo Santabarbara said, "This transformative project and its location not only means many good-paying jobs for the region, but also new economic development opportunities. The Mohawk Harbor site in Schenectady has now become the catalyst for additional projects in the surrounding areas, including new hotels, restaurants and many more supporting industries. With this project now complete, we are already seeing a positive impact on the local economy and the tourism landscape in the Capital Region."

Assemblymember Phil Steck said, "The Rivers Casino & Resort has revitalized what was once a brownfield in downtown Schenectady. The Galesi Group spearheaded the development of an amazing facility that will bring new tax revenue to Schenectady. In fact, it has already enabled property tax relief for citizens of that City."

Based on Rivers’ estimates, the resort and casino is projected to bring in 2.8 million visitors per year. In total, the four commercial casinos – del Lago, Tioga Downs, Montreign and Rivers -- when fully operational will generate $325 million in gaming taxes, of which $65 million will be directed to localities and $260 million will support public education.