Governor Andrew M. Cuomo today announced the grand opening of Pier 76, a new recreational and cultural space on Manhattan's western Hudson River shoreline, achieving the long-awaited inclusion of the former New York City Police Department impound parking facility into Hudson River Park. The project was completed in only 81 days, or less than three months. The Governor also announced that Pier 76 will be one of the sites hosting outdoor screenings for this year's reimagined Tribeca Film Festival.

"As New Yorkers continue to make incredible strides in defeating COVID, we must focus on rebuilding and revitalizing our state for a post-pandemic future and nothing is more emblematic of this historic effort than Pier 76," Governor Cuomo said. "For years, Pier 76 was an eyesore that blighted the west side. However, thanks to the hard work of so many New Yorkers, this gorgeous new park will provide residents and visitors with incomparable access to outdoor recreational opportunities and cultural attractions like the Tribeca Film Festival for years to come."

In January, New York State took possession of Pier 76, located at West 37th Street and 12th Avenue, from New York City, which had used the 5.6-acre site and structure as a police department impound lot facility. The State Office of Parks, Recreation and Historic Preservation dismantled the 245,000 square-foot impound facility at the Pier in early spring and created interim public recreation space to include a walking area and outdoor flexible space, as well as benches for people to relax and enjoy the waterfront views. The impound facility's steel support structure was temporarily left intact to create a unique setting and partial shade. The $31 million project included environmental abatement, repaving, and installation of railings and lighting. Nineteen interpretive panels relay the history of the area, including the indigenous Lenape of Mannahatta and the evolution of the shipping industry.

The Pier also features a propeller from the S.S. United States passenger liner, famous as the record holder for the fastest passenger ship to cross the Atlantic Ocean. Nearly 20 feet in diameter, the propeller weighs 73,000 pounds. After completing 400 transatlantic voyages, the United States was retired from active service in 1969 due to the advent of affordable jet passenger service to cities across Europe.

The New York State Office of General Services performed remediation and selective demolition of the mechanical and electrical systems to make way for the overall construction effort. In addition, OGS assisted with code inspection services to ensure safe public access and use of the space.

New York State Parks Commissioner Erik Kulleseid said, "It's truly exciting to provide access to this unique open space for visitors and residents of Chelsea, Clinton and Midtown communities, who've waited years for it to become reality. The last year has underscored how much parks mean to our communities, and Pier 76, with its astonishing urban and waterfront views, is quality open space like no other."

HRPT President and CEO Noreen Doyle said, "It's always a joyous day for Hudson River Park and New York City when we can offer more open space for the public to enjoy. We thank Governor Cuomo, Commissioner Kulleseid and their staffs for delivering acres of new interim park area to the public in record time, just in time for the Tribeca Film Festival and all the fun that summer in New York City always brings.  We look forward to welcoming the public to our newest park pier."

Thanks to the hard work of so many New Yorkers, this gorgeous new park will provide residents and visitors with incomparable access to outdoor recreational opportunities.

New York State Department of Environmental Conservation Commissioner and HRPT Board of Directors Vice Chair Basil Seggos said, "The transformation of Pier 76 from an NYPD impound lot into a first-class recreational resource will provide an urban oasis for those who call Manhattan's West Side home and millions of visitors drawn to Hudson River Park each year. The opening of Pier 76 will connect countless New Yorkers and visitors from around the world to this spectacular space offering sweeping views of New York's famed cityscape along the iconic Hudson River."

Senator Brad Hoylman said, "I'm pleased that Pier 76 is finally opening to the public. This has been a hard-fought win for the neighborhood for over more than 20 years and I greatly appreciate the work the community and in particular, Community Board 4, has done to return this space back to the public. It is wonderful to have a more accessible, free outdoor space for the city as we work to reopen safely. I look forward to hearing from the community and Hudson River Park Trust about continued interim park uses of the space as the long-term plan is finalized."

Senator Robert Jackson said, "Reopening Pier 76 to the public is great news for the summer, especially for the renowned Tribeca Film Festival. I look forward to working with our colleagues in the Hudson River Park Trust and its Advisory Council, as well as Community Board 4, to plan for the long-term future of this public space so it can be safely enjoyed by generations of New Yorkers to come."

Assembly Member Richard Gottfried said, "Governor Cuomo ensured this project is finally happening after many years of delay," said Assembly Member Richard Gottfried, the author of the Hudson River Park legislation. "I thank State Parks for the quick work it did to ensure that Pier 76 is open to the public for the summer. We cannot have enough open space and this new space is well-designed and will surely be enjoyed and appreciated by all."

Assembly Member Deborah J. Glick said, "I am pleased to see this resolution for the use of Pier 76 as a wonderful new addition to Hudson River Park. As we've learned this past year, open public space is essential for maintaining New Yorkers' health and well-being, and I am grateful to the Governor and the community for their work in making it a reality."

Assembly Member Linda B. Rosenthal said, "After working in close collaboration with the Administration, community members and representatives of Manhattan's Community Board 4, Hudson River Park Trust, my colleagues in government and more, I am thrilled that Pier 76 will finally be open to the public, allowing more New Yorkers to enjoy the beauty and programming of Hudson River Park. For years, the NYPD tow pound occupied prime pier space that could and should have been used to provide New Yorkers with public access to waterfront recreational space. This is a real victory for the community and the speed with which public access was made available is a real testament to the good that government can do when all parties are working together on a common goal. The Hudson River Park is a first-class community resource, I look forward to continued collaboration as we work to make more Hudson River Park space publicly accessible." 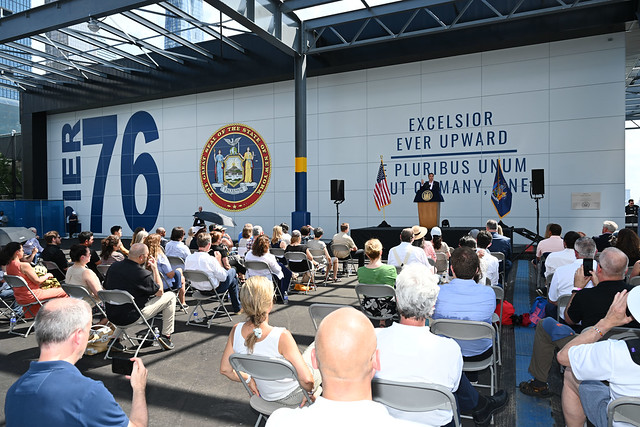 New York City Council Speaker Corey Johnson said, ""If COVID taught us anything, it's that open public space is more important than ever, so today's news is really something to celebrate. The fact that New Yorkers will have a new place to enjoy and play outside at the start of summer is icing on the cake. I look forward to visiting Pier 76 with the community soon."

Manhattan Borough President Gale Brewer said, "Pier 76 will provide ample new public space and greenery for visitors and their families to enjoy right on the Hudson River, and I thank Governor Cuomo for leading the way forward to develop this project. Alternative uses for the pier have been discussed for years, and today they're taking a step in the right direction. Pier 76 is sure to encourage more New Yorkers to use the waterfront, provide opportunities for local economic development and contribute to a more livable city for all."

Building and Construction Trades Council of Greater New York Gary President LaBarbera said, "Pier 76 will be transformative for the Hudson River waterfront and a boon to local tourism and economic development on the west side of Manhattan. I thank Governor Cuomo for moving this project forward and completing it in record time. Finishing Pier 76 in less than three months took the hard work and perseverance of government, labor and the private sector all working together, and they should be commended for their efforts. This new project will add significant open recreation space for New Yorkers, visitors and families."

The 1998 Hudson River Park Act required the New York City to transfer possession of the pier, at least half of which has to be used for passive and active open space. Following over two decades of stalled plans, Governor Cuomo renewed efforts to transform Pier 76 in his 2020 State of the State agenda. In January, New York City vacated and transferred control of the site to New York State, as required by a state budget agreement.  Planning for the long-term use of Pier 76 will be done by the Hudson River Park Trust, a joint city-state partnership that manages Hudson River Park under long-term property leases with New York City or the State.

Construction of Pier 76 began in 1962, when the rise of larger freighters and the advent of containerized shipments made the city's older, smaller piers obsolete. When finished in 1964, the covered pier allowed for the berth of two ships and measured 300 feet wide and 635 feet long. The structure also included an adjoining 615-foot-long bulkhead platform and shed.

Hudson River Park is a 550-acre riverfront park and estuarine sanctuary that runs from the northern boundary of Battery Park City in Tribeca, through Greenwich Village, the Meatpacking District, Chelsea, and Hudson Yards to West 59 Street in Hell's Kitchen/Clinton, and includes more than a dozen piers once used for commercial shipping. The park includes bicycle and pedestrian paths, tennis and soccer fields, batting cages, children's playground, dog run, and many other features.