Governor Andrew M. Cuomo today announced the grand opening of the first span of the new Kosciuszko Bridge – the first new bridge constructed in New York City since the Verrazano Bridge in 1964. The Governor celebrated the opening on the new bridge with Queens and Brooklyn dignitaries and community members. The grand opening included a celebratory march across the brand new bridge, with delegations from both the Queens side and the Brooklyn side meeting in the middle to kick off the celebration. The Governor also drove across the bridge in a ceremonial first ride in President Franklin Delano Roosevelt’s 1932 Packard. The new span will open to traffic in both directions at 11:30 p.m. on Thursday night.

The Kosciuszko Bridge project replaces the existing 78-year-old bridge with two new state-of-the-art cable-stayed bridges – one Queens-bound and one Brooklyn-bound. The original Kosciuszko Bridge first opened in 1939 under President Roosevelt’s administration. Additionally, the $555 million Phase I project is the largest single contract the New York State Department of Transportation has ever undertaken – resulting in the construction of the Queens-bound bridge, which includes three lanes of traffic in each direction until the completion of Phase II. The new bridge will benefit approximately 200,000 commuters each day and has a service life of 100 years, ensuring its viability well into the future.

"New York is making unprecedented investments to revitalize our transportation infrastructure, ensuring that our roads and bridges are fully equipped to meet the needs of the 21st century traveler," Governor Cuomo said. "The opening of the first span of the Kosciuszko Bridge is a major milestone for New York City that will serve hundreds of thousands of commuters every day. This new bridge will ease congestion and improve our region’s transportation network while demonstrating that the Empire State continues to lead the nation in building state-of-the-art infrastructure projects that will serve New Yorkers for generations to come."

The FY 2018 Budget supports and expands upon New York State’s historic $100 billion infrastructure program – investing in the state’s aging roads, bridges and other critical infrastructure components. This unprecedented investment is critical to strengthening and hardening the state’s outdated infrastructure, safeguarding its sustainability for years to come.

Once the project is fully completed, the Queens-bound bridge will carry five lanes of traffic and the Brooklyn-bound bridge will carry four lanes, as well as a 20-feet-wide bikeway/walkway with spectacular views of Manhattan. Shoulders will be added to both bridges, where none currently exist. The new bridge will be lower than the original by 35 feet, decreasing the incline and allowing trucks and other large vehicles to maintain consistent speeds on the bridge, helping to ease congestion.

"The opening of the first span of the Kosciuszko Bridge is a major milestone for New York City that will serve hundreds of thousands of commuters every day."

In February, the Governor announced plans to implode two major sections of the old bridge this summer, clearing the way for Phase II of the project to begin in May of this year – a full seven months ahead of schedule. This will move up the expected opening of the Brooklyn-bound span to early 2020, a full four years ahead of schedule.

Tonight, the Governor will mark the grand opening of the Kosciuszko Bridge with a spectacular light show synchronized to music on multiple iHeartRadio stations. The light show is the first performance in “The New York Harbor of Lights” that will illuminate crossings with multi-color LED light shows that will be visible for miles. The shows will transform New York's already awe-inspiring structures into international tourist attractions, spurring additional tourism and economic activity for the region. The premiere of "The New York Harbor of Lights" will also include coordination with the lights of the Empire State Building.

The new Kosciuszko Bridge is New York City’s first cable-stayed bridge, featuring a total of 56 stay cables made up of approximately one million linear feet of steel strands. A cable-stayed bridge uses steel cables placed at an angle to connect the bridge deck to vertical towers that extend high above the roadway, with the pylon tower of the Kosciuszko Bridge measuring 287 feet high. Additionally, each of the 3,850 tons of structural steel used to construct the new bridge was manufactured in the United States. The bridge measures 1,001 feet in length and 99 feet in width. 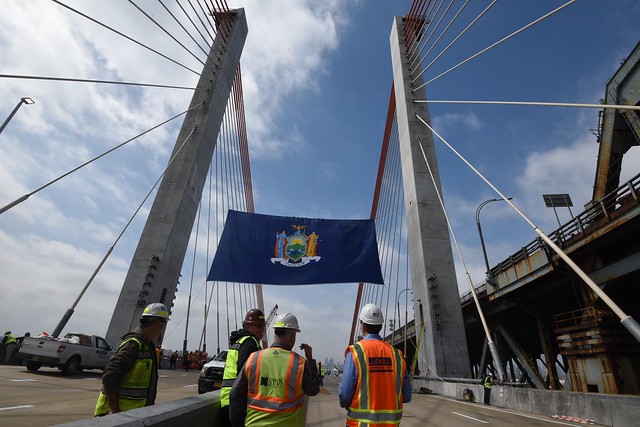 Design-build was essential in the completion of this project, pushing the timeline forward by four years. This model is being used across New York’s large infrastructure projects including on the New New York Bridge project to replace the Tappan Zee Bridge. Design-build contractors submitted proposals to design and build the bridge at the same time. The design-build process, implemented by Governor Cuomo, allows for the combining of design and construction services into single contracts to help expedite repair work to vital infrastructure and save taxpayer money. Funding made available as a part of Governor Cuomo’s NY Works program to create jobs was also a key component to completing the project. Additionally, the project to replace the Kosciuszko Bridge exceeded the 14 percent Disadvantaged Business Enterprise goals established by the Federal Highway Administration, totaling $83 million of DBE participation funding to date.

Congresswoman Carolyn B. Maloney said,“After years of planning and construction, I am thrilled that the first span of the new Kosciusko Bridge will finally be open for public use. With this bridge, we reinvigorate New York’s tradition of bold infrastructure projects that move our economy forward. The old bridge was widely regarded as the worst bridge in the state, and so I fought for, and secured $670 million in federal funds— nearly 85% of the total cost of building both spans—so we could start over and give Queens and Brooklyn a bridge to be proud of. Today we are thrilled to have a new, beautiful, state-of-the-art span in place of the old, crumbling, dangerous eyesore. I want to thank Governor Cuomo for seeing the first span through to completion, and look forward to continuing to work with him on the second span.”

Queens Borough President Melinda Katz said, "The accelerated construction of the new Kosciuszko Bridge is a testament to New York’s commitment and ability to deliver bold infrastructure improvements that are critical to keeping our state globally competitive. Hundreds of thousands of motorists will benefit daily from the state-of-the-art bridge. Thanks to Governor Cuomo’s vision, the stunning display in the New York Harbor of Lights will delight and inspire generations of residents and visitors."

Senator Martin Dilan said, "The opening of the first span of the Kosciuszko Bridge today shows the nation and the world that government can get things done. By working with our communities and providing construction jobs to New York’s many hard-working men and women, we will continue to successfully update our transportation infrastructure not only in New York City, but in every region of the state. I applaud Governor Cuomo for having the vision and determination to push this historic project forward."

Assemblymember Joe Lentol said, "The stunning new Kosciuszko is an iconic new addition to our skyline that will inspire New Yorkers for generations to come. This new bridge joins the likes of the Brooklyn Bridge and the Verrazano Bridge as a grand part of the New York City landscape. By replacing the unloved old bridge with a beautiful new cable-stayed span, Governor Cuomo has delivered relief for Greenpoint and once again proven what New York can achieve."

Assemblymember Catherine Nolan said, "The opening of the first span of the Kosciuszko Bridge connecting Brooklyn and Queens is a wonderful achievement for our great state. I would like to commend Governor Cuomo and the NYS Department of Transportation for making the right investments in our infrastructure."

Assemblymember Erik Dilan said, "The opening of the new Kosciuszko Bridge is a major accomplishment for New York State and will serve hundreds of thousands of commuters each day between Queens and Brooklyn. I applaud Governor Cuomo for investing in our state’s roads and bridges to help make the lives of New York’s drivers smoother and easier."

Assemblymember Jo Anne Simon said, "What was once a bottlenecked, deteriorating eyesore – the new Kosciuszko Bridge is now a safe, beautiful work of art. Made possible by the leadership of Governor Cuomo, this new bridge was constructed by the hard-working men and women of this state and I applaud our communities for supporting this historic effort."

Assemblymember Maritza Davila said, "With the opening of the new Kosciuszko Bridge, residents and visitors alike will be impressed by this wonderful connection between Brooklyn and Queens. The innovative design of the new bridge will help reduce traffic for commuters and improve the life of working class families. I thank Governor Cuomo for pushing this critical infrastructure project through to fruition."

New York City Council Majority Leader Jimmy Van Bramer said, "I have spent hundreds of hours stuck in traffic as cars and trucks attempt, and often fail, to dodge pot holes and uneven conditions on the old Kosciuszko Bridge. While other states bicker about crumbling infrastructure, we in New York get things done. Completing this project ahead of schedule is a testament to the leadership of Governor Cuomo, and I am thrilled about no longer having to dodge pot holes or wait for hours in traffic to cross the Newtown Creek."

Skanska USA Executive Vice President, Michael Viggiano said, "Skanska USA, lead partner of the Skanska-Kiewit-ECCO joint venture team, congratulates Governor Cuomo and the State of New York on the completion of the first cable-stayed bridge in New York City history. We commend the Governor for his vision of modernizing our aging transit systems and for illustrating the potential of design/build as our city, state and nation explore alternative methods for more rapidly and efficiently meeting our infrastructure needs."