Center Expected to Welcome More Than 114,000 Visitors Each Year and Generate More Than $23 Million Annually in Local Economic Activity

"The new National Comedy Center will serve as a tourist attraction and an economic game changer for Chautauqua County and the Western NY Region," Governor Cuomo said. "The National Comedy Center highlights some of the most memorable comedic performers the world has known and will serve as a destination for visitors from across the country. New York is proud to invest in comedy and the arts, as we work to foster economic growth and create cultural hubs statewide."

Construction of the project, which began when the Governor broke ground in August 2015, includes a new 6,000 square-foot building, which, combined with the renovation and adaptive reuse of two historic buildings, including the historic Jamestown Gateway Train Station, makes up the total 37,000 square feet of exhibit space.

The exclusive collections and more than 50 immersive world class exhibits focus on everything from late night comedy to slap stick, and humor as a powerful means for social activism. Visitors are taken on an interactive journey through comedy history, from early vaudeville acts to the latest viral memes. Cutting edge personalization technology is used to create a humor profile that is embedded onto a radio-frequency ID wristband for each visitor. This allows for customization of the exhibit experiences, and encourages reflection on, and education in, one's own sense of humor. It is one of the most technologically advanced attractions of its kind, and also touts a cash bar, and a Blue Room — where the more adult rated or off-color comedy can be found. There are also personal archives on display from people including Lenny Bruce, Rodney Dangerfield, the Marx Brothers, Charlie Chaplin, Jerry Lewis, Joan Rivers, Phyllis Diller, Jerry Seinfeld, George Carlin and more. Visitors will leave the museum with a profound appreciation for comedy icons and innovators, as well as the tremendous influence of humor on how we think, live and laugh.

The new National Comedy Center will serve as a tourist attraction and an economic game changer for Chautauqua County and the Western NY Region.

Project Chairman Tom Benson said, "Eight years ago, a small group of incredibly hardworking and dedicated people had the dream of making Jamestown America's home for comedy through the creation of the National Comedy Center. Due to the perseverance and blood, sweat and tears of that amazing group and the support that we received from our capital funders, including Governor Cuomo and New York State, this dream has become a reality that will change the face of Jamestown and provide long lasting economic benefits for all of Western New York. We have made the transition from people laughing at us to laughing with us and it feels great."

The National Comedy Center is supported by over $14 million in resources from the state, including $4.4 million awarded through a competitive, community-driven process with the Western New York Regional Economic Development Council; an additional $5 million through the Buffalo Billion II initiative; $5 million via New Markets Tax Credit Program; and other state sources. It is expected to attract more than 114,000 visitors each year and give a $23 million boost to the local economy annually, while also sparking further economic development and helping to improve the economic environment in the region. The National Comedy Center is anticipated to support over 200 jobs and generate $6.5 million in wages annually across Chautauqua, Cattaraugus and Erie counties.

"With significant investment and support from New York State, the National Comedy Center is set to be transformational for Western New York and the Southern Tier," said Lieutenant Governor Kathy Hochul. "The Center will be major draw for tourism and have a ripple effect across the region. Tourists will now be able to visit the natural beauty of Niagara Falls, stop by Buffalo to enjoy the fun at Canalside, and make a trip to Jamestown to visit the world-class National Comedy Center and all Jamestown has to offer. We are creating a synergy that will boost job creation and invest in the future of our economy."

Howard Zemsky, President and CEO of Empire State Development, said, "Jamestown found a way to preserve history, reuse old buildings and revitalize the city with the Comedy Center project. There is a strong sense of local pride as the region offers a one-of-a-kind attraction for tourists to find and enjoy, and I would encourage everyone to plan a trip to experience it for themselves."

State Parks Commissioner Rose Harvey said, "With Allegany State Park and hidden gems such as Midway and Long Point state parks nearby, the opening of the National Comedy Center will be an additional tourism boon to New York's Western Region," said State Parks Commissioner Rose Harvey. "This wonderful transformation is truly a special attraction that will surely be a place that will draw an international audience and will be something of great pride for all." 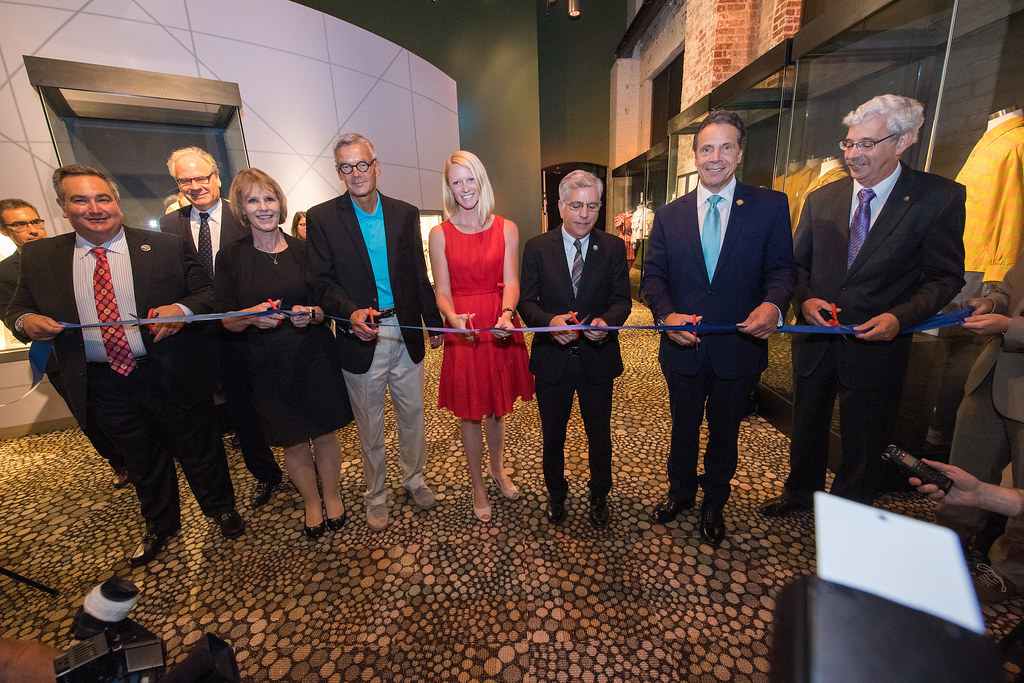 Since taking office 2011, Governor Cuomo has made unprecedented investments in the tourism industry throughout New York State, leading to historic levels of visitors and direct spending. In 2017, New York welcomed a record 243.8 million visitors who spent $67.6 billion, generating a total economic impact of more than $100 billion for the fourth straight year. Additionally, tourism is the state's third largest employer, supporting 938,800 jobs annually.

Senator Catharine Young said, "America's newest and most exciting destination is the National Comedy Center, a one-of-a-kind, spectacular showcase for the art of comedy that will put Chautauqua County on the map and provide an unforgettable experience for visitors of all ages. Inspired by Jamestown's own comedic heroine, Lucille Ball, and developed by internationally renowned cultural and interactive design firms, this world-class venue is poised to transform the economy of our historic city with a projected $23 million impact while placing Jamestown on the "top destinations" lists of travel reviewers everywhere. The path to this moment was forged by many dedicated leaders working in partnership towards a remarkable goal. My thanks go out to Governor Cuomo for his commitment to this project and the future of Jamestown, to the National Comedy Center's visionary and tireless leaders, and to state and local officials for supporting, facilitating and assisting at every turn. This amazing effort is a triumph of confidence and collaboration and has launched the start of a new era for our community."

Assemblyman Andy Goodell said, "Jamestown is serious about comedy. This project was no laughing matter. It involves state-of-the-art electronics, unique and interesting memorabilia, and incredible attractions. It is truly a national destination for those who love comedy and want to experience the best possible presentation of nationally-renown comedy acts."

Chautauqua County Executive George Borrello said, "I am so excited to see this unique, state-of-the-art attraction become a reality here in Chautauqua County and in Lucille Ball's hometown of Jamestown. We are proud to be the home of this entertaining and interactive experience that is an amazing tribute to the art of comedy. I want to thank the governor and Empire State Development for their commitment to this truly transformative project."

City of Jamestown Mayor Samuel Teresi said, "Support at the State Legislative level and throughout the administration (i.e., ESD, OPRHP, DOT, DOS, etc.) has been outstanding and in many ways, unprecedented. The major credit for the funding success of this project however, has to go directly to Governor Andrew Cuomo, who in my mind, took a personal interest in this project and drove it from the 45-yard line into the end zone. Over the past four decades, I have witnessed significant state financial assistance directed to numerous major local projects, but never to the extent of this, and with the personal interest and advocacy of the Governor himself."