Governor Andrew M. Cuomo today announced that the City of Fulton will receive $10 million in funding as the Central New York winner of the fourth round of the Downtown Revitalization Initiative. As in the first three rounds of the DRI, one municipality from each of the state's 10 regional economic development regions is selected as a $10 million winner, marking another overall state goal to target $100 million in funding and investments to help communities boost their economies by transforming downtowns into vibrant neighborhoods where the next generation of New Yorkers will want to live, work and raise a family.

"We challenged local governments through the DRI process to propose innovative ideas to create jobs and drive economic growth," Governor Cuomo said. "Fulton proposed a strong and feasible plan, and with this award they will be able to unleash the full potential of this unique location on the Oswego River, revamping the waterfront and downtown corridor to make this city more prosperous for residents and for visitors."

"Fulton is full of history and cultural attractions with stores and restaurants along the Oswego River," said Lieutenant Governor Kathy Hochul. "This funding as part of the Downtown Revitalization Initiative will continue the momentum of redevelopment to attract businesses in clean energy and health care, and increase the agriculture and food processing industry in the area. Local projects will strengthen infrastructure in the city, create more opportunities for residents and visitors, and grow the local economy of Fulton and the entire region."

The City of Fulton is located along the Oswego River, an area rich in history. It is home to nationally registered historical sites, retail stores, restaurants, banks, service organizations, and cultural attractions, with recent development setting the stage for the redevelopment of vacant sites and brownfields and spurring growth in the fields of clean energy, health, biomedical and biosciences, financial services, agribusiness and food processing, advanced manufacturing, and destination tourism. The City aims to "Blaze New Trails" by building on this momentum in its historic downtown waterfront and NYS 481 corridor, enhancing natural and cultural attractions, and continuing to grow opportunity in local health, service, and manufacturing industries. With a boost from DRI, the City will strengthen the infrastructure necessary to support downtown businesses and create recreational and cultural opportunities attractive to visitors and residents alike.

The Central New York Regional Economic Development Council went through a competitive review process of proposals from communities throughout the region and considered all seven criteria below before recommending Fulton as its nominee for winner:

Fulton's fourth-round DRI win entitles the city to receive $10 million in state funding and investments to revitalize its downtown neighborhoods and generate new opportunities for long-term growth. Fulton now joins the Cities of Oswego, Cortland and Auburn, which were the Central New York winners in the first three DRI rounds, respectively.

We challenged local governments through the DRI process to propose innovative ideas to create jobs and drive economic growth.

New York Secretary of State Rossana Rosado said, "I applaud the City of Fulton for creating a plan that showcases what Fulton has to offer and delivers on a promise of positive growth potential. Governor Cuomo's Downtown Revitalization Initiative will boost Fulton's renewal, and carry the entire region along with it."

New York State Homes and Community Renewal Commissioner RuthAnne Visnauskas said, "Over the past eight years, Governor Cuomo has invested $231 million in Central New York, which has created or preserved affordable housing for more than 8,000 residents. The commitment to building a stronger future for upstate communities continues today in Fulton with the $10 million Downtown Revitalization Initiative award.  These state resources will help build dynamic communities and support businesses which will keep Central New York rising."

Senator Patty Ritchie said, "Through the Downtown Revitalization Initiative, the City of Fulton will receive the support necessary to transform its downtown," said Senator Patty Ritchie. "I would like to thank Governor Cuomo for recognizing Fulton's potential, and congratulate local leaders on a job well done. I look forward to seeing how the projects announced today help to revitalize the community, create jobs and foster economic growth."

Assembly Member William Barclay said, "Fulton's location on the Oswego River, combined with its many historic sites and overall spirit makes it the ideal winner of Governor Cuomo's Downtown Revitalization Initiative. This competition brings out the best in our communities and I am proud to see Fulton get its due recognition."

Assembly Member Brian Manktelow said, "This is good news for Oswego County and the people from my district who work in Fulton. Hopefully, this will create more economic opportunities and employment for the greater Oswego County area. This should positively impact residents, businesses and visitors."

Central New York Regional Economic Development Council Co-Chairs Randy Wolken, President & CEO of the Manufacturers Association of Central New York and Deborah Stanley, President of the State University of New York at Oswego, said, "The Downtown Revitalization Initiative funding will help to invigorate Fulton's downtown area by transforming the city center into an even more attractive community for both current and future residents. By working to attract jobs and private investment, the DRI is truly building momentum for not only Fulton but for the entire region, helping Central New York to rise."

Oswego County Legislative Chair James Weatherup said, "Thanks to Governor Cuomo's Downtown Revitalization Initiative and the work of the Central New York Regional Economic Development Council, Fulton is looking at great things in the future. The targeted investments will spur further growth, bring more visitors and solidify Fulton's role as a jewel on the waterfront."

Fulton Mayor Ronald L. Woodward Sr. said, "We are immensely proud of our community, as Fulton has won the fourth round of Governor Cuomo's Downtown Revitalization Initiative. This means our city will bring new development to life, rehabilitate old buildings and vacant sites and set the stage for further growth and more visitors. Thank you to Governor Cuomo and the Central New York Regional Economic Development Council for considering and selecting our community." 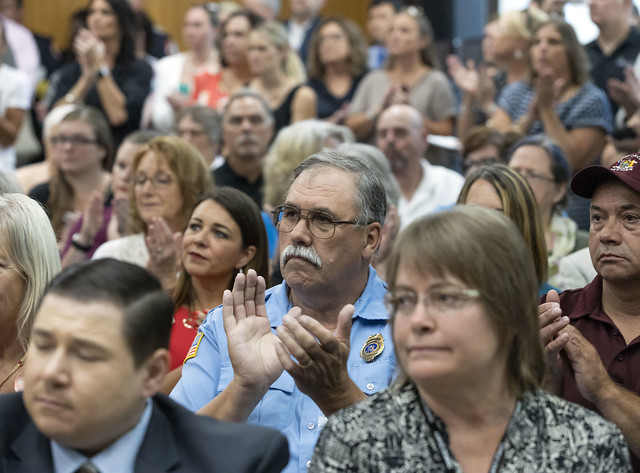 Fulton will now begin the process of developing a Strategic Investment Plan to revitalize its downtown with up to $300,000 in planning funds from the $10 million DRI grant. A local planning committee made up of municipal representatives, community leaders, and other stakeholders will lead the effort, supported by a team of private sector experts and state planners. The Strategic Investment Plan for downtown Fulton will examine local assets and opportunities and identify economic development, transportation, housing, and community projects that align with the community's vision for downtown revitalization and that are poised for implementation. The downtown Fulton Strategic Investment Plan will guide the investment of DRI grant funds in revitalization projects that will advance the community's vision for its downtown and that can leverage and expand upon the state's $10 million investment. Plans for the DRI's fourth round will be complete in 2020.

Today's announcement complements "Central NY Rising," the region's comprehensive blueprint to generate robust economic growth and community development. The State has already invested more than $5.6 billion in the region since 2012 to lay the groundwork for the plan - capitalizing on global market opportunities, strengthening entrepreneurship and creating an inclusive economy. Today, unemployment is down to the lowest levels since before the Great Recession; personal and corporate income taxes are down; and businesses are choosing places like Syracuse, Oswego and Auburn as a destination to grow and invest in. Now, the region is accelerating Central NY Rising with a $500 million State investment through the Upstate Revitalization Initiative, announced by Governor Cuomo in December 2015. The State's $500 million investment will incentivize private business to invest well over $2.5 billion - and the region's plan, as submitted, projects up to 5,900 new jobs. More information is available here.