Governor Andrew M. Cuomo today announced the recommendation of the Army Corps of Engineers regarding four initial sites in New York State for locating temporary hospitals - the Jacob K. Javits Convention Center, and locations at SUNY Stony Brook, SUNY Old Westbury and the Westchester Convention Center. Over the past days, an inspection team led by the Army Corps of Engineers, and including state officials from the Office of General Services, the Dormitory Authority of the State of New York, the Department of Health and the New York State Division of Military and Naval Affairs, has visited more than a dozen sites to review for temporary hospital use. Upon the Governor's determination, the Army Corps is expected to immediately begin work to construct the temporary hospitals. The Governor is also requesting FEMA designate four field hospitals with 250 beds each for the state, intended for use in the Javits Center in addition to the temporary hospital to be constructed by the Army Corps.

Governor Cuomo also announced that the state is taking new actions to increase the supply of personal protective equipment - or PPE. The state has identified two million N95 masks for purchase and will send one million to New York City and 500,000 to Long Island. Apparel manufacturers in the state are converting their operations to begin manufacturing masks and other medical equipment, and the state is also exploring manufacturing masks. Additionally, the state is gathering ventilators from different health facilities from across the state to be used in the most critical areas and has already purchased 6,000 additional ventilators.

The Governor also issued an executive order temporary closing the Department of Motor Vehicles for all in-office visits. Online transactions, including for license renewals, are still be available. License and permit expirations will be extended.

The Governor also announced that federal government approved New York's request for a major disaster declaration that allows FEMA to step in financially and assist the state. Under the current declaration FEMA will pay 75 of the funding and New York is responsible for 25 percent. The Governor is urging the President and his administration to grant a 100 percent federal cost share under this declaration. The Governor urges the federal government to quickly grant the state's pending request to support homeowners through additional individual assistance programs and statewide hazard mitigation assistance.

After meeting with the Army Corps of Engineers and hearing their recommendations, we stand ready for the building of temporary hospitals at four facilities in New York State.

The Governor is also asking New York's Congressional delegation to modify federal coronavirus legislation to ensure New York is eligible for $6 million in aid. Due to a current technical issue in the bill, New York State is not eligible to receive aid.

Additionally, the Governor announced that State Department of Health Commissioner Dr. Zucker has recommended trials for new drug therapy to help combat COVID-19. The FDA is acquiring 10,000 doses of Hydroxychloroquine and Zithromax for New York State to use on a trial basis. 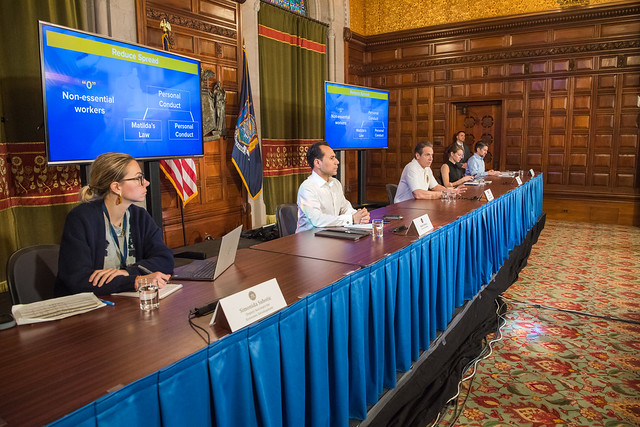 "Every day we see the number of cases of novel coronavirus continue to rise, and we know that by all projections we're going to have more hospitalizations than we can deal with in our healthcare system," Governor Cuomo said. "We have a plan of action to help stop the spread of this virus, including expanding hospital capacity and identifying new hospital beds, and after meeting with the Army Corps of Engineers and hearing their recommendations, we stand ready for the building of temporary hospitals at four facilities in New York State. This is a public health crisis, but worse than the virus is the fear, but we have a plan and we are doing everything we can to keep the people informed and save lives."